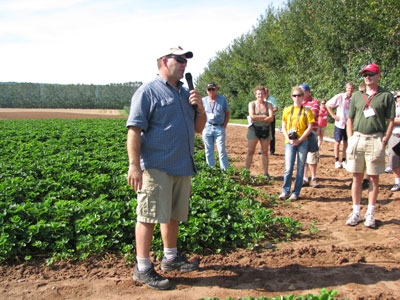 Jeff Allen received a mid-August visit from some of his customers.

The 65 delegates of the North America Strawberry Growers Association stopped by the G.W. Allen Nursery in Centreville in the Annapolis Valley on the first day of their two-day visit to Nova Scotia.

Allen, who took over the nursery nine years ago from his father, Gilbert Allen, told his visitors it is hand-intensive work and off-shore workers are essential. Jamaican workers do most of the harvesting, sorting, packaging and shipping of the certified nursery stock grown under the regulations of the Nova Scotia Strawberry Nursing Stock Program.

Allen explained there is a three-year production cycle for strawberry nursery stock, with the acquisition in the first year of newly bred lead stocks from the Atlantic Food and Horticulture

Research Centre, followed by the foundation year for the growing nursery plants, and in the third year, harvesting of the certified strawberries for growers in Florida, the northern U.S. states and Canadian provinces.

Southern plants harvested throughout September to meet the demand from Florida growers are shipped in October.
“It is a challenge to get the plants to Florida growers when they want them,” said Allen.

After harvest, the the Florida-bound plants are hand-sorted on a table in the packing house. The pickers and sorter on the table remove the mother plants, small plants and vines, and discard them.

The Florida plants are then packed and wrapped in plastic in a box so they will not dehydrate during the trip. The plants are cooled to 2 C and will be shipped within two days, Allen said.

Northern plants are harvested in November and are then placed in cold storage at 2 C for later shipping. Allen has found that the refrigerated plants grow better for producers.

Before refrigeration, the pickers and sorters remove the leaves of the northern plants, place them in bundles of 25 plants and pack them in plastic or wood boxes, 500 plants to a box.

“We find we have to have an air flow around them at all times,” once they are in storage, Allen explained.

“We try to harvest as many plants as we can in the fall but they have to be dormant before we are able to harvest 100 per cent.”

Once the plant is dormant, it is less susceptible to stress, he said.

Any unharvested plants are mulched well in November and harvested next spring, he said.

Florida berries are short-day varieties, while northern strawberries are long-day plants. Florida cultivars are also either developed in that state or California, said Allen.

He added that nursery strawberries should be planted in light soil, so when they are lifted, their roots will come clear of the soil.

His plantlets come from his own farm or other certified nurseries.

“As a nurseryman, we have to decide three years ahead what to plant,” Allen said.

In 2012, he needed only 50 per cent of the southern cultivar, Treasure, so he ploughed down the rest on its eight-acre plot, noting that he will not grow any more than two acres of any given northern variety.

In 2012, Allen grew three southern varieties on 60 acres, planting Treasure about April 20 for harvesting between Sept. 20 and 25. Southern varieties he has grown over the years include Festival, Radiance, Winter Star, Camino Real and Treasure.
Allen practises a three-year crop rotation, followed by fall rye that he ploughs down as a green manure.

Allen harvests two to three acres of nursery plants every day and then spends five weeks packing for Florida growers, followed by another six weeks for northern producers.

Following their visit to the G.W. Allen Nursery, NASGA delegates stopped at the strawberry nursery of Charles Keddy near Kentville, N.S., for supper. Keddy is a past-president of NASGA.