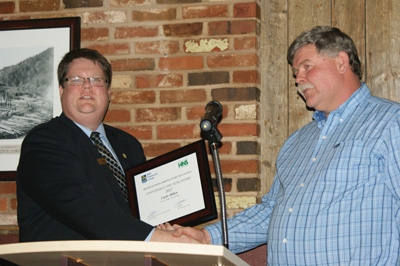 “It’s been a long road,” said Curtis during his acceptance speech. “I think we all need to look to be innovative about what we do going forward. I think it’s important. I think those of us that survive and thrive in the future will be people, young farmers, who are innovators and looking for opportunities.”

Curtis received his start in strawberry farming at the age of 14 with the help of Noble Spencer, a local farmer who would go on to be Millen’s mentor, partner and friend.

In June of 1980, Curtis purchased his first piece of scrubland in Little Dyke. He cleared it and planted strawberries. This piece of land is now part of what the Millen family call the Home Farm of their farming operation.

His partnership with Noble ended in 1984 and Curtis married his wife, Ann, in 1985. In 1986 and 1987, the couple dabbled in northern nursery stock and strawberries, ultimately learning that business wasn’t for them. In 1988, they tried a shipment of nursery plants to Spain but the freight ended up being too costly. In 1989, the Millens started producing southern nursery stock for the Florida market.

In the early 1990s, Curtis and Ann purchased a farm with blueberries. They raked and sold the blueberries to a processor but Curtis felt that he could do better.

“And he was right,” said Harris.

A year later, Curtis discovered that the Nova Scotia Agricultural College had a small processing line. He tried running his blueberries over the NSAC line. While it worked, it wasn’t really what Curtis was looking for. He continued to explore his options and ventured to Maine where he found a blueberry line more to his liking.

“He purchased one. And then he purchased two. Now he has six of those blueberry lines,” said Harris.

During the 1990s, the Millen family also opened the Strawberry Man Farmers’ Market. Curtis wanted to supply local fresh product to customers while also educating the public on the different varieties of strawberries available.

This proved successful until a new toll highway opened in the area. Curtis made the decision to turn the market into offshore housing due to a shortage of local labour. In 2001, the Millens had their first 10 offshore women arrive.

To make up for the loss of the farm market, Curtis made portable Strawberry Man huts and sold directly to the public in the Halifax area.

In 2009, after some investigative travel, Curtis purchased the operation’s trace-back scanner system, becoming the first producer in Nova Scotia to use the FreshQC system. The system tracks when and where in the field each box of fruit is picked and by which picker.

“Curtis always strives to do his best and better,” said Harris. “He has built a reputation on this by always growing the best quality possible.”

Curtis and Ann have four boys, ages 20 to 25, plus one grandson. Two of the boys work with their parents on the farm and are looking at entering into their own farming ventures. The family now fruits and picks 130 acres of fresh strawberries and 25 acres of strawberry nursery plants, and fresh packs 200 acres of wild lowbush blueberries.

“Curtis has come a long way from those six rows of strawberries at age 14,” said Harris. “And the story is evolving.”

“My situation was unique,” said Curtis. “It was a man 57 or 58 years old who gave a boy who lived two houses down an opportunity. That’s where it came from. It was my mother that went to that field and helped me pick the first berry. She still goes to that field today … and that’s 37 or 38 years later. It’s been a unique journey.”