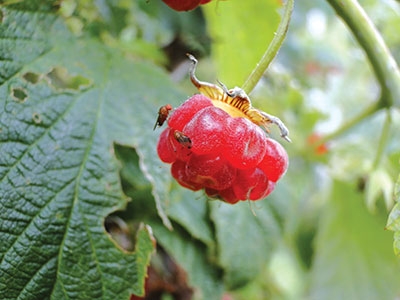 Spotted Winged Drosophila (SWD) has been present in British Columbia fields and orchards since 2010. Despite a joint effort from government and industry researchers in B.C. and throughout the Pacific Northwest, the 2013 growing season was the worst year for SWD infestation on record.

At the Horticulture Short Course, held during the Pacific Agriculture Show in Abbotsford, B.C., a grower, packer and crop consultant came together to share what they learned about managing this persistent pest and protecting B.C. berry crops and markets.

“Spotted Winged Drosophila is a very fancy name for a nasty insect that has become a palpable thorn in our back,” says grower, Sukh Kahlon. “It has complicated the harvesting process which was complex to begin with. [2013] was a difficult year, but was that the worst, or is it going to get worse? The best thing we can do is manage SWD to mitigate it rather than eradicate it.”

Building from his own experience, Kahlon encourages other growers to keep informed, have a control program in place that includes a spraying schedule and cultural practices, and to have the resources in place to execute your program.

“One of the things we should look at is regional information and know what’s happening in the Pacific Northwest,” says Kahlon. “The fact that Oregon is a week to 10 days ahead gives us an insight into the future. Last year we got the news that Oregon was finding larva in their earliest raspberry harvest. That was a red flag for us and I think we should use that to our advantage.”

A number of different reports are available for growers online, making it easier to know what is happening with SWD in specific areas. The B.C. Ministry of Agriculture provides weekly reports on their website, and many growers subscribe to the Peerbolt report.

As in years past, maintaining regular spray intervals, and rotating chemicals used in pest control are important factors in keeping SWD numbers down while managing for pesticide resistance. Current field trials have demonstrated that growers should spray every seven to eight days.

“Work with your neighbours,” says Kalon. “There’s a lot you can learn and you can coordinate your program. With all of the chemicals that we are using, we risk overusing them. It will be to our advantage to rotate through the chemicals and use different chemistry as much as we can.”

According to Chuck Mouritzen with Southwest Consulting, infield monitoring on your farm with traps is not an effective way to coordinate spray schedule. He recommends growers take their lead from regional trapping program results.

“You’ll get an idea of trend results with the populations so you’ll have a good idea what you are going to face and can get the control measures in place,” he says.

Once fruit starts to mature, Mouritzen recommends growers do salt extraction testing to get an accurate measure of larval infestations, and to help make sure the spray program is working. If levels are high, it’s important to adjust the program. Growers also need to be prepared to start picking as soon as fruit starts ripening.

“Last season we got early heat and the early fruit wasn’t treated because it wasn’t being picked so we really missed it,” Mouritzen explains. “Prepare yourself for early pick season, or at least for early ripening before you start picking.”
Effective pruning is another tool to help growers reduce infestations. The goal is to concentrate the ripening period and eliminate canes that are not going to produce marketable fruit.

“Pruning is a simple way to reduce the pressure and concentrate the quality fruit,” says Mouritzen. “It is more of a problem with the newer growers. There are a lot of newer people in the business, and to get them pruning properly is really important.”

Ultimately, the take-home message from the 2013 season is simple – everyone has to work together to control this pest or the entire sector is under threat.

“By not having control of this pest you are really risking your own fruit as well as your neighbours fruit. The key for packers and growers is understanding the threat posed to our industry from this pest,” says Mouritzen.

Steve Phillips of Berry Hill Foods in Abbotsford, B.C., agrees. He points to close communication between growers and packers as one of the keys to success identified by, particularly when it comes to managing pesticide sprays and residues.

“We have to spray so much more now, and pesticide residue testing is really accurate,” says Phillips. “If the pesticide residue is too high in a load, it’s a total recall. It’s also important to work with packers to make sure that pesticides used in fields are registered in the countries that they are selling to.”

Picking times are as important as spray intervals when managing SWD. The days of letting ripe fruit hang and gain weight is over, says Phillips. Despite the high SWD in 2013, he came out of the experience confident that growers have the tools and motivation to keep the pest under control.

“With proper use of pesticides, communications and relationships with packers, SWD is very manageable,” he says. “If you have SWD, you are going to get downgraded and that’s less money in your pocket.”