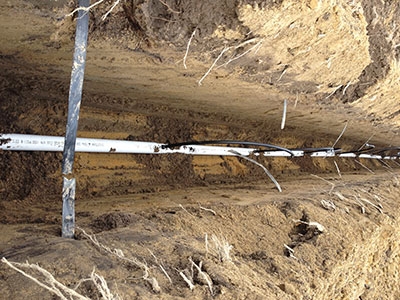 The idea for the subsurface irrigation concept started with the installation of a simple lawn watering system at the home farm. Robert Judge and Todd Boughner planned a field irrigation pattern, sourced components, and began designing and building the equipment. Contributed

The weather has traditionally always been a troublesome and challenging aspect in farming. It was a couple of years ago that the particular weather challenges – the heat and drought of 2012 – became a turning point at J&S Judge Farms in Norfolk County, Ont. It was at that point they decided to go ahead with removing much of the influence of weather over the harvest on their farm.

Field corn crop failure was a sad and stressful reality that year and owner Robert Judge and farm manager Todd Boughner didn’t want to see it happening again – ever. That year, they installed their farm-created subsurface drip irrigation system on 75 acres of their LaSalette farm (a purchased farm near their home farm). It’s a state-of-the-art wireless system that is now in the early stages of commercialization – and an economically-feasible approach worth looking at for field crop, tobacco, orchard and vegetable operations in Ontario and beyond. The creation of the system has also gained Judge Farms a Premier’s Award in agricultural innovation.

What happened in 2012 was a tipping point of sorts, a culmination that built on research and development that had already been going on for two years – spurred on by the sandy soil type of the farm, concern over future weather patterns and a desire for better and more stable economic returns.

“We are on what is called the Sand Plain of Norfolk County,” explains Boughner. “Normal yield per acre for corn is around 150 bushels, but on this land, we’ve been settling for 100 bushels per acre. That is not economically sustainable.”

Their quest to do better started four years ago with testing drought-resistant corn varieties, and a variety of projects completed alone and in partnership with various companies, researchers and suppliers. Over time, the focus came to rest on creating a system that optimizes water resources, economics and labour.

In addition to growing field crops (soybean and corn are the focus), Judge Farms also produce pork and poultry. J&S Judge Farms also has eight year-round and two seasonal employees on the home farm, who are all highly valued for their expertise and experience.

The subsurface irrigation concept all started with the installation of a simple lawn watering system at the home farm.

“It made us think about the possibilities,” says Boughner. “We started having discussions with local irrigation suppliers about subsurface systems for crops, but there was no data or experience with these types of systems anywhere near Canada – just in the southern U.S. where the heat is so strong. The only thing here was surface drip irrigation.”

Robert and Todd realized that if they wanted to proceed, they would have to blaze the trail. They planned a field irrigation pattern, sourced components, and began designing and building the equipment.

“It took time to determine an optimum irrigation schedule, and to create a wireless monitoring system to regulate water flow,” Boughner says. “We had input from local suppliers and Netafilm of Florida. Blake Farm Equipment in Simcoe who had previous interest and experience helped in applicator design and system developments.”

They would also require a farm pond, which they created but then needed a permit to draw from.

“The small water usage requirements with sub-surface irrigation made it easier to obtain the water-taking permit in comparison to conventional technologies,” Boughner explains. “It’s about half the water usage. A pond that supplies at least 100 acres of overhead watering can supply 200 to 250 acres of sub-surface drip. The whole farm can receive 0.24 inches of water in 18 hours with no labour involved. It’s all automatic.”

While the capital cost is about $1,500 per acre, Boughner says the system will reach cost return in a few years. They can reasonably forecast an increase in corn yields by 100 bushels per acre, and at $7 per bushel, that brings quick returns. Boughner notes that the farm business income will increase dramatically, and the ongoing workload and operational cost is minimal. Only one person is needed to monitor the system, and it will be 15 to 20 years before major replacement work will be needed.

This farmer-developed and proven technology is attracting a great deal of farmer interest.

“Alleviating moisture stress not only helps ensure a good harvest, but also enhances overall plant health, so they are better able to withstand disease and insects,” Boughner says. “Tobacco farmers are interested, and orchard farmers want to install it in new plantings to optimize success and protect drip tape from rodent damage. Vegetable farmers are interested too. It’s all about minimizing labour while maximizing yields and so who would not be interested? Farmers are willing to invest in improvement to their land more rapidly than we thought would happen.”

Supplier companies are also interested, but Boughner says they are moving forward at a sensible prudent pace. He says suppliers need to develop application equipment of sub-surface drip tape that is wear-resistant and adaptable to different width rows, depth of tape, soil conditions and so on.

“We foresee that farmers will install the system either by renting the equipment and doing it themselves or getting a company to custom-install,” Boughner notes. “Having this system fully commercialized will tie in existing irrigation suppliers that have a knowledge base and inventory, but they must be ready to service, design, and install the system. We feel that landscape and drainage companies might also be beneficial partners in the future to build the market for the technology.”

Farm equipment suppliers might also be involved, as well as researchers, seed stock companies and chemical companies. The drip tape and supplies used in the Judge Farms installation was sourced from a local supplier, but Boughner notes that local manufacture could create jobs as well.

“Farmers have a challenging time these days, and if they can maximize underutilized owned or rented land in close proximity to the home farm, that is very beneficial to the bottom line,” he says. “Land values are escalating at a rapid pace making maximum utilization of every acre important.”

He explains that the Sand Plains on which Judge Farm sits extend from Ayr (by Kitchener) to Simcoe up to Aylmer and along the north shore of Lake Erie.

“Many thousands of acres are grown on coarse-textured sand plains in Ontario and in the U.S., and drip irrigation is a viable option,” Boughner notes. “Maximizing the utilization of [this area] is not just a local issue. We hope that this technology will provide a better future for farmers, and off-farm jobs as well.”