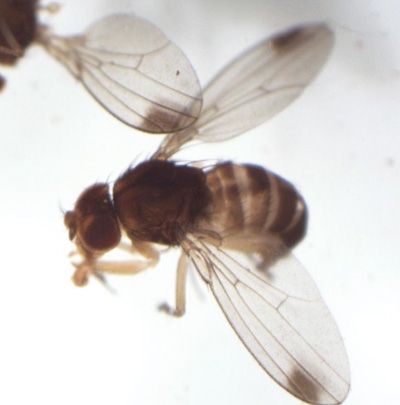 Cool, wet weather kept SWD levels low across most of the province and slowed infestations in some crops, but in the end SWD arrived in all of the fruit- and berry-growing areas of the province.

Researchers from across the Pacific Northwest region gathered at the Pacific Agriculture Show in January to share what they learned over the past season. Industry, academics and governments on both sides of the border have been working together to learn more about the pest to better inform control and management strategies.

Spotted wing drosophila, or Drosophila suzukii, is a small fruit fly that lays its eggs in ripe fruit on the vine. It is a threat to virtually all soft fruit and berries grown in British Columbia.

The alarm was raised when the pest was first discovered in a Fraser Valley berry field in the fall of 2009. It was initially believed that it would not survive the cold of winter. That was disproven when the pest emerged in the spring of 2010.

Researchers have found that the adult flies overwinter in the hedgerows and natural vegetation surrounding fields.

The flies have proven resilient to temperatures below -10 C, taking cover in the understory and ground debris to keep from freezing.

As temperatures warm, SWD populations start to build in the trees and wild hosts before they move into the borders of fields. The results of a study done by entomologist Tracy Hueppelsheuser from the B.C. Ministry of Agriculture and Lands showed a clear progression of SWD from the hedgerows into crop fields over the season.

“In blueberries, we caught flies in the hedgerows first, then about a week later in the field edge. That was in late May,” she says. “The field middle catches started in August, mostly during and after harvest.”

Results were similar in raspberries, where SWD was trapped in hedgerows and edges at the same time, but didn’t emerge in the middle of fields until two to three weeks later.

One of the most interesting findings for Hueppelsheuser was the delayed movement of SWD into berry crops. In a study looking at a comparison of trap catches of SWD to levels of fruit infestation, she found that early season fruit was free of SWD infestation. The results were consistent across all berry varieties in the trial, wild and cultivated.

“It was a surprise to me. I expected to see more flies as the season got later, but consistently with each variety, we did not see fruit infestation until mid-way through harvest,” she says.

“We had a pretty thorough monitoring system and collected a lot of fruit,” Hueppelsheuser explains. “I am confident in what we’re seeing, but I would like to see another year of this kind of data before I change the management recommendations.”

The late arrival of the flies could be a boon for growers looking to reduce pesticide applications. Currently, the recommendation to growers is to spray as soon as flies appear in traps, or the fruit starts to colour.

A comparison of trap catches to fruit infestation emphasized the importance of using different tools to monitor SWD. Trap catch rates were shown to be highly variable within and between fields, including some sites where no flies were caught but larvae were still found in the fruit.

“Don’t rely on the traps entirely to make your management decisions,” says Hueppelsheuser. “Traps are an important supplement, but making management decisions should be based on a variety of factors including crop development, time of year, monitoring methods and field history.”

The most accurate way to determine fruit infestation level is to put samples of ripe fruit in a sugar or salt solution.

After 10 to 15 minutes, larvae will leave the fruit and float to the surface, where they can be collected and counted.

Results gathered from the fruit infestation study supported the conclusions of the trapping work. They showed higher levels of SWD infestation in fruit collected from the edges of fields compared to the middle of the fields. The highest levels of infestation were found in fruit that remained in the field after harvest.

In addition to the variation within fields, there is significant variation in the level of infestation among different crops and varieties.

“The Elliott variety of blueberry appears to be much less susceptible to SWD – it had much lower rates of SWD than other late-season varieties,” says Hueppelsheuser. “Variety comparisons will be really important for growers to figure out how to risk-manage this thing. We will be doing more of that in 2012.”

Researchers also looked at strawberries for the first time in 2011, and the results are promising for growers. As with the other fruit, there was very little evidence of infestation until late in the season. On the whole, however, SWD was not a major concern.

“We found more Drosophila of other species than we did SWD in strawberries. Not every little white worm in a strawberry is an SWD larva,” Hueppelsheuser offers as a reminder to growers.

Growers looking for concrete results to base their management strategies on for the next season won’t find a silver bullet in the results of the past year. After a year of intensive fruit sampling and monitoring, the results showed that generally well-managed fields pay off with better fruit quality and less SWD.

“There are a lot of factors, but that’s what we saw,” she says. “When growers had bumpy fields, overgrown bushes or fruit on the ground, they tended to have more SWD.”

Once again, provincial extension specialists are encouraging an ongoing monitoring, holistic and region-based approach for effective SWD control. To keep up to date on monitoring and management information for growers for B.C., including pesticide registrations for 2012, visit http://www.al.gov.bc.ca/cropprot/swd.htm.

To build a better fly trap
The 2011 research season posed some challenges for SWD researchers, particularly when it came to catching the flies in traps.

In 2010, B.C. growers had two types of traps available to them, a commercially produced trap from Contech, and an improvised cup trap created by Agriculture and Agri-Food Canada researcher Sheila Fitzpatrick.

Since then, researchers have been trying different configurations and baits that will help trapping numbers more accurately reflect what’s going on in the field.

“Trapping worked well in the hot summer of 2010 when SWD were numerous in B.C. berry fields,” says Fitzpatrick. “However when SWD are less numerous, like in a cool rainy spring, we may need a different approach.”

U.S. Department of Agriculture (USDA) researcher Jana Lee from Corvallis, Ore., found that SWD prefer the colour red in the lab and field, and that traps with lots of entry surface caught the most flies. Others have developed traps with canopies, mesh tops, mesh side panels, and sticky bands. To date, no one has found the perfect design.

“Trap efficacy is climate-specific, and to some extent crop-specific,” says Fitzpatrick, who plans to continue work on trap design in 2012.

The number of traps, where they are placed and even the weather play a significant role in trapping success.

“In SWD, flies are seen resting in the canopy,” says Fitzpatrick. “Bushy crops provide humidity and shade so the insects don’t fly as much, but in open canopy crops they move more, and we find more in traps.”

Ultimately, the challenge is finding a bait that is as or more attractive to flies than the ripening fruit around them. Apple cider vinegar is the standard, and is particularly effective in the early season before fruit ripens. Adding a drop of dish soap to the bait lowers the surface tension of the liquid and catches more flies.

Another promising bait is a 40:60 combination of two per cent apple cider vinegar and 7.8 per cent red wine. Others have experimented with sugar and yeast combinations, as well as corn-based baits.