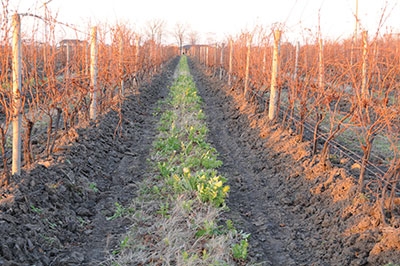 An example of tillage radish used in a vineyard for soil improvement. Anne Verhallen, Soil Management Specialist (Horticultural Crops), Ontario Ministry of Agriculture and Food and Ministry of Rural Affairs

Like many of his American counterparts – and an increasing number of Ontario farmers – Larry Richards is sold on tillage radishes as a cover crop.

“I would recommend them to anyone for improving the soil,” says the president of the Chatham-Kent Organic Epicentre in Dresden, Ont., where he grows field crops and garlic. “I grew them two and three years ago and again this year, and they are an excellent cover crop.”

Some of the benefits of tillage radishes are shared with many other cover crops, but some are distinctly their own. They are usually planted in August, growing to a potential depth of three feet and several inches across at the top until it’s -10 C for three or four days in a row. Tillage radishes are effective at controlling winter annual weeds and capturing nitrogen. When they decompose quickly in the spring, the radishes release many nutrients (especially nitrogen) into the upper portion of the soil, which is then available to the next crop. The holes left by the decomposed radishes provide water infiltration and soil aeration benefits. The decomposition also obviously increases soil organic matter, boosting yield to the following crop over the short term – and in the long-term with repeated use. They can grow knee-high or more before they perish, holding the snow so it’s a more gradual melt in the late winter.

In fields where Richards has grown them, he has had “absolutely no weeds.” He uses a seeding rate of four pounds per acre (tillage radishes are grown from a small round seed that’s described as easy to broadcast).

“I can’t get over how fast they decompose in the spring,” he says.

Indeed, the quick decomposition could be a problem in ground that’s prone to erosion, so experts recommend planting them in a mixture of cover crops. The rotting can also produce a strong odour over several days, or even weeks as the warm spring weather comes and goes, so you may want to have a proactive chat with your neighbours about it.

James Herrle of Herrle Farms near St. Agatha, Ont., started using tillage radishes about five years ago as a cover crop for his crops – sweet corn, strawberries, peas, beans, pumpkins and a few others.

“I grow lots of different cover crops, and wanted to see what rashes would do in terms of capturing and scavenging nutrients,” he says. “It’s hard to tell exactly how much of that is going on, but I’ve definitely seen benefits in the crop that follows. For example in the spring of 2013, we had two fields of sweet corn side by side, one that had had radishes on it and one that didn’t, and you could easily tell the difference. The radish field looked really good, with stronger yields and darker healthier-looking plants.”

Herle has found that radishes do better on drained soil or sandy soil, with a seeding rate of six pounds per acre more than adequate. He sees pockets in the spring from two to four inches in diameter after decomposition.

“I will continue to grow them,” he says. “They’re not the be-all or end-all, but the right fit on good soil. We are trying to pull nitrogen in, so we’re looking at other cover crops. I use oats, rye, red clover and peas and have mixed radishes with rye, but it might be better to get a pre-mix.”

“Down in Harrow, they are grown with tomatoes and other crops after wheat,” says the soil management (horticultural crops) specialist at the Ontario Ministry of Agriculture and Food and Ministry of Rural Affairs. “The vineyard owners are also using them.”

Verhallen says radishes have been used in Ontario as far back as the late 1980s, although they were not the exact variety now being grown.

“They have a place,” she notes, “but you have to think about what you’d like to get out of them. It’s worth giving them a try, but with care.”

On the pro side, Verhallen confirms that tillage radishes are heavy nitrogen scavengers and excellent at weed control, but are also very competitive if you’re growing them with something else.

“They are heavy nitrogen feeders as well, and so if you’re following an early-harvested crop like peas where there is still some nitrogen, or you’re adding some nitrogen through manure, you will get massive radishes,” she observes. “A one-year return should not be aimed for in terms of boosted yield for the crop that follows, as some of the N released by the radishes goes to feeding the soil.”

Verhallen also notes that multiple-year studies at Ridgetown, also involving the Woodstock area and fields in Michigan, have shown that nitrogen release by radishes can come too early to benefit the next crop.

“If it’s a rotation that includes other brassicas, I’d probably avoid them as they attract the same pests,” she adds. “A cover crop should diversify your rotation.”

Verhallen says mixtures of radish and rye seems to work well (radish leaves disappear to nothing as the spring progresses, so oat and rye will protect the soil a bit better in the freeze-thaw and rainstorms of that season). She recommends cover crop mixtures for a variety of reasons – not the least of which because different plants in the mixture do well or poorer in different areas of the fields.

“Mixtures are a good opportunity, and there are a lot of commercial mixtures available now,” she notes.

In terms of the ability of tillage radishes to break up compaction, Verhallen says she’s seen enough fields to say that you can’t compare the way a radish can do this with the way a more stable root like alfalfa can, for example.

“You can’t expect a radish to break through a moderate or severe compacted layer, especially in a dry year,” she asserts. “In this case, you will often see the radish root turn sideways. But the taproot can go sideways and then down if it can find a way down [through that layer] within a short distance.”

Tillage radishes “won’t do everything for you,” Verhallen notes, but do provide improved water infiltration, and improved soil aggregation and soil organism activity around the root in the rhyzosphere and around the taproot.

“It’s definitely feeding the soil, giving off enough root exudate to make the soil community quite happy,” she says. ❦