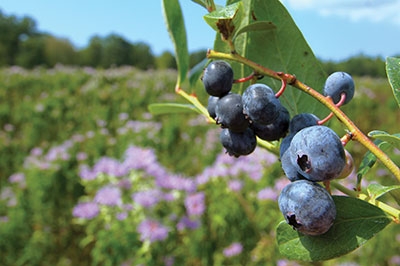 Inviting more wild bees to farmland is not only sustainable, but it also will pay for itself in four years or less. Rufus Isaacs

Investing in habitat that attracts and supports wild bees in farms is not only an effective approach to helping enhance crop pollination, but it can also pay for itself in four years or less, according to Michigan State University research.

The paper, published in the current issue of the Journal of Applied Ecology, gives farmers of pollination-dependent crops tangible results to convert marginal acreage to fields of wildflowers, said Rufus Isaacs, MSU entomologist and co-author of the paper.

“Other studies have demonstrated that creating flowering habitat will attract wild bees, and a few have shown that this can increase yields,” he said. “This is the first paper that demonstrates an economic advantage. This gives us a strong argument to present to farmers that this method works, and it puts money back in their pockets.”

As part of the study, marginal lands surrounding productive blueberry fields were planted with a mix of 15 native perennial wildflowers. The fields were pollinated by honeybees, but Isaacs and Brett Blaauw, MSU graduate student, were interested in whether increasing the wild bee population would improve pollination in nearby crop fields. The results weren’t immediate, which implies that landowners would need to be patient, Isaacs said.

Once the wild bees were more abundant, more flowers turned into blueberries, and the blueberries had more seeds and were larger. Based on the results, a two-acre field planted with wildflowers adjacent to a 10-acre field of blueberries boosted yields by 10 to 20 per cent. This translated into more revenue from the field, which can recoup the money from planting wildflowers.

With 420 species of wild bees in Michigan alone, it makes sense to attract as many free pollinators as possible. However, this doesn’t mean that this approach would replace honeybees, which are trucked in via beekeepers and pollinate crops valued at $14 billion nationwide, Isaacs said.

“Honey bees do a great job of pollinating blueberries, and we’re not suggesting that growers stop using them,” he said. “But, our research shows that adding some wild bee habitat to the farm can increase bee abundance in the nearby crop, can be profitable and is an insurance policy to make sure there is good pollination each year.”

Blaauw was the lead author on the paper and is now at Rutgers University. Isaacs’ research is funded by the USDA and MSU’s AgBioResearch.