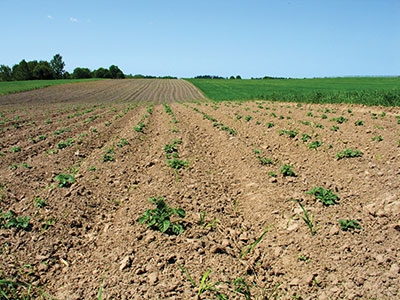 Pam Hutchinson, an associate professor at the University of Idaho, encouraged potato growers to time herbicide applications as close to emergence as possible.

Growers face a two-pronged challenge when trying to defeat weeds in a potato field. On the one hand, they want to kill the weeds; on the other, they want to grow potatoes.

This challenge was highlighted in two presentations Pam Hutchinson, an associate professor in the Department of Plant, Soil and Entomological Sciences at the University of Idaho, delivered at the recent Pacific Agriculture Show in Abbotsford, B.C.

Hutchinson made two key points to growers: herbicides should be matched to soil conditions to ensure developing tubers are adequately protected against competition, while being sure that the materials they’re using don’t stunt the growth of potato plants while they’re doing what they’re supposed to – suppress weeds.

Hutchinson came packing a tonne of data from research trials that underscored how tightly managed herbicide applications need to be for maximum effectiveness. The information reviewed work with Chateau, Outlook, Prism, Prowl H20, and the new offerings Lorox and Reflex.

Hutchinson said sandy soils may offer good drainage, but the same quality also lets highly soluble herbicides like Matrix and Outlook leach out of the rows, allowing weeds to take hold. She recommended Chateau and Lorox, which are not as soluble, in these conditions.

A less soluble herbicide, such as Prism or Metribuzin, can also provide adequate coverage in fields with heavier soils and prone to clodding.

She also encouraged growers to time herbicide applications as close to emergence as possible. While weeds can be taken out with a cultivator when potatoes have put out a couple of leaves, Hutchinson advised applying herbicides when the potatoes are hilled, which usually occurs four to eight weeks after planting.

“You’ll get the herbicides down where you need them and they’ll last into the growing season until a little beyond row close, when you start having a crop to help compete with those weeds,” she said.

But there’s another variable – the weather. Suppressing weeds is desirable, but potatoes are also susceptible to the effects of some materials. While they can metabolize products as diverse as Roundup and Chateau, little will happen without a good run of sun.

“The only way the potato can be safe … is to metabolize that herbicide, break it down to a non-herbicidal chemical,” Hutchinson said. “So if it’s cloudy or cool, the potato is not growing very fast and not metabolizing anything very fast.”

Hutchinson’s trials indicate that the plants can recover, but even a brief slowdown in the plant’s metabolism can lead to short-term stunting and a slight reduction in yield.

Outlook presents a different scenario. It’s typically applied at a higher rate, particularly on coarse soils, and this can lead to early season injury – leaf crinkling and chlorosis – if the weather at application is cold and cloudy. But once it warms up and the potatoes are growing, Hutchinson said there’s no reduction in yield.

A particular challenge for growers in Idaho, however, is protecting potatoes from the carryover effects of Roundup (glyphosphate) as well as dicamba and pyralids. The problem particularly affects seed potatoes, which get a dose late in the season when Roundup is applied in adjacent grain fields. Roundup drifts on to foliage, and from there, travels to the tuber.

Carryover of the material has dogged growers. It persists for up to eight months in tubers, stunting growth the following season. While potatoes can metabolize the herbicide, the process requires sunlight and warmth – something the tubers don’t get in storage.

While a high concentration can prevent sprouting, even small concentrations can inhibit emergence and be expressed in low vigour and foliar injury.

Recovery is possible, of course. Tests of seed stock from treated Russett Burbank and Shepody plants stayed hard and intact throughout the growing season – until the eight-month window required for metabolizing the glyphosphate was up. Then they started sprouting. Similarly, the granddaughters of affected tubers were fine.

To protect themselves, Hutchinson told growers to avoid cross contamination of their equipment, having equipment dedicated to Roundup if at all possible. Talking with neighbours whose fields abut their own is also a wise move, so that everyone knows when, where, and what concentration of Roundup is going on fields.