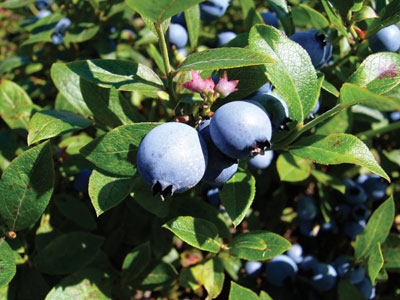 He stated the 2012 wild blueberry harvest was the most consistent year for yield in the past three years, with the peak yield year in 2003 with 57.3 million pounds from 36,000 acres.

“We have increased acres but we have not really increased our yield,” he said.

A late April cold snap damaged some of the fruit-bearing plants and there was scattered yet heavy Monolinia Blight pressure across Nova Scotia, said Burgess. He added that the mid-bloom period for wild blueberries was afflicted by a three to four week wet, cold period. There was also very heavy Botrytis infection and in some areas, up to a 50 per cent fruit bud loss.

Wild blueberry growers in 2012 also experienced excellent weed control with a dry July followed by timely mid-August rains, which saved the crop yield, according to Burgess.

Nova Scotia blueberry growers expressed a huge demand for pollination and 4,400 hives were brought in from Ontario, the first time hives have been imported into Nova Scotia, said Burgess.

New Brunswick had 31,000 wild blueberry acres in production in 2012, harvesting a crop of about 45 million pounds, with 31 million pounds alone coming from the Acadian Peninsula in northeastern NB. Pollination in the province occurred with 61,000 local hives, augmented by bees imported from Quebec and Ontario, noted Burgess.

Other parts of Eastern Canada also experienced a good 2012 wild blueberry season according to Burgess. Prince Edward Island had an excellent year with more than two million of wild blueberries harvested at 14.2 millions pounds. Quebec growers harvested 62 million pounds, while sustaining 15 to 50 per cent frost damage in some of their fields.