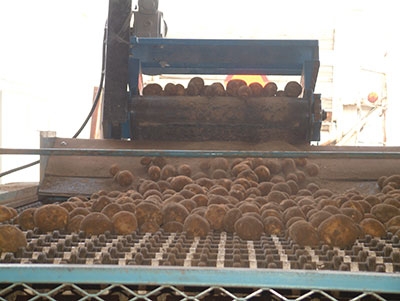 While no operation is perfect and some damage will always occur, any steps growers can take to improve crop management and handling will return a significant payback. Margaret Land

Potato growers are cruising for a losing position in the market if they don’t take bruising seriously.

That was the message Kiara Jack of ES Cropconsult Ltd. in Surrey, B.C., delivered at the recent Pacific Agriculture Show in Abbotsford, B.C., during a seminar focused on improving potato quality.

Bruising may seem minor but it’s the leading wound potatoes suffer during and after harvest, and in turn the leading way disease takes hold in tubers.

“Most of the major storage diseases enter through wounds in the potatoes,” she said. “It’s either the main way they enter your potatoes, or it’s a lot more likely that they will enter.”

With growers receiving approximately $540 a ton for potatoes, the cost of damage quickly adds up. Damage to one per cent of the crop will cost $5.40 a ton, and Jack said 10 per cent damage is “not uncommon,” meaning that growers face a hit of $54 a ton. With potato growers in B.C. harvesting 85,400 tons of potatoes last year, that means annual losses in excess of $4.6 million.

And that figure is merely the first hit growers take.

“That’s even before you’ve gone through and sorted your potatoes, taking that time and labour cost to remove the damaged potatoes,” she said. “And that’s without the disease that will set in if you have more damage.”

Because disease affects not just one tuber, it has a life of its own, and can quickly spread.

When consumers pass over a bag with one damaged tuber that looks unappealing, there’s a greater risk of the damage compounding and infection hitting other tubers in the bag. It’s not good for the grower’s reputation or the retailer’s margins.

To ensure only the best potatoes reach market, and remain in good condition, Jack gave growers a number of tips running from planting to post-harvest storage.

Gentle handling of the seed stock is important, but the field where the seed is planted should also be a gentle bed to lay them down. Rocks should be removed, both for the potatoes’ good and that of the machinery. Cultivating should be done in the fall, when conditions are dry, to avoid the formation of clods.

Jack noted that while sandy soils drain well, they’re not ideal for varieties that are susceptible to bruising. The soil will drop away rather than cushion the potatoes at harvest, increasing the possibility of bruising. She recommended Agata, Dakota Pearl, and Gemstar Russett, all bruise-resistant varieties, for sandy soils.

Good management of the field is important through the season.

Traffic through the crop should be kept to a minimum to prevent compaction of the soil. But equally important, ensuring the crop receives adequate potassium and calcium will improve resistance to bruising, while limiting nitrogen intake will facilitate better skin set.

Potatoes are also Golidlocks characters when it comes to soil moisture: too little, and the tubers will become dehydrated and susceptible to wounding; too much, and the skins will not set well, raising the chance of injury. Jack said soil moisture should be approximately 60 to 65 per cent in the week leading up to harvest.

The greatest risk of damage comes at harvest, when the mature tubers are handled in a variety of ways by machines and humans. While some of the damage can be mended, it’s better to prevent trouble before it happens.

A well-planned field will have the tubers at an even depth so that the harvester doesn’t need to be adjusted repeatedly, increasing the risk of errors that lead to tuber wounds. The digging blade should be aligned with the primary belt so that there’s an even rather than a bumpy ride for the tubers (for the same reason, equipment should be operated at capacity whenever possible). Jack went so far as to recommend padding the belt and avoiding shaker chains to ensure the potatoes have the smoothest ride possible to the truck.

And, when they get to the truck, the drop should be no more than six inches.

But when all else fails, growers have a chance to limit tuber damage by giving the potatoes a two-week recovery period. Stored at 13 to 16 Celsius at a relative humidity of 95 per cent, the tubers will have a chance to heal from light bruising. This is at the upper end of the 10 to 16 Celsius range considered ideal for harvest, but ensures the potatoes are in an ambient environment for recovery.

While no operation is perfect, and some damage will always occur, Jack said that any steps growers can take to improve crop management and handling will return a significant payback. This can include monitoring farm practices to establish a baseline for improvements, and determining where changes should occur and the effect those changes have.