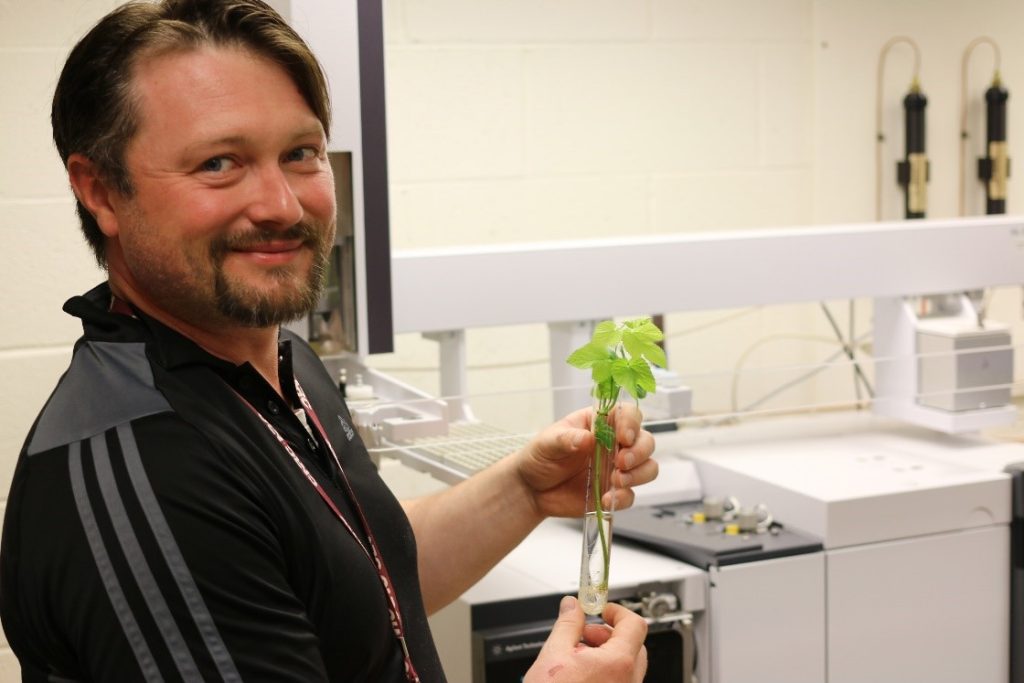 Jason McCallum in the lab. Photos courtesy of Agriculture and Agri-Food Canada.

Charlottetown is a craft beer-lover’s dream, with plenty of pubs and restaurants to choose from serving products from eight local microbreweries. But according to Agriculture and Agri-Food (AAFC) researcher Jason McCallum, the best beer in the city can be found somewhere a little more exclusive.

McCallum and colleague Aaron Mills are part of a team of AAFC researchers who have been adapting Maritime-grown wild hops into craft beer. It’s a project that makes use of the native hops growing in the East Coast and incorporates McCallum’s passion for plant chemistry.

“Some of the best beer is in Aaron’s basement,” he says. “It’s called the Hole in the Wall speakeasy, because there’s a hole blasted through his foundation where they put on an addition, and you have to walk through this little hobbit-hole to the back room where he has his taps set up.”

Jason grew up on a farm in Woodstock, Ont., where his family grew apples, green and yellow snap beans, sweet corn, and cabbage. His interest in horticulture began at a young age. “Plants are great little chemical factories, and produce hundreds and hundreds of things. So if you’re eating a fresh berry, you’re not getting one phytochemical, you’re getting hundreds,” he says. While finishing his undergraduate degree at the University of Waterloo, he focused on plant science and found his way to AAFC. Following a few student terms, he joined the lab full-time as a researcher.

It was the mystery box quality of the science that made him realize it was a good fit. “It’s like solving a puzzle,” he says of his work with plants. “You can get certain pieces of information from certain tools and you can put it all together like a logic puzzle to figure out what you’re dealing with. You’re always on the edge of the unknown, finding new things.”

“I love being puzzled. That’s what drives me to keep going back.”
– Jason McCallum, research scientist, phytochemist, Agriculture and Agri-Food Canada

Lessons from the locals

When McCallum moved from southern Ontario to P.E.I., he wasn’t really a beer guy. That changed when he met Mills, who was into home brewing.

Their research started off as a project examining the diversity of wild hops – which McCallum says are everywhere in the Maritimes and are an important ingredient in beer. He would be out in the bush, or even just out driving, and could spot a hops plant growing up a telephone pole. “If there’s wild hops growing here in the Maritimes, and they do really well without any kind of human intervention, why are we struggling so much to grow commercial varieties?” he says of his thought process.

Pursuing an answer to that question led to McCallum and Mills expanding their research into how well wild hops would perform in a commercial setting, known as a “hopyard.” Armed with only a few old guidebooks on P.E.I.’s native flora (GPS co-ordinates not included), the team found guidance from locals who had heard about the project through media coverage and knew where the hops grew. McCallum says that over three years the team found roughly one hundred wild growing populations, about half of which were volunteered by the public.

Field trips to find these wild hops were considerably more active than spending the afternoon in a lab. “They call it bushwhacking, and it really was bushwhacking,” Jason recalls. After a while, the team began to develop a “sixth sense” about where the best hops would be growing, their search taking them off the Island and all over the Maritimes. 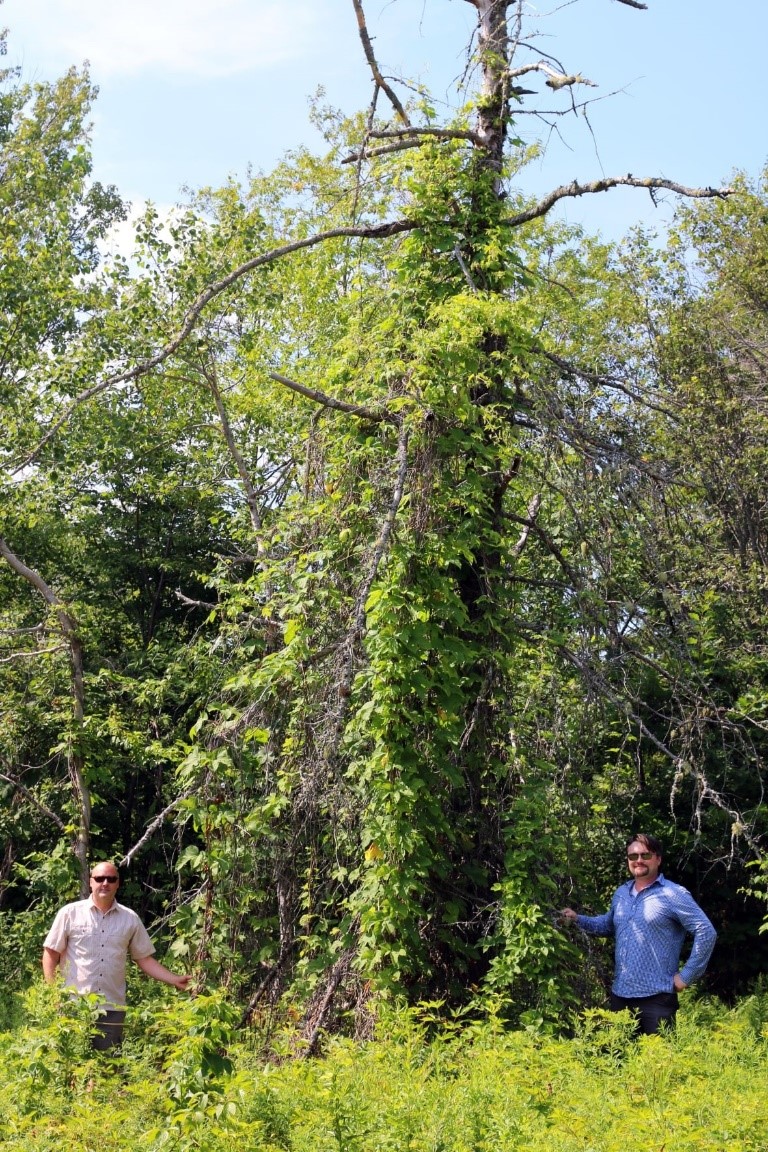 From the hopyard to the pint glass

A hops yard, according to McCallum, looks like “a vineyard on steroids.” The plants are kept in place by poles, but they tower 20 feet in the air. McCallum and his team are appealing to the smaller market of craft and home brewers, with a unique offering – craft brewers are always searching for new, attention-grabbing flavours, and mango, lemon and bubble gum are just a few that the researchers have encountered in the Maritimes.

What qualities make a variety of hops good for craft beer? According to McCallum, it’s about a balance between yield and performance versus novelty of flavour. “We’re looking for diversity in flavours, some kind of niche thing that would be unique, but at the end of the day if the hop doesn’t produce a lot of cones or generate much yield or doesn’t grow very well in the field, then it doesn’t make it as a commercial variety. You’re trying to balance those two things.”

The hops research has been successful, but the team has had to overcome some challenges. Normally the Maritimes experience a lot of rain and high humidity, but the past few years have been so abnormally dry that the team had to irrigate the hopyard themselves. Then, in 2019, Hurricane Dorian hit the East Coast at a Level 1, breaking about half of the poles in the yard.

Repairs were slated for the spring of 2020 – then COVID-19 hit. “The last few years have been tough on us,” McCallum says.

Despite the setbacks, he and his team are persevering and see a bright future for their work. New research began in April 2022, looking at how commercially sourced hops extract can be used as a biopesticide.

In the meantime, the researchers themselves occasionally enjoy the fruits of their labour. McCallum’s ideal beer, for the record, would be an IPA. “People say my taste buds are broken sometimes – I like the stuff that’s super, super bitter,” he laughs. “The hoppier, the better.”