New Maritime wild hop varieties have key characteristics that can add value to the Canadian brewing industry, namely, by introducing interesting flavours and aromas like melon, cotton candy and cucumber in the near future. 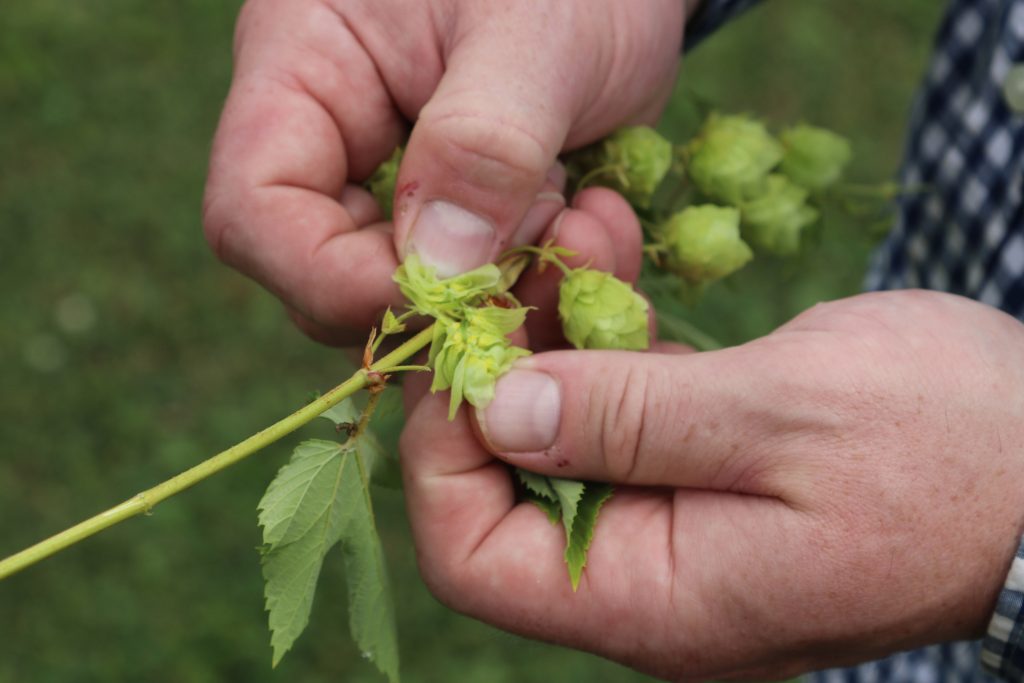 From 2015 to 2017, McCallum and colleague Aaron Mills, an AAFC agronomist, trekked across the Maritimes searching for wild hops and discovered more than 60 different wild-growing hop populations that were well suited to the cool, wet, Maritimes climate.

The newly acquired hops were planted at the AAFC Harrington Research Farm hopyard on Prince Edward Island. Since that time, McCallum and Mills have been researching the chemical composition of each variety to determine their origin, including which hops were brought to the Maritimes from Europe or other locations and which hops were native to the Maritimes. They also researched each hop’s potential value to the brewing industry.

While studying the characteristics of these varieties, the team made two interesting discoveries. Wild hops that are native to the Maritimes have increased levels of a key chemical that is attractive in the brewing industry, compared to hops native to western parts of North America or Europe.

Wild hops that are native to the Maritimes have increased levels of a key chemical that is attractive in the brewing industry, compared to hops native to western parts of North America or Europe.

“Maritimes hops have a naturally high level of alpha acids. This means they can be used for bittering the brew or to add various aromas and flavours,” says McCallum. “This is known in the industry as dual use and makes these varieties appealing to brewers.” 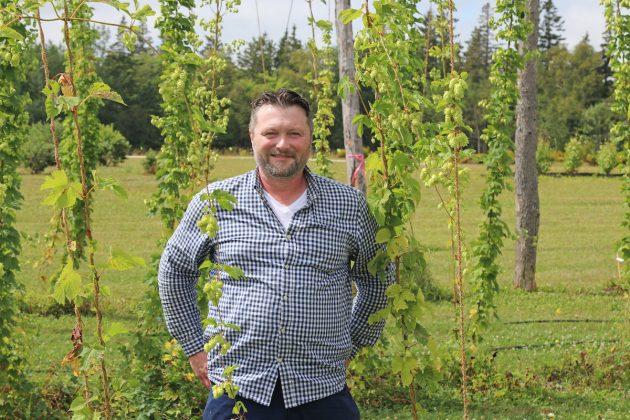 Jason McCallum stands among the wild hop vines in the vast hopyard at the Harrington Research Farm on Prince Edward Island. Photo courtesy of AAFC.

“We found a new identifier that makes it easier for breeders and researchers to distinguish authentic North American wild hops, simply by looking at chemicals in the leaves, rather than analyzing the chemicals found in the cones,” McCallum says.

After two years of collecting data about different hop plant’s disease resistance and chemical characteristics, a dozen of the highest quality wild hops have been chosen for further study in the second phase of the project.

“Our goal is to have five named commercial varieties of wild hops with unique flavours that are available to license at a minimal cost to growers across Canada,” McCallum says.

Making use of a product that is locally grown and offers unique flavour options helps Canada’s brewing industry innovate as well as develop new and diverse products consumers increasingly want. In order to launch the hops as commercial varieties, the team will submit additional data to the Canadian Food Inspection Agency Plant Breeders’ Rights Office over the next two years.

“The plan to apply for Plant Breeders’ Rights and possibly trademark these unique Maritime hop varieties could lead to a licensing opportunity for many hop growers,” says AAFC commercialization officer, Christina Stewart.

“This gives the growers access to a high quality wild hop suitable for commercial production to potentially meet the high demand from brewers across Canada.”

McCallum and Mills will partner with other producers across Prince Edward Island, Quebec and British Columbia to see if these Maritimes wild hops varieties can be grown in other parts of the country.

“If we can successfully grow varieties of Maritimes hops in other locations throughout Canada, we’ll get a better snapshot of their potential for commercialization,” says McCallum.

Those hoping to get a first taste of craft-brewed wild hops will need to be patient as Jason and Aaron perfect the formula over the next two-to-three years.

“There has been tremendous interest from brewers,” McCallum says. “Everyone is excited about the brewing possibilities with wild hops.”