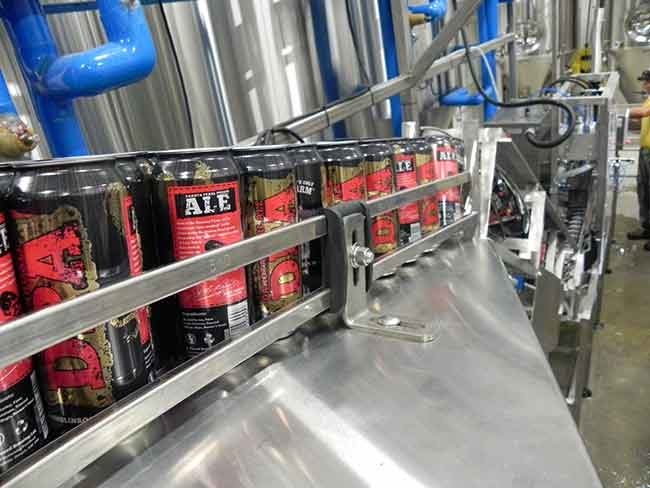 Ramblin’ Road’s Premium Dakota Pearl Potato Ale is directly related to the uniqueness of the kettle chips that John Picard started making when he bought the farm in 2004. Contributed photo

John Picard, owner of Ramblin’ Road Brewery in La Salette, Ont., was raised on a farm, worked tobacco fields through his teens and studied economics as a young adult. He always had it “in his blood” to return to farming.

That passion, in addition to things like new equipment availability, have allowed Picard to create Ontario’s first and only “brewery farm,” where he grows hops, makes beer, makes kettle chips and has created a very unique product that couldn’t be made anywhere else.

Picard’s brewery farm adventure began in 2004, when Picard found suitable property to purchase. In 2006, the equipment necessary for the production of craft beer became available, and he was keen.

“How to develop a craft beer business on the farm was the question,” he remembers. “We started with planting 3,600 hops rhizomes that year and it went well. It evolved into the brewery project, which started in 2010.”

By 2012, he and his team were proudly introducing the people of Norfolk County to their first locally brewed craft beer. Ramblin’ Road current offerings include a lager, ale and pilsner – as well as another brew that is very special.

The uniqueness of this particular beer is directly related to the uniqueness of the kettle chips that Picard had started making when he bought the farm in 2004. Picard wanted the snacks to stand out with a full-bodied flavour, and had come up with the idea to take the raw sliced potatoes and bathe them in beer stock to achieve this.

“Creating unique food products has always been a passion of mine, and the market for these kettle chips was already there,” Picard says. “People in bars and pubs are looking for local, unique and high-quality snacks. We just recognized this market and offered the consumer a distinct product in both processing and flavour.”

One day, Picard eyed the lager beer stock that they bathed the potato slices in, and wondered what would happen if he tried to take it all the way to beer. It was a simple lager, and using professional consultation, he was able to take the liquid and very carefully measure its acquired starches. It was hoped, and proven to be true, that the “potato sugars” would create a very distinctive smoothness in the final beer. These sugars, Picard would also learn, also offer a touch of sweetness from the start, which continues to evolve in the aging process, creating what he calls “an amazingly distinctive product.” In addition to measuring how much potato starch was present, Picard needed to bring it to a consistent volume in order to have the right final desired alcohol content. An enzymatic reaction process does the trick, controlling how much breakdown of starch occurs, allowing all processing parameters to be calculable and factored into the finished product, and eliminating all concerns for beer deterioration and oxidation.

Ensuring the process was repeatable was also a tough thing to accomplish.

“There are differences in potato quality, due to things like whether it’s a new crop or a stored crop,” Picard notes. “We didn’t know how the sugars would vary through the season.”

It took six months of trials to optimize the process and guarantee quality. At that point, Ramblin’ Road Premium Dakota Pearl Potato Ale was born.

“When we tasted it, it was fabulous and has been our number one seller since its introduction.”

Ramblin’ Road has seen a doubling in demand for both its Dakota Pearl ale and its kettle chips over the last two years, and this growth continues.

“We’re just beginning to establish networks for product distribution,” Picard explains. “Currently, we supply a few retail outlets from Chatham to the Bruce Peninsula. The snack products are seeing expanded market opportunities and great repeat sales. Locally, the beer distribution has been serviced primarily in Norfolk, with a few specialty accounts in restaurants in Oxford and the Kitchener-Waterloo area. This year, we are creating a delivery system for those enquiries outside of this area, and we currently have had over 20 enquiries.”

To create all his brews, Picard grows 3.7 acres of hops, with varieties that possess varying degrees of bitterness, flavouring and aromatics. Those currently used in production are Mt. Hood, Nugget, Fuggle, Cascade and Brewer’s Gold, with Centennial, Hallertau and Simcoe under cultivation for future use.

“Some hops have one quality and some hops have all three, and the combinations are incredible with our selection of cultivars,” Picard says. “We are learning every year how to improve our hops qualities and yields. In 2014, the moderate heat seemed to be a plus for the hops as we realized very good hops cones, the weather in combination with proper fertilization are key to a lush hops field. We’ve also built our own harvester.”

In 2015, Picard and his team expected to process hops for commercial sales. To prepare them for this after growing and drying, their alpha acid content must be measured, followed by hammer-milling, pelletizing and vacuum sealing into packages.

Picard points to marketing as another current challenge.

“We are a bit more cautious in the marketing side as there is a very competitive demand for limited beer tap space in most licensee establishments,” he says. “We choose to be in venues where the owner chooses his offerings based on his customers’ tastes rather than what is cheap and discounted for quick sale. We are sourcing markets for our kettle chips where we are able to maintain differentiation from the multi-nationals.”

Future plans include the development of more beverage and snack products.

“Just in December 2014, we launched our fifth beer – PurebRED, which highlights the true red qualities of roasted and malted barley, added to this is our elevated hops bitterness for a very well-balanced flavour,” he notes. “It is my hope that the market distribution/retail system will expand accordingly, as this seems to be lynch pin to connect consumers and local products. But I think that with the rise in consumer awareness and demand for these products, the distribution system will evolve or alternative avenues of accessibility will develop.”

Picard says winning a Premier’s Award in 2014 was a great honour, not only in that they recognize his efforts, but because they as a whole recognize that agriculture is continually and rapidly evolving.

“Projects like the Ramblin’ Road Brewery Farm are developments that you would not have seen 10 years ago,” he says. “Highlighting these unique and diverse expansions into agriculture is a great way to confirm with consumers that their food supply is indeed more local, traceable and defined. It’s truly a recognition that entrepreneurs will continue to enhance our food experiences and that agriculture is capable of continually surprising us.”