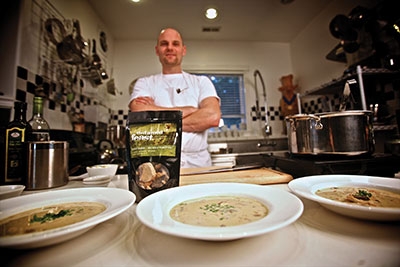 From the forest floor to your door – Untamed Feast believes the next consumer trend will be products harvested from nature.

An Alberta couple believes that edible foods gathered from the forest – particularly berries and mushrooms – is going to be the next big consumer trend.

An investor from the CBC television show Dragon’s Den, Arlene Dickinson, agrees, and has stepped up with $65,000 to become a business partner in the couple’s business venture

The company, owned by Eric and Michelle Whitehead, is called Untamed Feast and is headquartered in St. Albert, Alta. Their current focus is on non-cultivatable wild mushroom and mushroom-based products. The couple believes that they are on the leading edge of a new consumer trend.

“First it was organic, and then it was local, and we do believe that wild is the next trend,” says Michelle. “We’re very proud to be part of it. We really believe that the food is so good for you, it really is the most sustainable way to eat, and we are leaving such a small environmental footprint. We’re not disturbing the soil.”

She adds the business has become more than they expected since starting out in 2007 and their vision has grown dramatically.

“We’re very clear now that we want to be a patron of all things wild,” says Michelle. “We’re not just going to stop with mushrooms. We’re going to get into berries and stinging nettle is already in some of our mushroom-based products.”

Michelle says she and her husband were fans of the show Dragon’s Den and therefore had an understanding of what it would take to make a successful presentation. After making their pitch and providing edible samples, they actually had two of the four investors interested in fulfilling their wish for a $65,000 investment in exchange for a piece of the company. They chose Arlene Dickinson.

“We weren’t overly surprised at the offers, but beyond pleased,” says Michelle. “We are still working out the details with Arlene, but both parties are really enthusiastic to start working together.”

They requested the investment because the Whiteheads believe they are ready to take the next step in their business development.

“Every growing small business could use more capital, and in our case, we need huge cash flow at certain times of the year,” says Michelle. “We also need investment to help us mechanize. Our motivation for approaching the Dragons was to get more working capital, mentorship on scaling the business, and marketing expertise. We’ve never spent a dollar on advertising.”

Eric Whitehead has expert knowledge about all sorts of natural forest commodities, including many varieties of edible and non-cultivatable mushrooms. He is also a registered herbalist and an advisor to a group called The Rural Opportunities Network. He spends considerable time in the bush harvesting the raw products. One of their highest value products is morel mushrooms. Morels typically sprout in both natural forests and burns in later spring. It turns out there is a large worldwide demand for these tasty fungi.

“The world supply of morels has never met world demand,” says Michelle. “They are the most desired wild mushroom in the world, next to French truffles. I think it’s also just because they are rare, they look different, they taste different, and their texture is quite unique. People really respond to them.”

The company markets edible and select gourmet wild mushroom and mushroom-based products harvested from the forest throughout Western Canada and the Northwest Territories, and has been doing so for the past 13 years, with product in retail stores for the past six years.

Eric’s background is growing up in the Chilcotin region of rural British Columbia and also working in forestry where he discovered the wealth of wild products growing in the forest, and their harvesting and marketing potential by spending the time to learn where they are most likely to grow and planning harvesting trips accordingly. His interest in wild mushrooms took hold working with his father to harvest the highly valued pine mushroom, or matsutake, when it was selling for $100 per pound. Michelle also has a background growing up in a Prairie farm environment, where harvesting edible forest species like mushrooms and berries is a common practice. They began working at the business casually in 2007 and it has now grown into their primary income.

“We started selling to high end restaurants. Then we got into food and craft shows as a way to get people to start eating these foods in their own kitchens,” says Michelle. “There is a demand for it and people are interested. 2012 was our first year working at it full time.”

The company’s product line has expanded to include other wild mushrooms such as dried, smoked, and aged chanterelles, dried porcini, and a forest blend consisting of several edible mushroom varieties. They also sell mushroom-based products such as mushroom gravy, porcini risotto, wild mushroom soup, morel coconut rice, and chanterelle arroz.

Untamed Feast uses wood heat exclusively to dry its mushrooms, which they believe helps to differentiate their product from other freeze-dried or flash-dried mushrooms.

They sell their products both directly, through such venues as farmer’s markets, and online over the Internet. Michelle says their strategy is to try to build local markets for their products with the home cooks as well as with gourmet cooks. All of their products come with recipes and their website has cooking demonstrations and mushroom-hunting videos.

Agroforester with Alberta Agriculture and Rural Development Toso Bozic says this is exactly the type of business that both the provincial and federal governments are trying to encourage through the Growing Forward 2 program. It provides financial support on a cost-shared basis for individuals to help them investigate and launch potential business ventures related to value-added and specialty products from the forest and to help develop marketing strategies for these products.

“The opportunities could be as close as the mushrooms under your feet,” says Bozic. ❦