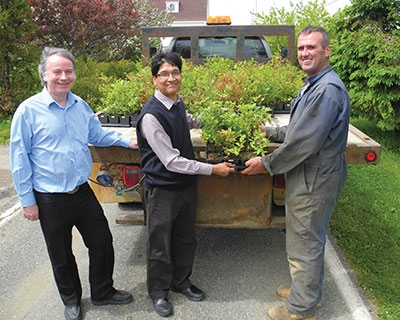 Blueberries are the most important and fastest-growing fruit crop in the country, with the highest farm gate value. They also contain the most antioxidants, especially the lowbush blueberries, among all common fruits. Because of their high nutrient value, they are used in an ever-increasing variety of foods, from cereals to baked goods to yogurt.

Blueberries are also Canada’s number 1 exported fruit. With the federal government’s recent announcement of a new trade agreement with the European Union – which will open up markets and decrease import taxes between the two trading blocs – growers can expect demand for blueberries to increase.

Even with all this acreage across the country, and export aside, demand for Canadian blueberries already exceeds what is being produced.

“Half-high blueberry plants are grown commercially in the United States, but they are not suited for the cooler Canadian climate,” he says. “We are creating mid-bush crosses between lowbush and half-high plants, which will have the best characteristics for commercial production in Canada.”

In the lab, and beyond
Debnath and his colleagues are using genetic fingerprinting to identify molecular markers in blueberry plants, which enables them to make direct comparisons of genes and their associated traits.

“Quick and accurate genotype identification is also needed for the crossbreeding and to ensure the breeding rights of new varieties are protected,” he says. “The time period required for developing blueberry cultivars is a challenging factor that can be reduced by three to four years through the use of in vitro and molecular techniques.”

The team is also taking advantage of significant progress that has been made in plant tissue culture research.

“Tissue-cultured blueberry plants have enhanced vegetative growth and rhizome yield, which may prove to be beneficial for rapid field establishment of plants with a corresponding earlier fruit production,” Debnath notes. “These techniques also speed up the cultivar creation process, from about 16 years to 12 years.”

Once initial cultivars are selected over the next two to three years, field testing will occur for seven to eight years.

When asked about the demand among growers for higher-yielding and hardier blueberry plants, Ontario Berry Growers Association executive director Kevin Schooley says: “I think blueberry plantings have been limited to southern Ontario historically and that’s because we need hardier varieties elsewhere in the province. If high-yielding varieties are produced, they would be welcome in most areas of the province.”

Schooley also says that if Debnath’s breeding efforts produce some earlier-season varieties, this would obviously provide growers with more opportunity for early marketing.

“We already have some earlier varieties,” he notes. “Most are marketed right from the farm and being able extend the season is great.”

Jason Smith, chair of the B.C. Blueberry Council, which represents 800 growers, says that since this research project is new to them, they require more information and time to determine if it has any relevance to the industry in British Columbia, where highbush blueberries are grown. However, Debnath says the high-yielding mid-bush blueberries being developed by him and his team should contribute significantly to the entire Canadian blueberry industry, including British Columbia. ❦