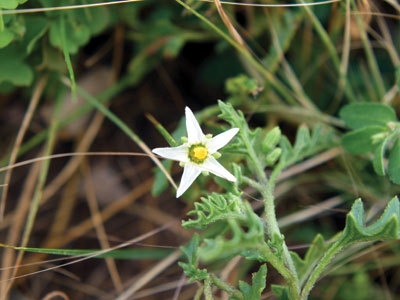 Hairy nightshade is a close relative of the potato plant and can be tough to control without damaging the crop.

The first six to eight weeks after planting your potatoes is the most vital period for weed control, says Dr. Doug Waterer. After that, the crop is big enough (with enough row closure) to look after itself.

The University of Saskatchewan plant sciences researcher notes that potatoes are generally “competent weed competitors.” Large seed piece potatoes in particular are fast emerging and the potatoes are well adapted to local growing conditions, he says. The wide row spacing makes for easy tillage and the robust, sprawling nature of the plants makes them capable of smothering weeds.

On the other hand, in the early weeks, that wide row spacing creates openings for weeds while field conditions are ideal for weed germination and growth, he says. The use of manures as fertilizer also encourages weed growth, adds Waterer.

He notes that weeds reduce potato yields and quality, interfere with field operations (such as inspection and rouging of seed fields) and increase production costs through restricted cropping and the necessity for herbicides.

Some weeds, including perennials such as flat grass and Canadian thistle, or fast-starting winter annuals, get a jump on the potato crop. Others, such as green foxtail and pigweed, grow in large numbers and can crowd out the crop. Others, such as hairy nightshade, are close relatives of the potato plant and are tough to control without damaging the crop, too.

“Every one per cent in weed growth results in a corresponding decrease in potato yield,” Waterer says.

But how should growers go about controlling weeds?

“There is no sense in feeding the weeds between the rows,” he says.

He also recommends planting high-quality potato seeds at a shallow depth and close together in warm, weed-free soil.

Waterer lists a number of herbicide options, including Eptam as a pre-planting herbicide.

“It should be applied before the crop is in the ground,” he notes, adding that Eptam is highly volatile and subject to substantial vapour loss if used improperly. It is best applied mechanically or through sprinkler water.

Pre-emergent herbicides that Waterer recommends for eliminating grasses and broadleaf weeds include Gramoxone, glyphosate or pelargonic acid. The products have a decent range but no residual activity, he notes, while emphasizing the need to make sure these herbicides don’t come into any contact with the crop.
“They can cause all kinds of damage,” he says.

A second pre-emergent herbicide he suggests is Flamer for controlling small grasses and broadleaf weeds, although he adds the product doesn’t work on perennials.  Flamer should also be kept clear of the crop.

Poast and Select are post-emergence selectives that control annual grasses, quack grasses and cereals, Waterer says. They kill emerged weeds up to six inches tall, and are slow acting, but have no residual activity.

Prism is a pre- or post-emergence selective that eliminates grasses and suppresses broadleaves, says Waterer, adding that the product can cause problems in canola planted late in the season.

Tillage is also an option for weed control, Waterer notes. To be effective, the equipment has to be well set up, maintained and operated at the proper speed and the weeds need to be small still. The soil should be moist. There should be no more than three tillage passes a year. And there should be no tillage once the crop reaches a height of eight inches.

Tillage costs less than using herbicides, Waterer notes, although herbicides can work faster and growers don’t run into the potential problem of compaction. Herbicides also require prior research to match the product to the weed.

“A combination of tillage and herbicides will do the best job of weed control,” Waterer says. “Combining the two reduces the number of tillage passes required and the volume of herbicide required.”