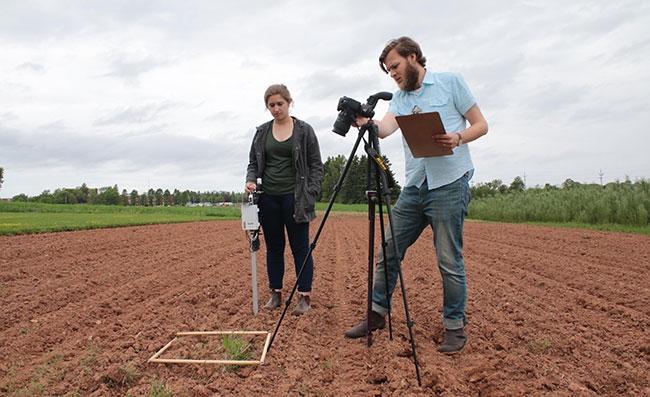 Weed scientist Andrew McKenzie-Gopsill with digital camera, sensor and controller mechanism that can be mounted on a sprayer and tractor to read crop plant locations. Photo by AAFC

Researchers are combining new digital tools, computer technologies and machine learning to bring cost-effective weed control solutions to the field. Although still in the early stages, this new high-tech solution is being designed as an advanced spot-spraying precision technology that will help farmers reduce input costs and add another management tool to their integrated management systems.

“We are developing a high-tech ground based sensor technology as another cost-effective precision agriculture tool for weed control in potatoes and other crops,” says Andrew McKenzie-Gopsill, weed scientist with Agriculture and Agri-Food Canada (AAFC) in Charlottetown, P.E.I. “There has been lots of work done with drones to develop prescription based maps that are fed into the control system of the sprayer to only spray where there are weeds based on the map. However, these systems take a lot of preprocessing power and a lot of work before actually going out to spray. Our goal is to remove the need for all of that pre-processing work and develop ground-based sensors that can recognize crop plants, bare soil patches and weeds, and then selectively apply herbicides to only the weeds in real time.”

This five-year project was initiated in 2017 and is still in the early stages of data collection, including many crop images at different stages – from early season through to canopy closure. McKenzie-Gopsill is collaborating with engineer Aitazaz Farooque at the University of Prince Edward Island (UPEI) to use digital cameras and computer algorithms to train sensors to identify crops.

“We are essentially using standard RGB digital images combined with algorithms and machine learning to train the machine to identify the characteristics of potato crop versus everything else for example,” McKenzie-Gopsill says. “We need to be able to balance processing speed while maintaining high enough accuracy so the machine can recognize a potato plant with three or four characteristics in the field.”

The system is being designed as simple and cost-effective as possible. The whole control system would be mounted on to an existing sprayer, including a small inexpensive camera mounted above the canopy, a mini computer to connect to the sprayer control system to control which nozzles are turned on or off.

“The idea is to provide a farmer with a blueprint of what they need to retrofit their existing sprayer to add this sensor technology,” McKenzie-Gopsill says. “We are estimating the costs at around $15,000 to $20,000 for the one-time retrofit. With expected reductions in input costs and no pre-processing costs, the payback should be fairly fast. Some calculations completed on spot spraying technologies show that input costs can be reduced by as much as 80 per cent, depending on weed pressure. Lower weed pressures result in higher savings.”

In the first year of the project, data collection focused on soybean crop plants. In 2018, McKenzie-Gopsill will be moving to collecting data on potato plants. The objectives are to be able to train the machines to accurately identify a potato plant based on characteristics that would be similar across other potato growing areas in Canada. And ultimately, the sensors would be trained to identify a range of crops that growers would have in their rotations. By focusing on training the sensor to accurately identify specific crops and bare ground and control everything else, it doesn’t need to know all of the different weed spectrums in different fields.

“The data collection remains our main priority right now, along with training the computer alogrithms,” McKenzie-Gopsill adds. “There are challenges with getting the sensor to recognize the key crop characteristics under different light conditions or time of day or wind. Therefore, we need to collect a wide range of digital crop plant images under different conditions so the system can accurately recognize the crop plant under any typical field spraying conditions a grower might have. Once we complete the data collection over the next few years, we will field test the algorithms and the complete system, and once its fully operational, it will be an easy system. Once installed, growers will be able to go into their field to spray, flick a switch and they are ready to go. When available, this technology will be another cost-effective tool to help farmers manage weeds and reduce input costs, as well as reduce the potential risk of herbicide resistance.”