Two research trials are currently underway in Manitoba to trial sweet potatoes as a possible rotation crop with traditional potatoes. 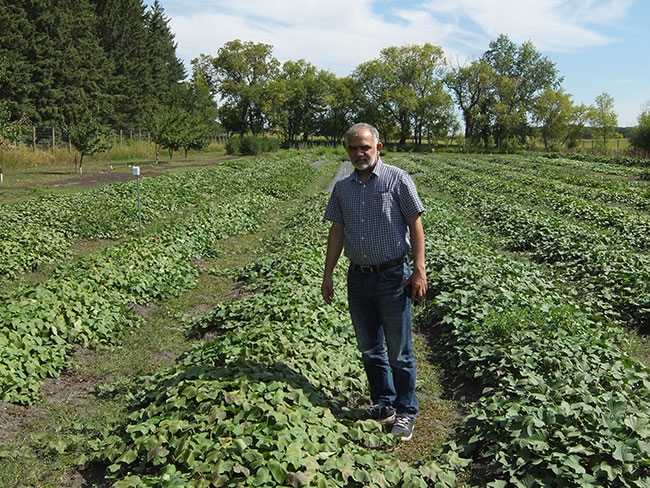 Efforts to develop sweet potatoes into a commercial crop for Manitoba farmers are showing good progress at two locations in the province.

Both Dr. Sajjad Rao at Assiniboine Community College in Brandon and Tracy Shinners-Carnelley at Peak of the Market in Winnipeg are conducting research trials on the popular root vegetable and hoping it can have a place next to potato production.

“We have the second largest potato production in the country here in Manitoba,” Rao points out. “Potatoes are a similar technology, as a ground crop. If a grower has knowledge on how to grow potatoes, he might be able to adapt that knowledge.”

Both Rao and Shinners-Carnelley are working with virus free slips from Vineland Research and Innovation Centre in Ontario.

“We have a close association with Vineland and it is working well,” says Shinners-Carnelley.

Vineland is breeding shorter-season varieties that they hope will mature earlier that the current 100-day standard for American stalwarts, like Covington and Orleans.

But first they had to see if this crop, more associated with U.S. Gulf Coast states, would grow at all in Manitoba.

“Some growers had dabbled in sweet potatoes many years ago and interest remains to be able to do it,” says Shinners-Carnelley. “But the feedback has always been we need a better variety more suited to our climate.”

Peak of the Market has their own research site at Winkler, Man., as well as a number of growers conducting trials.

“We have had tremendous success in what we have done so far,” says Shinners-Carnelley. “I’m quite optimistic.”

Rao says that they grow well in his test plots, too.  Even the Covington and Orleans plantings that he uses as a benchmark are successful, in spite of the vagaries of a Manitoba fall.

“We started our 2016 harvest at the end of September but we had to stop for rain and frost and then some snow and pick up again two weeks later,” recalls Rao. “I was digging and crossing my fingers at the same time.”

But despite the fact that the plants had died back with the first hint of frost, the condition of the roots confirmed what his temperature probes had told him.

“The soil provided enough insulation for the root, that harvest can be delayed 10 to 15 days and the roots are still in good condition.”

Sweet potatoes develop most of their root size just before harvest. Rao says he hopes his temperature data will help determine the best harvest window.

“That’s one of the keys with sweet potatoes,” he explains. “You want to leave them as long as you can because they develop late in the growing cycle, but they are also tender.”

Rao’s results this fall from a second year of replicated trials show that the Vineland varieties he is working with are producing a 10 per cent greater yield than the control plantings with “good quality and shape.” He is also working to compare bare ground plantings with the benefits of raised beds, together with black plastic mulch with drip tape irrigation under that mulch.

“We expect we will see an improvement in root zone temperature which should help with maturing,” says Rao. “We know the plastic helps to control weeds, keeps the drip irrigation placed on target and should conserve water as well.”

Shinners-Carnelley says her growers are putting in more labour to get the project off the ground.

“Now that we know they will survive, we will start to work out the technical details and the agronomy,” she explains. “There is no point in looking at planting, harvesting or curing systems or marketing if we don’t have a product. So that will be the focus of our work going forward.”

Shinners-Carnelley says that there is not a cross over between diseases and pests that affect sweet potatoes and traditional potatoes. Rao says the distance from other sweet potato growing areas is an advantage and emphasizes the need for the plants to get a good start.

“Virus free slips are the best way to protect the plants,” he maintains. “So far, it’s good for pests and diseases, particularly with the roots. I haven’t seen any grubs or root borer.”

Sweet potatoes may be able to play an important role as a rotation for potato farmers, adds Rao, noting the genus of sweet potato, a root crop, is completely different from the tubers of potatoes.

Often mislabeled as “yams,” the popular and nutritious vegetable appears to have strong market potential. There are two target markets, Rao points out.

“One stream is the table market and the other for the processors,” he says.

Manitoba potato processor McCain Foods currently sources its sweet potatoes from the U.S. as does Peak of the Market. Both researchers confirm a consumer preference for “local” product.

“I think we are ready for semi commercial production,” says Rao. “A number of market gardeners who are growing and selling specialty crops have been talking to me about the potential.”

He thinks that direct marketing will give growers the best chance to absorb the higher costs of production at this stage. He adds that slips are the most expensive part of growing the crop.

“We don’t have an economic model worked out yet,” he says. “One of the best ways is to give that plant to the famer and get him to work out the economic model.”

Villiam Zvalo from Vineland reports that a short season variety known as VSP445 is on track to be released in early 2019. He says three commercial propagators have been engaged to propagate slips of this variety.

“We are working diligently to fine tune a slip production system to ensure that high quality planting material is available for Canadian growers when this short season variety is launched,” says Zvalo.

“It will come,” says Rao. “There didn’t used to be either corn or beans in Manitoba, but breeders have developed varieties that are suitable to this climate and now you see them a lot. Once this crop is in, there will be more money invested in research so definitely there will be a day that it becomes a commercial crop.”

“I had a root from the store sitting in the corner of my pantry and it had developed some really healthy sprouts,” Grenkow says from her home in Winnipeg. “When I researched on-line, it looked liked I wouldn’t have any success, but the slips were so strong, I put them in the ground anyway.”

Grenkow has turned that first chance crop into a bustling slip supply business, selling direct to customers as well as select Winnipeg garden centers. Her seed stock of Convington roots comes from the U.S., and she aims to produce 5,000 to 8,000 slips for spring 2018.

The largest root from her home garden weighed in at more than one pound, but she says consumers like the smaller individual gourmet “table size.”
“The skin is more tender, they don’t have to peel them,” she says.