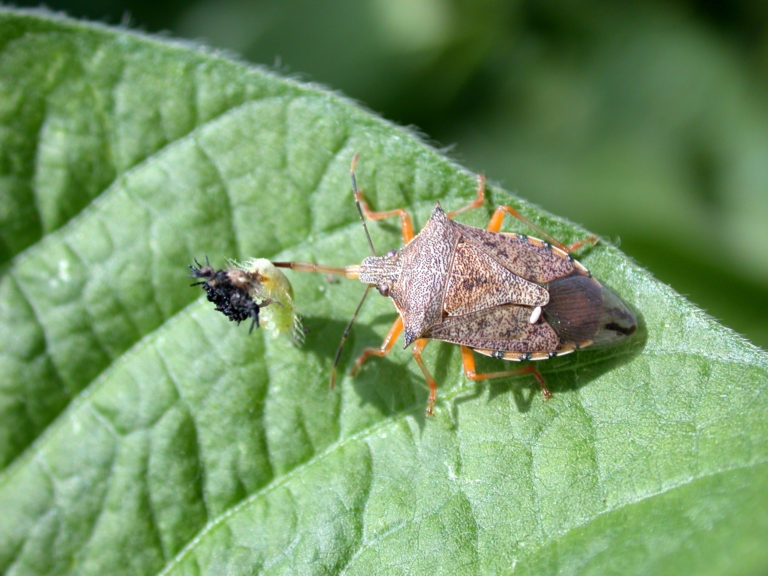 Laura Ingwell, a postdoctoral researcher in the department of entomology, studies pest-control methods in protected agricultural systems. She’s interested in determining best practices for fruit and vegetable growers using high tunnels, which can extend the growing season. Her previous research has shown that high tunnels can increase not only crop yield, but also damaging pests.

In research published in the journal Biological Control, Ingwell tested augmentative biological control, which employs predatory insects that prey on crop pests. Producers supplement natural enemies in the environment with commercially available predators. The study sought to determine the best way to retain the beneficial insects in the high tunnels, reducing their dispersal to neighboring habitats.

Ingwell used small-opening, 0.18 mm2 screens on a subset of tunnels to test a variety of predatory insects, including lady beetles, minute pirate bugs, spined soldier bugs and green lacewings on tomatoes and cucumbers. Three times in the space of a week, researchers collected and counted the predators, but few had survived. Meanwhile, crop pests thrived.

“We had a really low recapture rate of all the predators that we used — less than 10 per cent,” Ingwell said. “The screens did not work, which really surprised us.”

Ingwell said the heat created by the screens was the likely culprit. It might have driven some to escape through cracks and holes in screens that are inevitable with high tunnels. The heat, which reached average maximum temperatures of 98°F, might have also killed many of the predators. The physical barrier prevented other predators from naturally colonizing in these tunnels.

“Airflow was significantly reduced by the screens, which trapped so much heat that it changed the environment inside the tunnels making it inhospitable for the predators we released,” Ingwell said. “The mites and aphids, which damage crops, seem to be less affected by the heat stress. They may be able to better handle those temperatures, or they may reproduce so quickly that their populations were better able to survive.”

In another set of tunnels, flowers and chemicals meant to attract predatory insects were used. The flowers provide alternative food for the predators when prey populations are low and the chemicals, called herbivore-induced plant volatiles, attract predators because they mimic the scents created when pest insects damage crops, signaling to predators that a meal is nearby. In those tunnels, twice as many minute pirate bugs were retained.

Ingwell suggests growers consider using flower varieties that can be sold commercially so as not to waste space that might be used for crops. For this study, Benary’s giant golden yellow zinnia and fireworks gomphrena were effective.

The take-away message from Ingwell is that using beneficial insects can work in some scenarios, but getting the right balance is tricky.

“In general, augmentative biocontrol may not be worth the investment because in most cases, those insects aren’t staying or surviving long enough to have an effect,” Ingwell said. “Unless you alter those environments to keep the predators there, this may not be a cost-effective method for controlling crop pests.”

Ingwell is continuing to test screen sizes and different predator pests to improve pest control in high tunnels. The U.S. Department of Agriculture National Institute of Food and Agriculture funded this study.