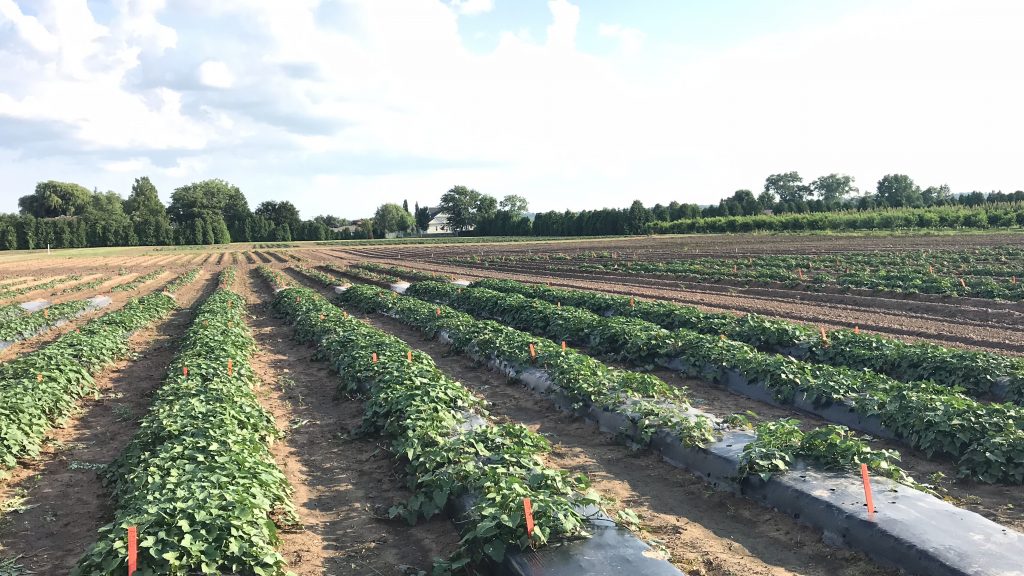 Some relationships can be complicated. Take the one between sweet potato crops and soil nitrogen, for example.

Too little nitrogen and sweet potato plants don’t grow well and have low yields. Too much nitrogen, however, boosts the growth of leaves and branches at the expense of storage roots. That also leads to low yields.

Fernandes is the lead author of a new study that determined how much nitrogen is needed to maximize yields from sweet potato crops in Brazil.

Sweet potato plants grown in plots previously used to grow legume cover crops needed 35 per cent less nitrogen fertilizer. Growing sweet potatoes after a cereal cover crop, however, was no different than growing them in a plot that had previously just had weeds.

“We show that growing legume cover crops, and incorporating them into the soil as they flower, is a simple technique that can reduce how much mineral nitrogen needs to be applied for sweet potato farming,” says Fernandes.

Cover crops are often grown cyclically with economic or cash crops. They may be incorporated into the soil as green manure. They may also be left on the surface as living mulches.

Fernandes and colleagues used a study site in southeastern Brazil. The site is a good match for the tropical conditions and sandy soil typical of several areas where sweet potato is grown in Brazil.

In different plots, the researchers grew either one of two legume crops, a cereal crop, or allowed weeds to grow from seeds already present in the soil. When the legume and cereal cover crops were flowering, they were terminated. The plants were incorporated into the soil.

Subsequently, the researchers planted sweet potato in the plots. They tested how much nitrogen was needed to maximize yields.

“We show that there is no reason to use a cereal cover crop prior to sweet potato cultivation,” says Fernandes.

Currently, recommendations of how much nitrogen fertilizer to use with sweet potato crops do not consider the history of cultivation in the area. That can result in farmers using more or less fertilizer than needed.

“We now better understand how much nitrogen is needed to maximize sweet potato yields in tropical regions,” says Fernandes. “This will help manage the application of mineral nitrogen fertilizers during sweet potato cultivation.”

In addition to maximizing yields, using less fertilizer also reduces costs for farmers. That’s especially important in Brazil. Much of the sweet potato crop is grown on family farms with low technology use.