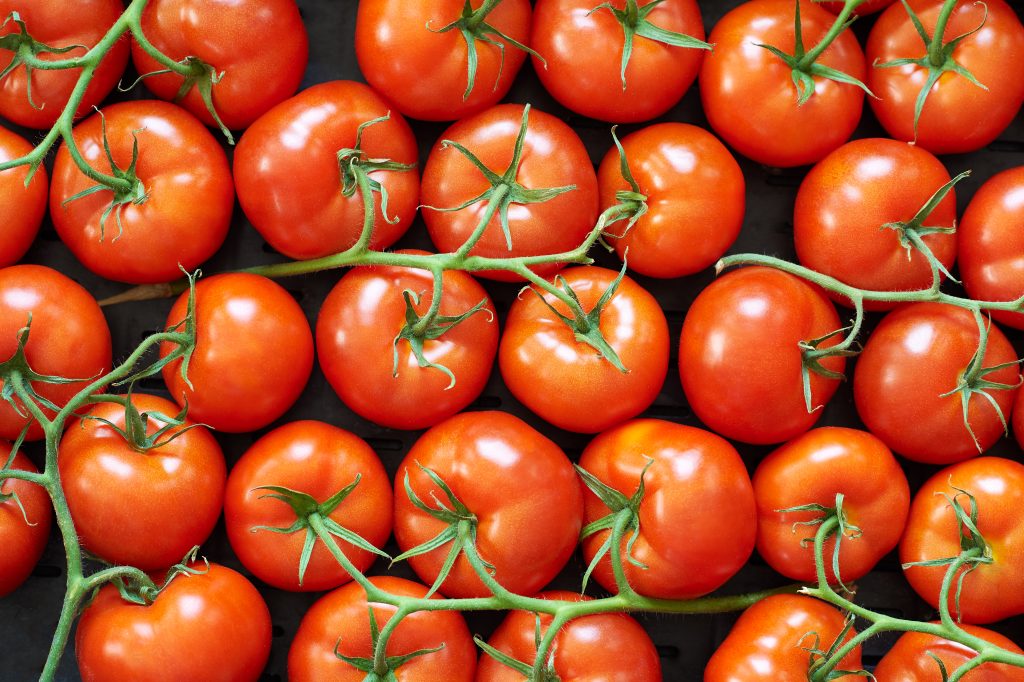 It’s common to hear celebrity chefs recommending consumers avoid grocery store tomatoes unless they’re canned. Unless tomatoes are local – preferably home-grown – the assumption is that they’re long-lasting but flavourless, virtually scentless and maybe even mealy. In other words, a waste of money.

A team of tomato researchers and breeders at Vineland Research and Innovation Centre aims to change all that.

“Focuses in breeding have been around yield, disease resistance and shelf-life–tomatoes that can survive on the vine once you’ve harvested them, and that get to consumers not overripe,” says David Liscombe. “A lot of hard work went into those traits, getting tomatoes that can feed the masses, but now we’re in a new age for most horticultural products where consumers are looking for more.

“That was the catalyst for the project.”

Liscombe is a research scientist in biochemistry at Vineland. Since 2013, he’s helmed a project that aims to seriously up the ante for commercial tomato flavour. Vineland wanted to differentiate Canadian tomatoes, and Ontario tomatoes, from tomatoes coming through other markets – via what he calls “consumer preferred flavour.”

The first step was to put together a multidisciplinary team that included a consumer insights team and a sensory advisory panel – a team of trained food tasters who could provide a lexicon for qualities that result in “consumer-liking.” 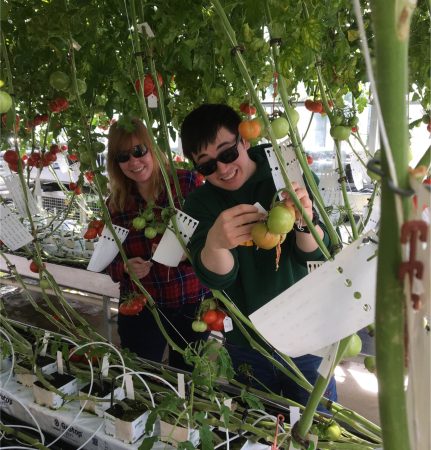 The biochemistry group, led by Liscombe, started by tasting a large number of tomatoes and analysing their chemistry. There are well over 40 aroma volatiles that influence taste that could be detected, he explains, but only a subset of these influence consumers’ perception of the tomatoes; and only a handful of the latter influence liking.

“There was a great [range] in liking of commercial, on-the-vine tomatoes; consumers didn’t like some at all, and some scored [well],” he says. “That initial screen of the tomato diversity available and what people are looking for set the stage for how we’d proceed.”

Liscombe says it was a gift to work with Vineland’s trained sensory panel, which was able to put language to hard-to-describe traits. One example of a trait that consumers identified as liking: “tomato stem,” that scent that hits the nose first when you walk into a tomato greenhouse. Another was “smokiness.” The latter, Liscombe says, is corroborated by the scientific literature – other panels in other countries have identified the same quality as desirable in a fresh tomato.

The sensory advisory panel narrowed down the list of traits to about 20 they could all agree on. But how did those 20 traits map onto the 40 aroma volatiles that Liscombe’s team was analysing in the biochemistry lab?

“Part of that process was developing what we call the genetic toolbox for tomato flavour differentiation,” he explains. “How do we keep those desirable traits like shelf life and disease resistance but also introduce different, more enhanced flavour? Part of that was looking at what was already known about how flavour chemistry is controlled in tomatoes.”

By 2013, for example, several genes responsible for important aspects of aroma chemistry were already known, such as 2-phenylethanol. “If you’re familiar with a fragrant rose, a landscape rose that you can smell, that’s a pure 2-phenylethanol, a flowery aroma that’s an important part of the cocktail that tomatoes provide,” Liscombe says.

“Those were things we could select for in breeding using standard molecular breeding approaches, but then there were a lot of other genes and chemicals where, after decades of work by many groups, people still didn’t know how some of these chemicals are made in tomatoes.”

The team used Platform Genetics’ Deep Variant Scanning technology (Platform Genetics is a spin-off company of Vineland) to find populations of tomatoes that had variant versions of a few key flavour genes. Because of their genetic variation, these tomatoes could express unusual aroma profiles.

The tomatoes were then brought to the sensory panel, which was asked if they could differentiate them from regular tomatoes. If they passed the test, they went to a consumer panel next. If consumers could detect enough difference in the aroma chemistry, Liscombe’s team knew they’d landed on the right variation and the right genes.

They also found that it was easy to wreck a tomato with the wrong genes. “There are lots of ways to make a tomato taste worse,” Liscombe says.

But by combining the genomics from metabolite profiling with consumer and sensory panel work, they were also able to take some complex chemistry and “turn it into real fruit that you will be able to purchase at some point soon.”

Currently, three tomatoes from this program have been in grower trials since 2019, but more hybrids are added every year. Theoretically, each new hybrid will be better than the last.

The cherry tomato on the cake is new research published with Liscombe’s collaborators at the University of Laval in Quebec and the University of Florida, which identifies a gene that’s responsible for many of the most important aroma volatiles. It solves a puzzle researchers have tried to crack for decades.

“Cysteine combines with other aroma chemicals to make super-stinky volatiles, but this gene that encodes this enzyme then takes this super-stinky combination of cysteine and aroma volatiles and turns it into more pleasant-smelling volatiles – one of them being this unique chemical called 2-isobutylthiazole, which smells like tomato vines,” Liscombe says.

It’s a major discovery that will help researchers speed breeding efforts. But there are many more mysteries in breeding flavourful tomatoes, and he says it takes the work of multinational research groups to solve them.

The results won’t just benefit the tomato industry; they’ll also have applications in apple breeding. “I think we have a really good team and pipeline here to deliver some new and exciting products for consumers,” Liscombe says.

“I look forward to tasting them!”