Bigger may not be better for sweet cherry trees. 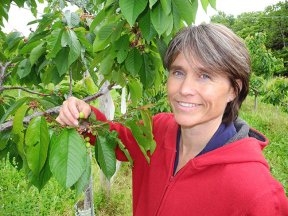 “One of the largest costs to a producer is getting the crop harvested from the trees,” says Dr. Suzanne Blatt, a scientist at Agriculture and Agri-Food Canada (AAFC) in Kentville, Nova Scotia. “Climbing up and down ladders takes time and care to ensure the workers are safe and the trees are not damaged in the harvesting process. A shorter tree with fruit that is easily accessible from the ground means faster harvest, better tree care and less risks for harvesters.”

Blatt (at AAFC in Kentville since 2011) and Dr. Denise Neilsen (at AAFC in Summerland, B.C., since 1992) are part of an international team studying fruit tree growth, development and production. Instead of conventional cherry trees, up to four metres in height in B.C. and seven metres high in Nova Scotia, the team is looking at production of trees under three metres high that can be re-shaped on a trellis system into easy-to-pick bushes or trees with thin upright branches. Each planting in the international study was produced at the same nursery and distributed to participating sites in Canada, the U.S. and Mexico in 2010. Blatt says trees in B.C., Nova Scotia and Michigan began producing fruit in 2012.

The cherry tree variety scion being experimented on is Skeena, which is late-maturing compared with traditional cherry cultivars such as Bing. Skeena was chosen, Neilsen says, because it is a popular cultivar worldwide, but notes that other cultivars grown at AAFC Summerland would have been suitable, such as early-fruiting Santina and Cristalina, or Lapins and Sweetheart, which mature in mid-late July in the Summerland area. Sentennial and Staccato (mature late July to mid-August in that region) were another option, as well as Suite Note (a newly-released cultivar that matures in between these groups, around the time of Bing).

“The rootstocks all have different levels of vigor,” Blatt explains. “Gisela 3 is the least vigorous, Gisela 5 is moderate and Gisela 6 is the most vigorous.”

With UFO, the main stem is planted at about a 45-degree angle so that it’s horizontal and about 30 cm above the ground. It must be trained to a trellis for support.

“This orientation of the main stem encourages the tree to produce ‘side’ branches that shoot straight into the air, which creates a wall of fruit-bearing limbs,” says Blatt. “The ‘side’ shoots are of similar size and length to the main stem, so there’s easy access to the cherries and also a very thin canopy which can allow for better penetration of spray products.”

The UFO was developed by Dr. Matt Whiting at Washington State University. In a Pacific Northwest Extension Publication called ‘Cherry Training Systems,’ Whiting and his colleagues L. Long, G. Lang, and S. Musacchi state: “Establishing the UFO system is straightforward with little to no pruning required at planting…Unheaded and unbranched (whip) nursery trees are recommended.”

So far, Blatt has found that the small KPG bush or re-shaped UFO trellised trees don’t produce as many cherries as conventional trees in Nova Scotia. However, she says the cost savings with harvest may make up the difference, with the price of the fruit in any given year being a major factor.

In British Columbia, the story has been very different. Neilsen found that after the first five years, the UFO and KGB systems were most productive, averaging about 9 kg of cherries per tree compared to conventional TSA at about 8 kg.

“Gisela 5 and Gisela 6 rootstocks have averaged about 9kg/tree and Gisela 3 about 7.5 kg/tree,” she says. “Gisela 3 has the potential for higher density planting than Gisela 5 and 6, which could offset the lower production per tree.”

All training systems and rootstocks produced large, high-quality fruit up to 14 g (33mm) in size. However, Neilsen says the size can decrease if the number of fruit per tree becomes too high. (In Nova Scotia, the fruit is smaller, averaging 7.5 to 8 g and 24 to 25 mm, but with what Blatt describes as “good colour and lovely taste.”) Neilsen does not have any data about harvesting time comparisons for these tree systems.

Neilsen was not really surprised at the results, as she says “these systems have been proven in other regions,” for example Bing with UFO in the U.S., and Lapins, Skeena and Sweetheart with KGB in Australia.

“Climate and soil type would be the two biggest factors,” Blatt notes. “We are wetter and less warm than the Okanagan. While we do have higher instances of disease in NS compared with BC, these haven’t had as much influence on the results as the climate.”

Indeed, Blatt says cherries in Nova Scotia are a small industry largely because of the climate.

“For that reason, more vigorous rootstocks tend to fare better simply because they are hearty and able to withstand the varying conditions,” she explains. “The trees took a while to get established and start producing, but are performing quite well.”

Measurements on these trees will continue to be made until at least 2020. At this point, Neilsen is comfortable saying that KBG and UFO systems are both feasible in Canada. They may do well in Ontario, because she says they are “doing very well in Michigan, which has similar climate to Ontario.”