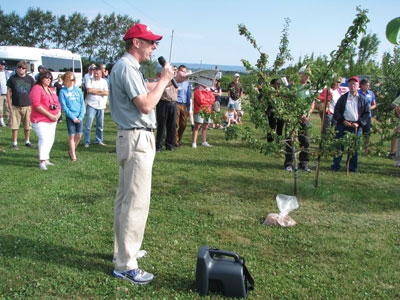 The AFHRC test plots – as part of the NC-140 trial – has planted 31 different Honeycrisp rootstocks from New Your State, England, France, Germany and Russia.

There are also NC-140 test plots in British Columbia, 12 U.S. states and Mexico.

Dr. Gordon Braun, another AAFC tree fruit researcher, is overseeing an organic Honeycrip trial in a 10-row plot, planted with 10 trees in each row four years ago.

After encountering a problem with inhibited growth on the trials site, he placed three inches of composted hog manure on three rows, composting which greatly improved the growth and yield of those three rows, “producing superb apples last year,” said Braun.

Bill Craig, a tree fruit specialist with Perennia, the provincial consulting and extension agency, remarked, “It took a while to get the nitrogen level required in the plot.”

Dr. Sean Myles, with the Dalhousie University agricultural faculty, has genetic diversity research underway in the AFHRC tree nursery. A large number of cultivars, 1,300 grafted onto

M9 rootstock, were introduced into the nursery in 2012. His research will look at breeding disease resistance into cultivars.
Dr. Myles said it is very time consuming and expensive to breed a new cultivar. So, tracing its DNA and establishing its genomics, can assist prediction of what a new cultivar could look like.

Genetic selection for future cultivars takes place in the nursery’s greenhouse, followed by screening at the seed stage, he said.

Because there is a bottleneck in the ability to measure cultivar traits, Dr. Myles plans to reduce the time and cost of collecting cultivar data.

At an orchard outside of Kentville, NSFGA research technician Doug Nichols is doing research trials with ABA (abscisic acid) and MaxCel on Honeycrisp, grafted to several different rootstocks, (11, 106, CG30 and M26) in a block planted in 2000. He is examining the interaction of Honeycrisp with various rootstocks as it affects fruit storage.

Nichols told NSFGA orchard tour participants ABA is widely used in the U.S. to add colour to grapes. In 2011, he applied ABA to the trial block 30 days after full bloom and found it not only thinned the fruit on the trees, but it also caused their leaves to yellow and drop.

To reverse that effect, he added MaxCel at 300 ppm to see if it would thin with leaf drop. In 2012, however, he found smaller apples in the ABA-thinned blocks.

“The take-home message on ABA is be careful,” said Nichols. “You might not get the results you want.”

There might be opportunities for growers to use ABA; but it needs more research, he added.

“We didn’t get results any grower would want.”

Dr. John DeLong, an AAFC crop physiologist, also demonstrated a DA meter, a non-destructive device that can measure the chlorophyll content of fruit and correlate that reading to fruit maturity on the tree. The DA meter, said Dr. DeLong, enables growers to determine when to begin harvest. The intake maturity of Honeycrisp apples can also be determined to ensure their proper storage and marketing.

“You can tell what fruit should go into long-term storage,” he said.

The DA meter can also be used on other high value cultivars.

“It is a real world technique you will be hearing a lot about,” said Dr. DeLong.

Back at the AFHRC research plots, the third year of research is nearing completion on the NC-140 sweet cherry rootstock and production systems trials. Some of the trees had up to one kilogram of cherries that were marketable, reported Dr. Suzanne Blatt.

“This is the first year we had a harvest,” she explained.

“It had the largest and heaviest fruit,” she said.

The two other rootstocks being tested are Gisela 5 and Gisela 6. Researchers are also examining three different production systems: Kym Green Bush, Upright Fruiting Offshoots and Tall Spindle Axle. To date, KGB has had inconclusive results, explained Dr. Blatt, adding that UFO has achieved mediocre results and, although TSA leads, it remains to be seen if it will continue as the leading production system in the trial plot.

Bill Craig, who conducted the NSFGA tour, said Mazzard is the leading rootstock in Nova Scotia where growing sweet cherries continues to be a challenge as the fruit is prone to cracking. ❦