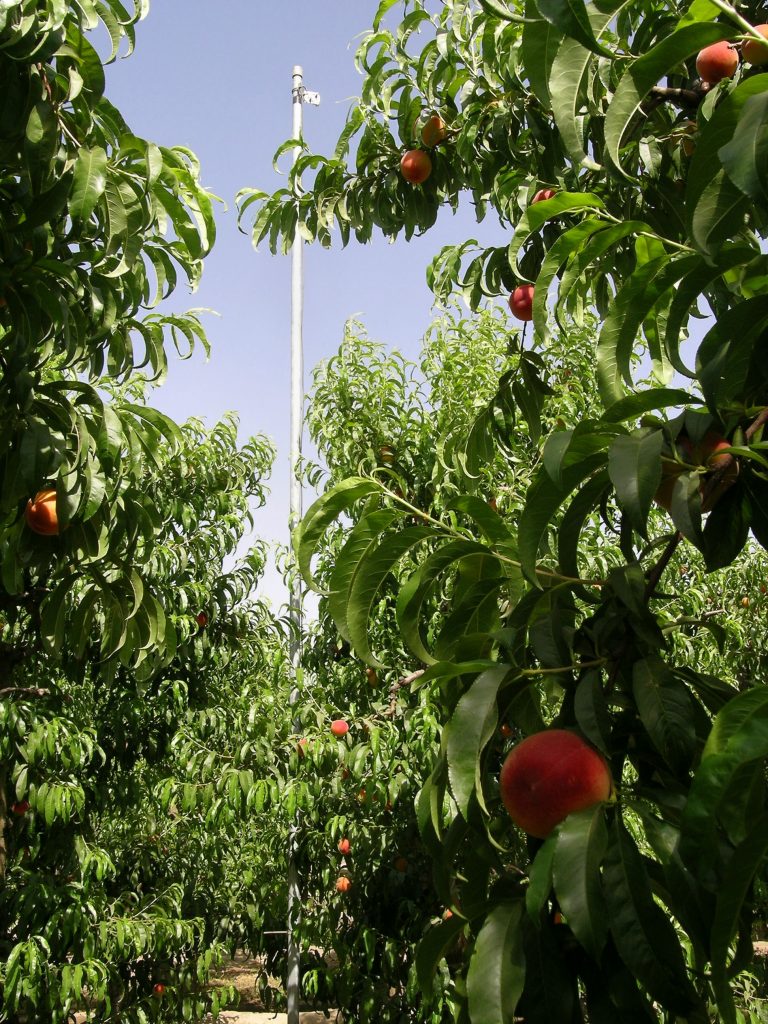 Agricultural Research Service (ARS) scientist James E. Ayars at the San Joaquin Valley Agricultural Sciences Center in Parlier, Calif., has found a way to reduce the amount of water given post-harvest to early-season peaches so that the reduction has a minimal effect on yield and fruit quality.

The valley has about 25,000 acres of peach orchards that must be irrigated throughout the summer. Early-season peaches are normally harvested in May, but require most of their water from June through September, a time when temperatures and demands for water are highest. Snow packs in the Sierra Nevada have traditionally been a sufficient water source for growers, but earlier snowmelts have made water more precious with each summer. Wells that supply the valley have had to reach deeper to meet increasing demands.

Ayars and ARS scientist Dong Wang, also based at Parlier, irrigated a four-acre plot of early-season peach trees from March to the May harvest. From June to September, they gave the trees either 25 per cent of the amount of water they’d normally receive, 50 per cent of the normal amount, or 100 per cent. The scientists measured soil water content once a week to be sure that even with periodic rainfall, trees were given appropriate deficit-irrigation treatments. They also used three types of irrigation systems: microspray, subsurface drip irrigation, and furrow irrigation, in which water is distributed in shallow canal-like rows near the trees. Defective fruit were counted and removed after each harvest.

The results showed that reducing post-harvest irrigation levels to 25 per cent of the normal amount had negative effects on yield and fruit quality, but that giving 50 per cent less water than normal had minimal effects on the following year’s quality and yield. The subsurface drip irrigation systems tended to have the lowest yields within a given year, but differences were generally not statistically significant. The researchers also found that trees needed less pruning and maintenance because the deficit irrigation slowed plant growth.

The results of this study have been submitted to the scientific journal HortScience for publication.