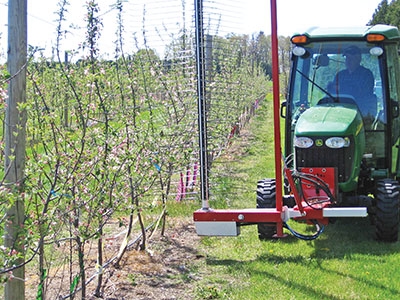 The Ontario peach industry produces an annual farm gate value of $27 million (Statistics Canada, 2012), but crop load management remains critical for profitability, due to over-cropping. Hand thinning of peaches is common 40 to 50 days after full bloom in order to increase fruit size, but this process is labour intensive and expensive. A two-year study was conducted beginning in 2010 to evaluate mechanical blossom thinning (MBT) of peaches using a string-thinning device, and to determine the effect on crop load, yield, and fruit quality.

After June drop, trees were hand thinned and time required to thin was recorded. This was then extrapolated to hours per hectare (h·ha-1) based on orchard tree density. At harvest, the total number and weight of fruit harvested per tree was recorded, as well as the number and weight of naturally dropped fruit. Fruit firmness and soluble solids concentration were measured on a subsample of unblemished fruit. Fruit were also graded, and due to a price incentive for growers, are presented as the percentage of fruit >70 mm.

Results
In both years the two methods of thinning were similarly efficacious in removing blossoms (Table 1). In 2010, fruit set decreased linearly with increasing MBT and HBT, while in 2011, fruit set for the hand-thinned control treatment was higher than all other treatments. In 2010, only the HBT high treatment required significantly less time to hand thin at “June drop” compared to all other treatments (Table 2). In 2011 the control and HBT low treatments required the greatest amount of time for hand thinning, while the HBT high treatment again required less hand thinning.

Discussion
Approximately 50 per cent of peach blossoms need to be removed to achieve a commercial crop (Marini and Reighard, 2008). Flower removal rates in this study were comparable with other work (Baugher et al. 2010b; Schupp et al. (2008), but in some cases were higher than other reports (Baugher et al., 2010a), perhaps due to the suitability of the orchard for mechanical blossom thinning. Growers should consider their orchard management before using a mechanical thinning device, as other research has found that results can be variable if the canopy is poorly suited for thinning with the device described here (Miller et al., 2011; Schupp et al., 2008).

In this experiment, there was no significant treatment effect on marketable yield, indicating a compensatory effect of reduced fruit number by increased fruit weight among thinned trees. Other studies have observed improvements in marketable yield (Baugher et al., 2009), while others have proved variable (Miller et al., 2011). With thinning it is important to improve fruit size, but not forfeit economic yield (Marini and Reighard, 2008). In this study there also were no significant treatment effects on fruit firmness or soluble solids concentration (data not shown), which may have been due to the fact that peaches were harvested based on maturity.

Prior to the widespread adoption of mechanical blossom thinning there are several issues that must be addressed. Most importantly, trees must be managed properly to provide adequate access of strings to the tree canopy (Marini and Reighard, 2008). In less suitable orchards compared to the one used in this study, follow-up thinning may be necessary to mitigate inconsistent thinning (Baugher et al., 1991). Another important concern for growers is the risk of frost (Baugher et al., 1991), which could further decrease crop load. One final area of interest that warrants more investigation in Ontario is the timing of mechanical blossom thinning (Costa and Vizzotto, 2000; Schupp et al., 2008).

Overall, mechanical blossom thinning might be approached as a two-part strategy to reduce the amount of hand thinning needed after June drop. Since concern exists of over-thinning due to the higher probability of frost at or shortly following bloom, partial removal of the crop load could be achieved by mechanical blossom thinning with the intention of follow-up hand thinning to reach the targeted final crop load after set has been determined (Myers et al., 2002).

Conclusions
Peach trees can overset, and to solve this problem growers will adjust crop load by hand, the universal thinning strategy (Myers et al., 2002) and by chemical means (Coneva and Cline, 2006; Greene et al., 2001; Osborne et al., 2006), although results have been inconsistent (Marini and Reighard, 2008). In this article we propose mechanical blossom thinning as an alternative, but more research is needed in order to fully understand its effects in Ontario orchards and in order to adequately advise growers (Marini and Reighard, 2008).

We gratefully acknowledge George Lepp for the use of his orchard, as well as the technical assistance of Debbie Norton, University of Guelph.

Kendra Sauerteig and Dr. John A. Cline are with the University of Guelph.