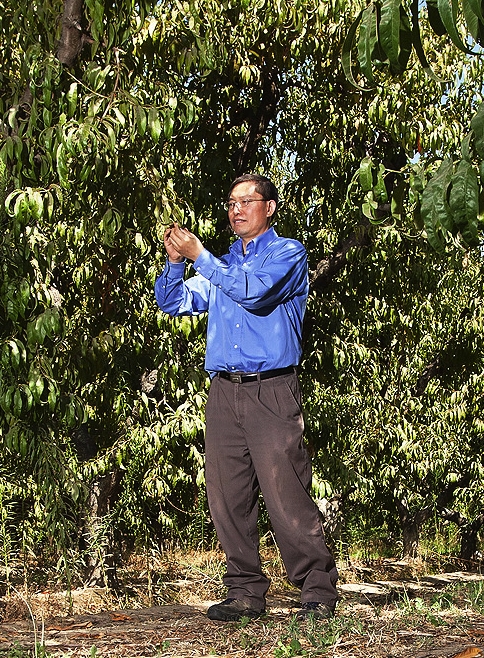 ARS scientist Dong Wang is developing a way for peach growers in the San Joaquin Valley, Calif., to use infrared sensors and thermal technology to know precisely when their trees need irrigating. USDA-ARS

December 13, 2012 – Peach growers in may soon have better tools for saving water because of work by U.S. Department of Agriculture (USDA) scientists in Parlier, CA.

Irrigation is the primary source of water for agriculture in California’s San Joaquin Valley during the summer, and wells have been forced to reach deeper to bring up enough water to meet increasing demands. Peaches also require much of their water from June through September, when temperatures and demands for water are at their highest.

They also measured crop yields and assessed the quality of the fruit to compare the output of trees grown under deficit irrigation with trees grown under normal conditions. Deficit irrigation has been used to produce some varieties of grapes and has been studied for its potential in fruit tree and row crop production. But it has yet to be widely adopted, in part because growers need better tools to strike a balance between saving water and keeping crops viable and healthy, according to Wang.

They used the sensors to measure temperatures in the tree canopies, and calculated a “crop water stress index” based on the differences between tree canopy temperatures and the surrounding air temperatures. Higher index numbers indicated more stressed trees.

For comparison purposes, the researchers placed leaves from stressed and non-stressed trees in a pressure chamber and measured the pressure required to squeeze water out of them. When the trees are water-stressed, it takes more pressure to squeeze moisture from them.

The results, published in Agricultural Water Management, show that the pressure chamber results were consistent with data collected by the infrared sensors, which means the sensors may be an effective tool for managing water use in peach orchards.