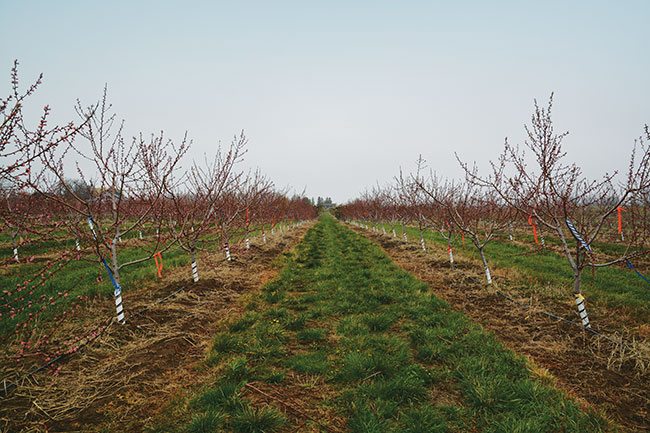 Experimental Harrow Dawn orchard just prior to bloom, on May 4, 2021. Photo courtesy of John Cline.

Canadian peach growers currently rely on the labour-intensive process of hand thinning to ensure a proper fruit load – and the cost behind it can be one of the biggest profit variables they face each season. Based on a research project evaluating a new active ingredient for chemical thinning in peaches, it’s possible there’s a solution coming to meet that challenge.

John Cline, professor of tree fruit physiology at the University of Guelph, is the principal investigator for research trials studying a new compound called 1-aminocyclopropane-1-carboxylic acid (ACC) in peaches. Partnering with Kathryn Carter, fruit specialist with the Ontario Ministry of Agriculture, Food and Rural Affairs (OMAFRA), their goal is to determine whether the compound is effective for thinning peaches and beneficial for fruit quality and yield.

“Up until this point, there’s been really no compound that can thin peaches chemically,” Cline says. This task is usually accomplished through hand-thinning, the process of manually removing excess fruit off the trees in late June or July so the remaining fruit can grow to a marketable size.

Funded by Valent Canada and Valent Biosciences USA, Ontario Tender Fruit Growers and the British Columbia Fruit Growers Association, the long-term goal of the project is to develop a product that’s similar to Accede, which was recently approved for registration by Valent Biosciences in the USA. “This work will hopefully help with the registration of this compound for peach growers in Canada in the future,” says Cline, who notes the Canadian product will be formulated as a granular rather than a liquid like they have in the USA.

Finding the ideal rate for ACC
A naturally occurring hormone in most plants, ACC is involved in the production of ethylene, which triggers senescence. “It’s augmenting or helping the tree to generate ethylene, and the ethylene is causing the fruit to drop,” says Cline, who focused on finding the ideal rate in the first year of the three-year project.

While they had completed some preliminary experiments on a variety called Red Haven at their research station, the first field trials were conducted on an early peach variety called Harrow Dawn and a mid-season peach called Vivid. Cline says they chose them because they are common for the region and the two commercial orchards participating in the trials – Hipple Farms in Beamsville, Ont., and Sunnydale Farms in Jordan, Ont. – provided ideal trees for the trials. “We always try to do some research studies if someone asks,” says David Hipple, owner of Hipple Farms. “I said sure because if this works, it’s a real game changer.”

The trial compared two concentrations of the product – 300 and 600 ppm (parts per million) – at pink bud through bloom until the fruit were 20 millimetres (mm) in diameter. The researchers discovered that applying ACC at 300 ppm caused little to no thinning, whereas applying it at 600 ppm caused overthinning. “We know the product works, but in the future we need to fine-tune the rate, find an optimal rate in between,” Cline says.

One of the reasons for overthinning may have been due to the cold temperatures in the spring, which are known to increase thinning. In fact, the temperatures were so cold when they applied ACC that Cline says it’s amazing the compound worked at all. “I say amazing because for apples, when we applied thinning compounds at cold [temperatures], they generally don’t work well.” 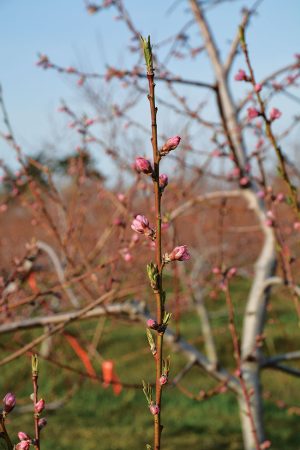 Cutting costs on labour-intensive hand-thinning
While the trial’s main objective was to determine an optimal rate, the reduction in labour for hand-thinning was another major factor they were trying to test. For Harrow Dawn, ACC reduced the time and cost to hand-thin by up to 81 per cent. For Vivid, depending on the rate, it reduced it from 22 per cent to 74 per cent. “Our ideal target is to reduce labour by 50 per cent with this product and then do minimal hand-thinning,” Cline says.

He notes it can take 50 hours per acre to hand-thin a peach orchard and, with other factors such as COVID-19, there’s the added challenge of labour availability. Since Hipple Farms has 65 acres, that adds up quickly. “Thinning is our profit margin, we always say,” Hipple says. “If we have to thin a lot and it’s a heavy year, we still don’t make that much because we spend $100,000 thinning.”

The labour efficiencies were not only seen in hand-thinning, but also at harvest. For Vivid, ACC increased fruit size to the extent that up to 80 per cent of the fruit could be harvested on the first harvest date in August. “Hopefully we’ll continue to see that, so if we can harvest more fruit on one harvest date, that will improve efficiencies for harvesting,” Cline says. With Harrow Dawn, there wasn’t much of an increase in fruit size, however. Part of that may be due to it being an earlier variety that’s already harvested in late July, rather than August.

“It’s all about timing,” Hipple says. “The earlier you can thin, the more size you get at the end.” That’s why ACC could benefit growers at harvest. “If you can thin everything early, you might be able to leave a few more peaches on the tree and then you would save labour and, at the same time, you would potentially have a better yield.”

Hopeful for continued trials with ACC
While the first year of trials has uncovered some important answers about ACC in peaches, there’s still work to be done. “The one rate they tried took everything off the tree and the other rate […] they tried barely touched it, so that tells me we still have to finetune the rate,” Hipple says. “But it works.”

According to Cline, ACC is likely the first ingredient of its kind in the world. There are a few chemical thinners for apples and pears registered in Canada – and the hope is that ACC would also be approved for plums eventually.

Hipple already uses a thinning compound on his ten acres of pears and, as a result, he doesn’t need to send a crew to hand-thin the trees at all some years. It reduces labour that would normally take a couple weeks down to just a couple days at the most. He hopes to see the same benefits in his peaches. “This is the first year, but it looks like there’s something there and that’s super exciting,” Hipple says.

Planning is in process for ACC trials in 2022, but Cline is hopeful about what he’s already seen from the compound – from a reduction of labour to an improvement in fruit size with fewer fruit to pick, pack, store and process. “It’s very unique,” Cline says. “There’s really no compound like this.”