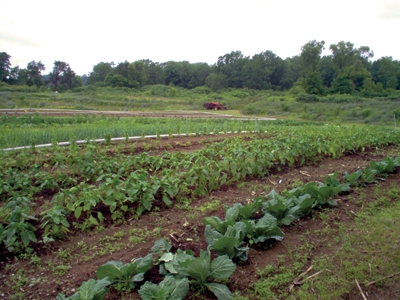 Spring Arbour Farm has 50 acres of land, with 10 acres under cultivation. Half of those acres are devoted to asparagus and the other half to an “extremely intensive” garden.

For the past 19 years, Ken McMullen and his partner Joan have grown and sold organic plants and produce from their 50-acre Spring Arbour Farm in Walsingham, Ont.

The McMullens have also built up a local base of 100 families who regularly receive home deliveries from McMullen. For an annual $300 membership deposit, plus any additional costs, each family is e-mailed an order form bi-weekly. They can choose from an encyclopedic range of locally grown flowers, fruits, garden supplies (compost, seeds and transplants), herbs, mushrooms, preserves and vegetables.

“I get their orders back by e-mail, pick the items fresh and deliver them to an area covering the former City of Toronto and Norfolk County,” says McMullen. “From May through November, my families get the freshest, healthiest local produce possible.”

The success of the McMullens’ organic food home delivery service earned them a 2008 Ontario Premier’s Award for Agri-Food Innovation Excellence. The irony of this situation is that McMullen doesn’t raise organic crops in order to sell them directly to consumers  – or to anyone else for that matter. In fact, the real reason he got into farming was to grow seeds; specifically heritage seeds that were in danger of extinction.

“When Canada began allowing companies to patent plants, I became worried that thousands of varietal seeds would become extinct,” he explains. “The reason was simple: companies who owned plant patents now had no motivation to sell unpatented, less profitable seeds. That is precisely what has happened, especially since the big seed companies subsequently bought out the smaller seed companies and put their seeds out of production.”

As a management consultant, he had an insight into the thinking of the major seed companies, simply because they had been similar to his clients in the energy sector. This is why McMullen helped in the formation of Canadian Organic Growers (COG) and became its president in the mid-1980s.

“One way COG responded to this extinction threat was to form the Heritage Seed program,” he explains. “Now known as Seeds of Diversity (www.seeds.ca), this program is supported by 1,200 volunteers who grow and distribute heritage seeds.”

McMullen’s next move was to encourage seed companies to keep including heritage seeds in their catalogues (and having a base of 1,200 volunteers requesting them helped this effort). His third tactic was to start raising heritage produce – tomatoes, cabbage, lettuce, potatoes and many others on Spring Arbour Farm – and selling it directly, in order to fund the production of heritage seeds and provide his family with an income.

“Basically, my strategy is to grow the seeds and sell the byproducts to my families,” he explains. “Those byproducts include transplants, produce, flowers, preserves and compost from harvested plants.”

Spring Arbour’s operation
Spring Arbour Farm may have 50 acres, but only 10 of these are under cultivation. Half of these are devoted to asparagus; the other half to what McMullen describes as an “extremely intensive” garden.

“My goal is to raise as many different varieties of crops as I possibly can, so that I get as diverse a harvest of heritage seeds – typically compost-loving plants that were popular in 1890 or earlier – as I can,” he says. “This means that we are growing 300 different varieties of flowers, fruits and vegetables.”

As a result of all this diversity, Spring Arbour Farm’s customers never know what to expect when they place their orders. They will get tomatoes, but as for the variety?

The McMullen farm is a year-round organic operation, even though the harvest season only runs from May to November.

“Early in February, I plant the year’s seeds into flats under grow lights, then move them to three-and-a-half-inch pots in our greenhouse,” he says. “Once spring has truly arrived, the seedlings sit outside for a week to harden, and then are planted in our fields. Some also go to clients, for planting in their own gardens. During the warm months, we harvest crops and flowers until the season ends, at which point I harvest the seeds. These are stored upstairs in our house, where I pack them into moisture-sealed foil bags. Some I sell, some I keep and the rest I plant when the cycle begins again in February.”

It was McMullen’s work as a management consultant that put him in contact with major multinational companies. Their focus on plant patents and monocropping worried him; inspiring the heritage seed and organic food operation he runs today.

Here’s the second irony: “The skills these companies use to grow, manage and sell their seeds are the same ones I use at Spring Arbour Farm,” he says. “By this, I mean that I use the very same project-oriented business approach that they use, where discreet operations have to be self-supporting in order to survive. For instance, the money from selling transplants pays for the seeds and greenhouse costs, making the remaining two-thirds of crops free. That’s how I ensure this farm stays financially viable, and how I can help to keep heritage seeds in existence.”

McMullen employs modern business tools, such as interlocking spreadsheets, so that he can forecast customer demand accurately. E-mail and the Internet are also central to his operation, both for ordering and promotion. Meanwhile, any unsold fruits and vegetables become preserves, which he sells during the off-season.

“During December, we make up gift baskets that sell well,” he notes. “It’s just another way of keeping the money coming in, so that we can stay in business.”

An option for farmers?

Despite its small size and low manpower, Spring Arbour Farm is a commercially successful operation. In other words, the McMullens are able to make a living and stay on the land while doing something they value.

“Ten years ago, the area in which I live had about 30 tobacco farms,” McMullen notes. Today, there are only two farms still in operation here – me, and another farmer who has 3,000 acres of soybeans. I understand that he is having a tough time making ends meet, what with the cost of producing the crop and the meager price he gets paid for them. As for me? I’m not rich, but my farm is self-sustaining. And I am growing crops that truly matter.”

But can commercial farmers really make a living following McMullen’s example? If they remain buried in debt and committed to vast acreages, the answer is likely no. But if they sell off much of their land and get their debt down, the answer could be yes.

“There is a real need for this kind of small-scale organic farm,” he says. “Granted, it is important to have access to an urban area to sell to at a decent price, which I have. Meanwhile, the intensive farming we practise here has allowed us to pull out of our marginal land, which has been given back to forests and an irrigation pond. The land is healthier, we are happier, and we feel good about what we are doing. So yes, this kind of organic farming – which preserves plant diversity – can be a profitable option for traditional farmers.”