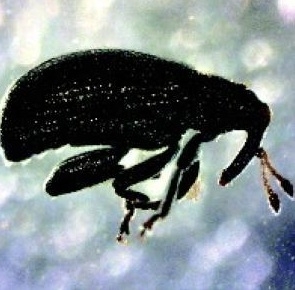 October 1, 2012 – The apple flea weevil, a sporadic insect pest in the early 1900s, has reemerged as a severe pest in organic apple orchards in Michigan, where outbreak population levels have been observed since 2008, and damage has resulted in up to 90 per cent losses for apple growers.

According to the authors of The Reemergence of an Old Pest, Orchestes pallicornis (Coleoptera: Curculionidae) – an open-access article appearing in the most recent issue of the Journal of Integrated Pest Management – the weevil can be managed by broad-spectrum insecticides used in conventional agriculture, but there are currently no proven management options for use in organic production. As broad-spectrum materials are replaced by reduced-risk compounds, it is possible the apple flea weevil will increasingly become an important pest in apple production.

The apple flea weevil is a small, two to three millimeter black weevil with enlarged high legs for jumping. Adults feed on buds and leaves, and the larvae are leaf miners.

In the article, the authors discuss the apple flea weevil’s biology and the damage it does to plants, as well as methods for growers to monitor and manage them.