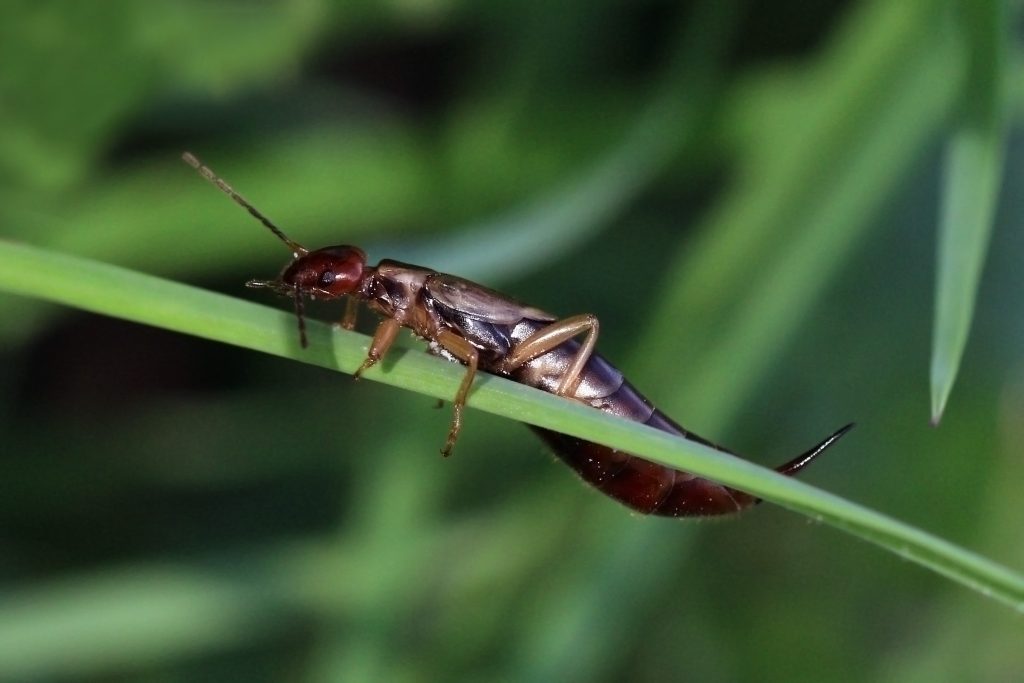 February 9, 2018 – For growers, a fundamental element of integrated pest management is knowing what pest and beneficial species are in your fields. But what if there’s an insect and no one knows if it’s good or bad?

That was the situation for apple growers in Washington when it came to the European earwig. The bugs were there, but no one knew if they helped growers or harmed their crop.

In 2014, the same year Robert Orpet began his doctoral program, there was a bad outbreak of woolly apple aphids in Washington orchards.

“The trees looked like they were covered in snow,” he remembered. “It was very visible, and people don’t like that.”

Orpet was part of an interdisciplinary team looking into the aphid, and one of his tasks was to interview growers about natural predators. Although there was some scientific literature in Europe that suggested earwigs were aphid predators, very few growers named them as important beneficial natural enemies.

Many, in fact, said they thought earwigs were pests that damaged their apples because they’d found earwigs in cracks in their fruit.

Orpet had an idea why grower’s perceptions and the scientific literature might differ.

“Earwigs are active at night, so people don’t see them eating aphids,” he said. “They also move into tight spaces, a behavior called thigmotaxis, so it wasn’t clear if the insects were causing the damage to the fruit or just sheltering in the damage.”

Another possible explanation was that the European literature was just wrong.

“What literature there was tended to be observational and anecdotal,” he said. “The question had never been tested experimentally in a realistic field situation.”

So, with a graduate student grant from the Western Sustainable Agriculture Research and Education program, Orpet designed an experiment to test the positive and negative effects of earwigs in apple orchards.

He set up experimental sections in four different orchards and, in each section, either added earwigs, removed earwigs or left them alone. Because of the insects’ small-space-seeking behaviour, they are easy to trap in corrugated cardboard rolls and move from one place to another.

The results were pretty clear.

First, earwigs are aphid predators. Not only did his numbers support that, he captured video of a single earwig completely consuming an aphid colony. (See it at youtube.com/watch?v=sSFakIgkfMI)

The damage question was a bit more complex, but also came out in the earwigs’ favour.

Orpet did find stem-bowl splitting in some apples – a flaw more common in the Gala variety – and there were earwigs in some of those splits. And in a handful – 17 apples in the augmented areas and five in the removal areas – those splits appeared to have been expanded by the insects.

“My conclusion was the earwigs didn’t cause the cracking but did exploit the existing damage,” he explained.

He’s scheduled to graduate in August and has already shared the findings at growers’ meetings: clear evidence that earwigs are beneficial natural predators in apple orchards.

And, if growers are still skeptical, Orpet can always call up the video.

Read more about the project at: projects.sare.org/sare_project/gw18-039/