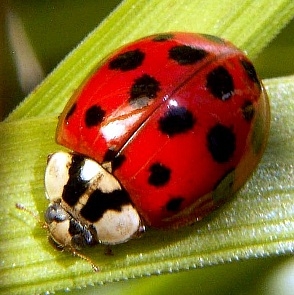 July 31, 2012 – In retrospect, introducing the Asian ladybird into Europe was a serious mistake. The insect was introduced some 20 years ago in a conscious attempt to combat aphids. But research carried out at Wageningen UR (University & Research Centre) into the invasion of this foreign insect has shown that the disadvantages far outweigh this single advantage. The Asian species is displacing the native European ladybird and has become a pest that can contaminate homes and spoil the taste of wine.

The researchers concerned have reported their findings in the latest edition of the scientific journal PLoS One.

The Asian ladybird, Harmonia axyridis, which originated in China and Japan, is larger than its European counterpart and has an almost invisible dent towards the rear of its wing cover; the colour and dots are much the same. The foreign insect was introduced into France in the early 90s, and was first used in the Netherlands in around 1996. The Asian ladybird was a formidable weapon in the fight against aphids in greenhouses and on avenue trees, from which lice excrete sticky honeydew onto cars. However, time has shown that these insects, which have very few natural enemies in Europe, are also devouring the native ladybirds. Furthermore, colonies of the Asian variety hibernate in houses and other buildings, where their excrement can cause contamination. Last but least, it has been discovered that when the supply of aphids runs out, this insect has an appetite for grapes and spoils the taste of the wine.

In order to understand how the Asian species has been able to establish itself in Europe so swiftly and decimate the native ladybird population, PhD student Lidwien Raak from Wageningen University and researcher Marieke de Lange from Alterra, part of Wageningen UR, conducted research into the biology of this invasion. They carried out experiments on both native and Asian ladybird species. Previous laboratory tests had shown that the Asian ladybird would always win a physical fight between the two species. But the researchers from Wageningen wanted to know whether this was also true in the wild. They were keen to discover how often they encounter each other, and whether the native ladybirds could escape. The two devised a clever experiment whereby native and foreign ladybirds were placed on the leaves of lime saplings. Their behaviour was monitored for many hours. The long-term observations generated clear data that is at odds with the results of laboratory experiments. They found that native ladybirds often manage to escape their Asian counterparts by running away or dropping to the ground when under attack. However, if their attempts fail, the highly aggressive Asian ladybirds will devour the two European species and the native Dutch species. This goes a long way to explaining the success of this foreign insect.

On discovering that introducing Asian ladybirds had been a mistake, use of these insects in Europe was banned. Unfortunately, populations had already become well-established in many European countries. The best way to tackle the nuisance caused by non-native animals and plants is to introduce natural enemies. But this too can be a risky business, which is why the Netherlands has asked Wageningen University and the Plant Protection Service to draw up an environmental risk analysis for the natural enemies of non-native species.