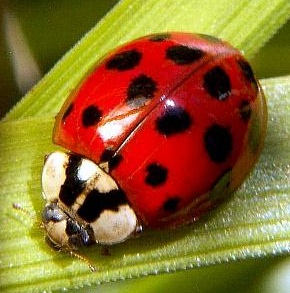 
March 24, 2009, Stoneville, Miss. – Multicoloured Asian Lady Beetles (MALB) are appreciated by farmers – until the pest-eating insects decide to become a pest themselves.

The beetle, Harmonia axyridis, becomes a nuisance insect when it runs out of natural pests to eat and starts snacking on fruit and vegetable crops, including wine grapes.

U.S. Department of Agriculture (USDA) Agricultural Research Service (ARS) scientists have sought to develop methods of keeping the predators under control. Most recently, ARS entomologist Eric Riddick and colleagues in Stoneville, Miss., in collaboration with ARS natural product chemist Kamal Chauhan at Beltsville, Md., tested compounds in catnip oil that naturally repel the beetles, causing them to fly off, stop crawling, move back or turn away.

In studies at the ARS Biological Control of Pests Research Unit in Stoneville, 95 per cent of adult male and female lady beetles altered their course upon encountering filter paper impregnated with the highest of three doses of the catnip compound nepetalactone. The researchers chose nepetalactone because it had previously been shown to repel some species of cockroaches, flies, termites and mosquitoes.

They also tested nootkatone (a grapefruit extract), iridomyrmecin (another catnip oil compound), and other plant-based repellents, but none performed as well as nepetalactone. Turning away – more so than the three other avoidance behaviors – characterized the beetles’ response to the compound, report Riddick and colleagues in a recent issue of the Bulletin of Insectology (http://www.bulletinofinsectology.org/pdfarticles/vol61-2008-081-090riddick.pdf).

Ultimately, such observations could lead to a “push-pull strategy,” combining repellents that deter lady beetles with traps that lure the predators to an attractant for collection. According to Riddick, the push-pull strategy offers an alternative to insecticide spraying and could help to preserve the insects’ usefulness as an efficient predator of aphids, scale and other soft-bodied arthropods that damage plants.