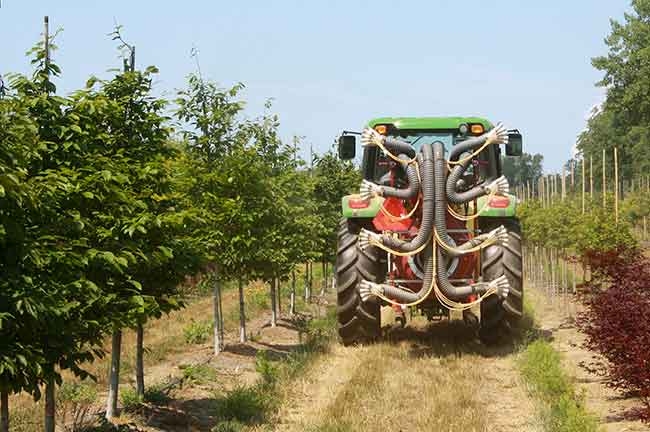 ARS’s new automated spraying system can detect the presence, size, shape, and foliage density of trees and then apply the optimum amount of pesticide in real time. Photo by Heping Zhu

When applying chemicals to crops, where the chemical is delivered is sometimes more important than how much is delivered.

The system has many parts that have to work together with precision, including a high-speed laser-scanning sensor working in conjunction with a Doppler radar travel-speed sensor.

“Our field experiments showed that the precision sprayer, when compared to conventional sprayers with best pest management practices, consistently sprayed the correct amount of chemicals, despite changes in tree structure and species,” Zhu says.

Additional tests in an apple orchard demonstrated that the new sprayer reduced spray loss beyond tree canopies between 40 and 87 per cent, airborne spray drift by up to 87 per cent, and spray loss on the ground between 68 and 93 per cent.