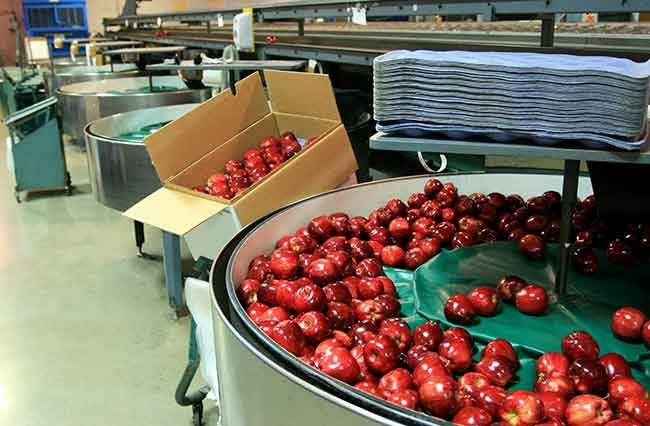 Producers with packing facilities should consider having an adjustable shelf that sets the packing boxes at an optimum 12 to 15 degree incline from the horizontal so they tip in toward the worker. Photo: Dreamstime

The old axiom of “thinking outside the box” applies well to fruit and vegetable producers looking for ways to reduce costs in their cooling-packing facility, says Hugh Fraser, a consultant with OTB Farm Solutions and retired extension agricultural engineer with the Ontario Ministry of Agriculture, Food and Rural Affairs (OMAFRA).

“The first thing I am going to say is to stop coaching and sit in the stands for a while,” he says. Take note of where your produce is not flowing in a straight line and where travel distances could be a lot shorter.

“Look at things from a different perspective and ask key workers for their good ideas on efficiency and reward them,” Fraser says. “With a forklift, you can assume that it costs about $20 per hour to own, fuel and operate, and that’s on the conservative side.

“Let us assume you are picking seven hours per day and that you have 50 picking days per season, and that you pick 60 bins per day. Let us also assume that each bin is touched about 12 times per cycle.”

Fraser says the cycle starts with an empty bin that goes to the orchard to be filled, then comes back, goes into cooler storage, then the pack line to be emptied before the process repeats. He estimates the bin is touched one to three times at each location.

“Over the course of the season, this adds up to about 36,000 touches,” he says. “This is costing you about 20 cents every time you touch that bin. I know that doesn’t sound like a lot of money, but after you touch all those bins 36,000 times in the season, there is a lot of money to be saved.”

Fraser says to also think about forklift trips and how time
gets added.

“Slowing around corners can waste a lot of time, or blind spots where you can’t see what’s coming, or busy areas where you may have to slow down because it’s a bottleneck,” he says. “Every time you travel an extra metre, you add one second to your trip.”

Moving bins to get at bins and then moving them back is a big time waster so think about ways to reduce the number of moves for the forklift, he says. Be careful around obstructions and in poorly lit areas, and try to handle the optimal combination of bins that will safely save you time.

“Try to stop the re-warming of produce out of storage. You spend a lot of time and money to make the produce cold and then we bring it out to pack it and it gets re-warmed. It has to spend as little time out of cold storage as possible.”

He remembers being in California where they had bins of produce passed on a conveyor through a hole in the cold storage wall right onto the packing line, which reduced the time the produce was out of storage.

Fraser says all produce cools quickly at first, then slowly over time, regardless of the produce type or the style of cooler. In a typical forced-air cooler, produce will cool about 3 C in about 12 minutes, by 6 C in 24 minutes and by 9 C in 36 minutes.

“We can’t stop re-warming but there are some things we can do to slow it down,” he says.

Produce actually re-warms just like it cools, so it warms quickly at first then slowly over time.

Fraser uses peaches as an example.

“Assume that produce coming out of cold storage and onto the packing line is at one degree C and that it rewarms at only half the rate of forced-air cooling, which is very possible. So, in 12 minutes the temperature would rise by 1.5 degrees to 2.5 degrees, in 24 minutes by three degrees to four degrees, and in 36 minutes by 4.5 degrees to 5.5 degrees.

“At 5.5 C, we are getting into the danger zone for potential mealiness with peaches,” he says. “Trying to re-cool peaches after you’ve got them in baskets and into the shipping container [is] very, very difficult.”

Ideally, you want the shortest possible time out of storage to keep that coolness.

“Do a simple test on your time out of storage. Let’s assume you dump your first bin at 8 a.m., and your last (60th bin), is packed out by 6 p.m., so it took 10 hours to pack 60 bins. That’s about 10 minutes on average per bin. It’s worth doing a little test to convince yourself that stuff is not out of storage very long.”

Another way to reduce costs is to improve labour efficiency on the pack line, he says. Researchers at the University of
California talk about having an adjustable, soft floor with a foot rail so that people can change their positions throughout the day. For shorter workers, the floor can be raised to allow their forearms to be nearly horizontal.

“It’s a simple thing but it can be a big thing,” he says.

Another idea to consider is having an adjustable shelf that sets the packing boxes at an optimum 12 to 15 degree incline from the horizontal so they tip in toward the worker. This position allows the worker to keep their upper arms more comfortably at near vertical.

Fluorescent lighting should ideally be in the range of 500 to 1,000 lux – a unit of illumination.

“Many packers are older and they need better lighting. Workers should also be rotated to reduce fatigue and monotony.”

Fraser suggests not implementing these changes across the board, but to start with only a few workers to see how they respond to the changes.

“Your workers will tell you very quickly if they like what you did or not,” he says.

In some peach packing facilities, it can take 10 minutes of down time to switch containers on the line and it can easily happen twice a day.

“To get the most efficiency out of your coils, ensure they are drawing cold air through and around the produce so it’s cooling it. Air always takes the path of least resistance and it will not flow through bins or pallets unless it is forced to do so. Also, if you restrict airflow, or have short-circuiting of cold air back to the coils, you’re going to have faster frost buildup and more frequent defrosts required, which means higher electricity costs and slower pull
down times.

“You have to make the cold air in your storage do a better job for you,” he says.

“You should have at least 12 inches of space under the coils so the air has room to get back to the cooling coils and get re-cooled,” Fraser says.

“It’s easier to cool fruit in a bulk bin than after it is packed in a basket and placed in a corrugated container. Fruit not cold when packed is more susceptible to bruising and a shorter shelf life.”

Over his 35-year career, Fraser has found the need for more cross-pollination among farms.

Greenhouse vegetable and flower operations are highly mechanized and have pack lines, forklifts, automation and all can learn from everyone else. They also pack in containers and some use forced-air coolers.

“Your non-competitors are going to share good ideas with you more than your competitors will,” he says.

Having a long-term plan is another area that needs work.

By thinking outside the box, producers can reduce costs and streamline operations. By having an expansion plan in place, they can be ready for whatever life brings their way.