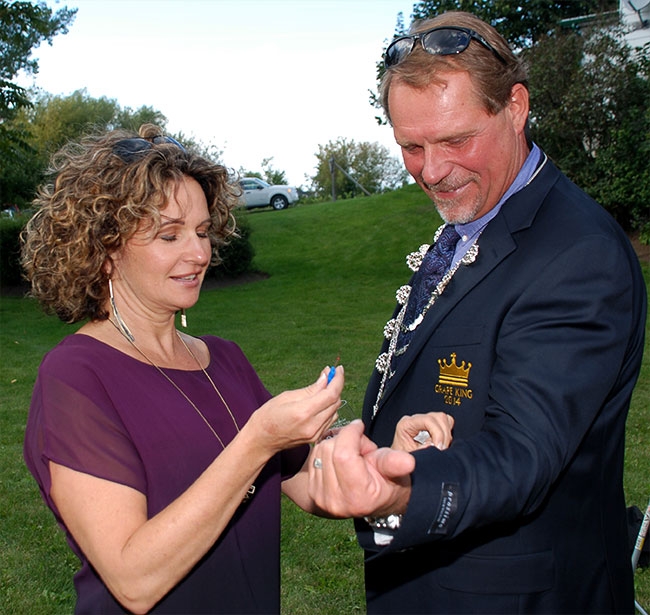 Seasonal crop farmers more often mark the passage of time in harvests, not years — good ones, not so good ones, and the ones they painfully remember but would rather forget. So it’s no surprise that 51-year-old Kevin Buis, the reigning Niagara Wine Festival’s grape king, says he been growing grapes for “29 harvests,” not years.

That would make him 22 when he graduated from Guelph University’s agricultural engineering program to rejoin his father Pieter and his older brother Peter, 59, on the family farm in Niagara- on-the-Lake. The large backyard of the farmhouse near the shore of Lake Ontario was where his coronation was held last September to kick off the Niagara Wine Festival. He’s the 58th grape king and joins his brother, who was grape king in 1987, in the royal family.

As for their work relationship, Kevin says they have no specific job titles: “We’re both in the vineyard, but I’m around the plants a lot more and Peter is around the equipment.”

The judges were impressed by the operation’s soil management, vine training and innovative grape canopy systems practiced by the two brothers, who grow grapes under the farm name Glenlake Orchards and Vineyards. Kevin has been active in the horticultural community by hosting research trials for the agri-chemical industry to enable the registration of new pesticides, and undergraduate field programs conducted by students in the viticulture program at Niagara College and Brock University’s Cool Climate Oenology and Viticulture Institute.

He’s been particularly active over the years with the municipal farm irrigation committee that oversees the use of drainage ditches to bring water from either the Niagara River, the large 2,500 acre Ontario Hydro reservoir, or the Weiland Canal to growers in the town.

One of those ditches runs through the backyard of the 23-acre home farm, which is now only a small part of the almost 400 acres that are owned, leased or cropped under management agreement by Glenlake. Three-quarters is now in grape production.

That’s a dramatic change from the time the Buis family was best known for growing clingstone peaches for what was hoped to have been a rejuvenated peach canning industry in Niagara.

“It was a hard time letting go of stone fruit, though it is still a small part of our business,” Kevin said about a transition from fruit to grapes that began in the mid-1980s.

At that time, Ontario’s wine industry faced an uncertain future. A free trade agreement signed between Canada and the United States was one of three significant events that had some impact on the decision to switch to grape growing. Others were the sale and eventual closure by Kraft Foods of what at the time was the only fruit processing plant east of the Rockies in North America; and about the same time an aggressive campaign by the Canadian Food Inspection Agency (CFIA) to eradicate plum pox that found it’s way into Canada from diseased peach rootstock from Pennsylvania.

Under the North American Free Trade Agreement, growers were compensated if they pulled out grapes and replanted, but many growers were skittish of an uncertain future and Glenlake was able to buy grape farms put up for sale.

Kevin recalls the first sale was 20 boxes of Cabernet Sauvignon grapes loaded on a farm wagon and sold to the nearest winery.

“A year later, they offered to buy our entire crop,” he said.

As is his manner, he puts the transition of the family business from tree fruit to grapes more simply: ”Back in the 1980s, we planted a few grapes, then a few more. We just kept putting them in and they (wineries) kept buying them.”

While that may sound like a simple formula for success, there was a real fear in the 1980s that a surplus of grapes would result as a stream of new plantings came into production. Instead, some poor vintages that reduced tonnage and a number of new mid size and craft wineries helped to take care of any surplus.

Kevin’s father, Pieter, now 83, retired in 1998 leaving the farm operation to his sons. He is best known as an innovative peach grower and a long-time chairman of the Ontario Tender Fruit Producers marketing board. Those who know him well also know he’s a very good amateur winemaker, a hobby that he passed on to Kevin.

His favourite wine? He’s a big fan of Chardonnay, which Niagara growers and wineries have done well making world class, as well as aromatic white wines.

Kevin is married to Jacqueline Osvirk and they have a blended family of five. Kevin’s two boys – Keelan, 17, and Aidan, 15 – may follow in their father’s footsteps on the family farm, but since they’re still young it’s hard to say, he said.

How did the “royal” vineyard measure up?
Growers are judged in nine categories: the number of grapes cultivars and how difficult they are to grow; disease, insect and weed control; grape canopy and soil management; overall quality of the vineyard, and miscellaneous and outreach. The last two categories – miscellaneous and outreach – are the extent to which a grower uses new techniques and is involved off the farm.

“It was a challenging year (2014) for disease management, “ said Wendy McFadden Smith, a tender fruit and grape pest management specialist with the Ontario Ministry of Agriculture, Food and Rural Affairs, and one of two grape king judges. The other is Jim Willwerth, viticulture scientist, at Brock University’s CCOVI (Cool Climate Oenology & Viticulture Institute).

“Disease and insect management in the Buis’ vineyards were excellent,” she said, adding it was an additional “logistical” challenge growing a number of different grape varieties on multiple farms.

The judges were impressed with the operation’s dedication to nutrient and soil management on the farms, particularly with an eye to improving terroir-based wine quality. To that end, the Buis family has a rotating 10-year sampling plan for plant tissue of the many grape varieties and soil analysis in the vineyards. Low maintenance cover crops between the rows of grapes help with vine vigour management and improving soil health.

As for innovation under the miscellaneous category, Glenlake was the first in Niagara to use the Scott Henry training system and “ballerina” grape canopy that was developed ion New Zealand, which is also a cool climate grape growing area. While it’s a labour intensive training system each spring, and can expose grapes to mildew, it increases yields. And, Glenlake was one of the first to use multi-row crop sprayers from France.

“Kevin is a great advocate for the industry and collaborates with researchers from OMAFRA and the CCOVI,” said McFadden Smith.