Changing palates and practices in Canadian winemaking leave vineyard managers looking for ways to change grape varieties without losing years of production – one of which is grafting. 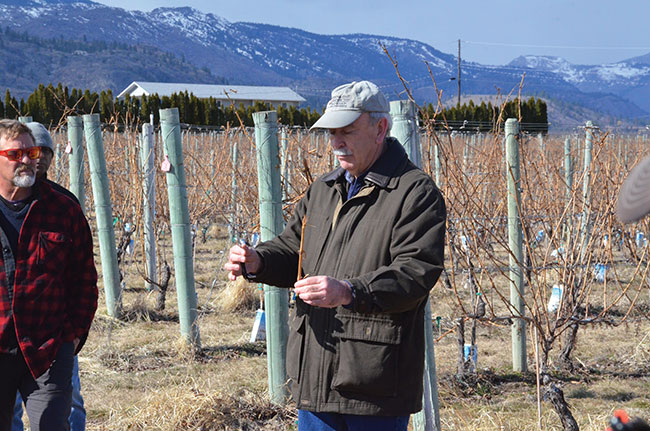 As wine drinker’s tastes have evolved, along with viticulture and vintner practices, vineyard managers must look for ways to change up varieties.

“We had this block of Chenin Blanc vines,” says Troy Osborne, viticulture manager for Arterra Wines in the south Okanagan Valley. “We were looking to grow more Gewurztraminer, so after considering the option of pulling out and doing a full replant, we settled on grafting the block over about 20 years ago.” Osborne was hosting a grafting field day to follow a seminar from Larry Bettiga, viticulture farm advisor with the University of California, at the 2020 Insight Wine conference in March, in Kelowna, B.C.

Bettiga confirms that’s the major reason to do a field or top graft. “You may be looking to plant a different variety,” he says. “Maybe you have decided that you have the wrong variety for that spot, maybe your wine maker wants a new variety, or you are adding a different clone to add complexity to your wine.”

Saving the cost of a full replant and avoiding a three- to four-year loss in production are the economic drivers behind grafting. “Compared to the cost of a full replant at $20,000 to $25,000 CAD an acre, a good grafting crew will run you $5,000 to $6,000 CAD an acre,” Bettiga says, using costs from a 2014 study. “You are taking an established root system that is used to supporting 20 shoots and channeling that into two short canes, so the first-year growth is amazing. You often are back in full production after two years.”

But grafting is not a slam dunk. There are many factors to consider before you decide to graft, Bettiga explains, and a full site evaluation should be completed before planning any type of redevelopment. “The most important factor is the condition of your vineyard,” he says. “You have been farming this block awhile, so you likely have a pretty good idea of what is going on.”

While certain rootstock, varietal, and graft varietal combinations will work better than others, there are no hard rules. You may graft red onto white and vice versa. “If you are able, try a row first before you commit to changing your whole block,” Bettiga advises.

Vines should have minimal trunk damage – either cold damage or bark wounds – to ensure that the new grafts have a good start and the chance of a long maturity. “If you find cold damage that is predominately in the cordons, work back down the trunk and you should be able to find a spot below the damaged tissue to place the graft,” Bettiga says.

Vineyard infrastructure is also important. “You need to ask yourself if something needs to be improved,” he says, adding there are a number of factors to consider. Growers should review the layout and spacing of the current vines and determine if they are the best option for the site, as well as the new variety. The trellis system also needs to be evaluated. “Is it sturdy or in need of repair?” Bettiga asks. “Or is the irrigation system in need of upgrading?” And lastly, is there a need for major soil amendments?

Bettiga also encourages growers to think of their future plans, such as whether the block layout is suitable for the mechanical harvester they might be hoping to purchase in the next couple of years. “If any of the infrastructure needs a refit, you may be spending money on grafting when a major reconstruction is what will be needed for the site in a couple of years,” Bettiga cautions.

And grafting is final. “You do limit your options to change at a later date,” he says. “You can’t graft onto a graft.” 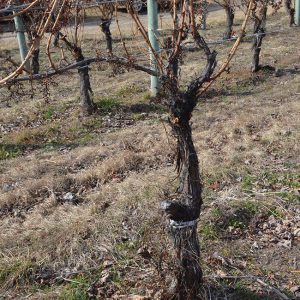 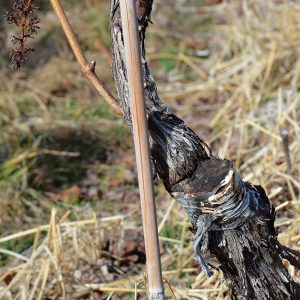 Close-up of a graft at the Arterra Wines vineyard in the Okanagan Valley.

Another consideration is access to a good grafting crew. “You need at least a 90 per cent success rate across a block for grafting to be economic, and that only comes from an experienced crew,” Bettiga says. “If not, you are going back to fill in gaps in the block the next year, and your production could be very uneven for a couple of years. Depending on the impact of the first graft, the vine may not be able to take a second try.”

Osborne confirms this. “We used a local apple grafting crew for some of our work, but it was not successful,” he says. “It is just not the same skill set, so we brought in a specialized crew from the [United] States.” That California crew would do 10 to 20 acres per year in the early 2000s, Osborne says. “We had members of our own team train along with the contractors,” he explains. “They are able to cover the small amount of grafting work that we do now.”

Any of the three grafting styles – either cleft, side, or whip – will work, Bettiga maintains. “It’s really up to the grafting crew: what they are most familiar with and what they are able to guarantee for a success rate.”

Before a crew comes in, it is usually the responsibility of the vineyard to have the cane growth removed and the vine cut off at the agreed height. “That part of the prep is up to the vineyard,” Bettiga says. “The crew will leave you with the completed graft covered in black tree seal.”

The first follow-up job will often be to paint that black seal white to avoid the graft area getting too hot. The second task will be to monitor the vines for sap bleeding and making small slash cuts, if needed, to remove the pressure. “You don’t want the mature root system pumping too much sap into that graft area and forcing the join apart,” Bettiga cautions.

Training the new shoots is critical, he says. “It is very important to watch those young buds for growth and as soon as they can reach, tie them onto the trellis wires. The tender shoots are very vulnerable to tearing in the wind as they grow larger.”

Irrigation and nutrient schedules will need to be adjusted, as the new shoots have different needs than a fully mature vine. If all goes well, the grafted grapes could be harvested at the end of the second year.

Osborne explains that the block of grafts on the Arterra winery’s Chenin Blanc vines only had a 65 per cent success rate, leaving many of the vines with a straggly look. During the field day, he pulls out a short pruning saw and proceeds to cut one vine completely off, several inches below the graft union. It seems a bit drastic until he explains.

“The marketing department,” Osborne says with a grin. “They have decided we should use some Chenin Blanc grapes again, so we are chopping off all of the grafts and taking them back to the original variety.”

Virus concerns limit grafter’s options
As the incidence of leafroll and red blotch viruses spreads across North American vineyards, viticulturists are pausing their grafting plans. VineTech Canada CEO Wes Wiens says the company is recommending that growers not graft at the present time, until testing of mature vines is more complete and clean material can be sourced from certified nurseries.

In order for a grafting job to be successful, both the parent vine and the scion wood need to be virus-free, Larry Bettiga, viticulture farm advisor with the University of California, cautions. “You have to test both your vines and the source of your grafting canes for viruses,” he says. “At the least, certain viruses and varietal and rootstock combinations will make the graft incompatible and it will not take. At the worst, you are spreading the virus through your vineyard.”

There are currently three Canadian nurseries that have received interim certification from the Canadian Grapevine Certification Network (CGCN). This means that they are able to offer stock of select varietals that is certified free from Grapevine Leafroll associated Virus 1 and 3, Grapevine Red Blotch Virus, and Pinot Gris Virus. See https://www.cgcn-rccv.ca/site/grapevine-certification-interim.

Canadian growers also have the option of sourcing material from the U.S. or Europe, but should be aware that not all certification programs are equal.

“Growers need to read into the program,” says Darien Temprile, project manager for the CGCN. “Some nurseries may not be testing for red blotch like CGCN is, and propagation and shipment of grapevines is considered to be a high-risk pathway for the movement of plant pests. Always ask your nursery what viruses they are screening for.”