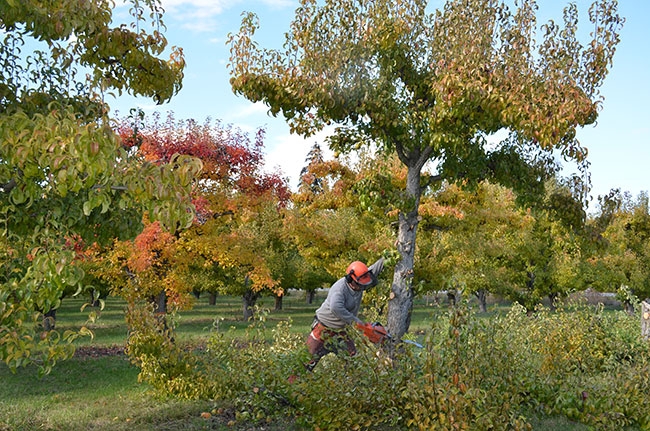 A faller works to take out 50-year-old Anjou pear trees in Steve Day’s Kelowna, B.C., orchard. They will be replanted with Bartletts in a higher density system.

The B.C. tree fruit replant program is having a positive affect on the province’s fruit growing industry and has been so popular, the province’s Ministry of Agriculture has provided additional funds.

“I think it has created an optimistic atmosphere,” says Fred Steele, B.C. Fruit Growers Association (BCFGA) president. “Two years ago, for the first time in more than 30 years, the industry actually put more apple trees in the ground than we took out. We are now up about 100 acres.”

“We are happy that the program is running for seven years,” says Steele. “It allows us to make longer term plans that will help to build sustainability in the industry.”

The program is administered by the BCFGA, on behalf of the provincial government, and includes apples, pears, cherries, peaches, nectarines, apricots, plums and prunes.

An applicant must own or lease the land to be replanted and have an orchard of at least five acres. The minimum eligible size of a replant block is one acre and the maximum allowable acreage is 10 acres per farm operation.

For B.C. grower Shayne Witzke, the replant assistance fits in well with the family’s five-year plan.

“I am looking at replanting a little over 1,000 trees per year for the next three years,” said Witzke, who along with his father, Brian, has a 30-acre apple orchard in rural Kelowna. “I’m replanting with Honeycrisp and Ambrosia and I’m looking at some more Galas as well.”

The Witzkes grow McIntosh, Gala, Honeycrisp, Spartan and Ambrosia.  They were one of the largest growers of Golden Delicious in the Okanagan Valley, but at 10 cents a pound to the grower, Goldens have been pulled out to replant, or grafted over to Ambrosia and Galas.

“Right now, with the limited supply of Ambrosia and its popularity in the market, we can get 50 cents a pound,” says Witzke.

Finished apple trees for replant can run $10 a tree and some Okanagan growers are choosing to grow their own.

“But that’s only part of the cost,” Witzke points out.

Old trees must be cut, stumps torn out, roots pulled and the land fumigated to destroy pests left over from old plantings. There are labour costs for the trees to be planted with the post and wire trellis that supports high density planting and irrigation has to be installed. The industry average is currently running at $30,000 per acre.

And there is also the lost opportunity cost, as the land does not produce while the trees are getting established.

“You can harvest some fruit before five years,” says Witzke. “But the tree basically doesn’t grow when it is producing fruit and you end up with a stunted tree and smaller, lower quality fruit.”

“The government replant program is a help,” says Kelowna pear grower Stephen Day. “But you wouldn’t want to base your whole orchard management plan on it.”

Day had contract fallers working in his orchard during fall 2016 to take out 10 acres of 60-year-old Anjou pear trees, originally planted by his father in the 1950s. They will be replanted with Bartletts in a high-density system, which will give a much greater yield per acre.

The program is so popular, growers have found extra dollars of their own and gone back to the government for more.

“The government said in the first year that they expected the program to be undersubscribed,” Steele says with a chuckle. “Well, 2015 was oversubscribed and we were able to go back to the government and get a top up.”

For the 2015-2016 year, the government agreed to match $117,000 put forward by Summerland Varieties Corp (SVC). SVC is the variety rights management company, located in Summerland, that licenses new varieties of tree fruits and berries domestically and internationally from provincial breeding programs. It is a wholly owned subsidiary of the BCFGA. In addition, SVC found another $55,000 for a total of $289,000. Almost all of the 127 applications were accepted and, of those, 97 per cent received a share of the funding.

Glen Lucas, BCFGA’s general manager, reports that this fall they have received 170 applications for the 2017-2018 year. He notes that a change in the criteria has led to a marked improvement in the quality of the program.

“The first year we accepted applications on a first-come, first-served basis and, frankly, there were some applications that weren’t of a very high quality,” says Lucas.

In the fall of 2015, the Ministry of Agriculture instituted a merit–based replant program project scoring criteria. Grower applications are ranked on variety selection for value and location, a planting plan, soil analysis, a cash flow projection and site mapping. Growers must also have the plan signed off by an agrologist and a review committee scores the applications.

These changes caused some initial stir among growers, who felt they were being told how to manage their businesses. But BCMA tree fruit and grape specialist Carl Withler, who helped educate growers in the application process, assured them otherwise.

Tell your story was Withler’s advice.

“If you are in a location where you can’t get Ambrosias to colour up, explain that to us,” he told growers. “If you have an excellent market for your premium McIntosh, tell us that story too.”

Lucas says he feels the government is leading the industry toward better orchard planning.

“Putting the replant plans together can be a hassle, but I think they put the growers in a better place.”

A faller works to take out 50-year-old Anjou pear trees in Steve Day’s Kelowna, B.C., orchard. They will be replanted with Bartletts in a higher density system.

National Tree Fruit Rejuvenation Program
One of the criteria for the B.C. replant program is that the land can only have been bare for a maximum of five years.

“That’s been a problem as our industry has been shrinking over the last several decades,” BCFGA president Fred Steele says.

Records show that in 2005, there were 11,800 acres planted in pome fruits across the Okanagan. That acreage continued to decline over the next nine years at an average of 450 acres a year, down to 8,440 acres in 2014.

“If growers are only getting 10-cents a pound for apples and it costs them 6-cents a pound just to pick them, there is not much reason to keep the trees in the ground,” Steele points out.

He adds that orchardists from B.C. and across Canada have been pursuing provincial and federal governments to support a bare land replant program.

“In the past, we’ve never gotten past ‘No,’” says Steele.

That began to change under the new federal Agriculture Minister Lawrence MacAulay.

“What we learned from talking to Ag Canada parliamentary secretary Jean-Claude Poissant was that we were doing it wrong,” Steele says. “He told us to put together a national proposal and they would consider it.”

“We now have a formal National Rejuvenation Program plan that has been approved by all the provincial associations,” says Steele. “The next step is to gain as much support as we can and coordinate how we will present it to the government.”

The program would rely on private sector funding.

“But like the old student loan program, the government would pay the interest costs for the first few years [they are asking for five years], until you actually get a crop.”  Steele explains.

He adds they are asking that loans for improvements to packing and storage facilities also qualify under the rejuvenation program.

“Over the five years of the program, a government investment of up to $243 million would lead to a $880 million investment by the fruit industry across Canada,” says Steele.