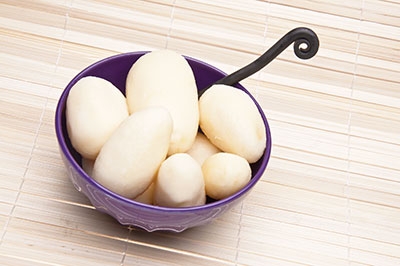 An example of canned potatoes.

The original prepackaged foods came in cans and, as convenience came to be appreciated by busy cooks, recipes called for canned vegetables. It was easy. But, while some canned vegetables seem almost as good as fresh and are handy to have in the cupboard due to their longer shelf life, potatoes are sometimes overlooked on the canned food aisle. This lack of popularity means that research into the best varieties for canning has not happened.

Despite the perception that canned vegetables are “not quite good enough,” the reality is that they are sometimes healthier than their fresh counterparts that have been languishing in the crisper for an extended period. Earlier research showed that canned vegetables which are picked and packaged, often on the same day, are just as nutritional as fresh that are picked and eaten the same day. The shelf life of canned vegetables and their portability without the need for freezer-equipped trucks, make them particularly desirable for remote areas so getting the canning right is important. Sadly, maintaining the quality and look of canned potatoes has been a challenge for processors over the years.

Now, research at the University of Guelph by Drs. Rickey Yada and Reena Pinhero of the Department of Food Science, is examining potato varieties for their ability to be used for canning. Canned potatoes sometimes suffer from a quality defect known as “sloughy-ness” where the outside layer becomes loose and spongy, according to Dr. Yada. He says this defect tends to be variety specific. The processors have mainly found the varieties that experience less “sloughy-ness” by trial and error, he adds.

“It tends to be variety-specific and somehow relates to specific gravity,” Dr. Yada explains. “We studied the starch composition, which is made up of two components known as amylose and amylopectin, and we believe we may have to look at all aspects of each compound.” The research looked at specific gravity, firmness, total starch (amylose, amylopectin, granule size), nutritional components, such as total polyphenols and protein, as well as the antioxidant potential of potatoes which can neutralize free radicals. The research studied varieties such as Russet Norkotah, Sifra, Vivaldi, and Superior, with Atlantic as the control. The highest total starch was identified in Atlantic and the lowest in Vivaldi, but more study needs to be done to see how the starch is affected in the canning process.

“Canning allows us to have convenient, nutritious foods and it may be necessary to re-visit the nutritional qualities of canning in the modern world,” Dr. Yada comments. “We need to look at varieties of potatoes with canning in mind.”

In the past, potatoes used for processing received a good deal of research with varieties often needing to be treated differently in storage depending on their final use, such as French fries or potato chips.  But, for canning, storage would not be an issue, if the right variety can be identified, because the potatoes would be canned immediately at harvest or after short term storage.

“Research will continue and, hopefully, we can find varieties that stand up to canning and have all the nutritional qualities we desire,” Dr. Yada says. “We are looking for varieties with a range of specific gravities and they will be evaluated for canning properties and nutrition.”

Dr. Yada says the research may eventually improve the marketing potential for canned potatoes as well. Once varieties are identified for canning, a marketing campaign may be needed to educate consumers on the nutritional value and quality of canned potatoes.