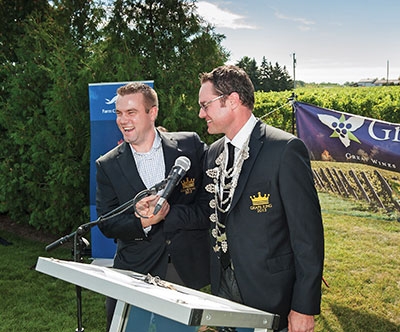 Wes Wiens (right) wearing the chain of office as the 2013 Niagara Wine Festival’s grape king, with 2012 grape king and winery owner Curtis Fielding, who nominated him. The crowning took place in mid-September last fall to kick off the 51st year of the festival.

Whatever the outdoor crop, the first hard frost is an important date on any farm calendar. That’s especially true for grape growers whose harvest, excluding icewine, is particularly susceptible to cold damage.

But while other growers race to harvest before that date, reigning Ontario Grape King Wes Wiens waits for it with anxious anticipation. That’s because it’s the beginning – not the end – of his harvest season and the busiest time of the year at Vine-Tech Canada in Niagara-on-the-Lake.

That first hard frost came on Nov. 4 when the overnight temperature dipped to -6 C, triggering an increase in the workforce from a summer crew of five to a harvest time crew of 45. It’s the time of year to dig up and process the two million nursery vines propagated for the ever expanding grape and wine industry in Canada.

So, how does someone whose business is providing nursery stock become Ontario’ s grape (growing) king? Vine-Tech is an offshoot of Wiens Family Farms, and since all 400 acres and 19 varieties of grapes are “managed pretty much the same way,” Wiens said, “(We) view this award as an award on our family’s behalf.

So did the two judges who commented on the superlative condition of all the family vineyards. In addition, they cited the new grape king’s dedication and involvement to the grape and wine industry, Wendy McFadden-Smith said.

She’s the tender fruit and grape IPM (Integrated Pest Management) specialist with the Ontario Ministry of Agriculture, Food and Rural Affairs at Vineland Station and an adjunct professor in the biological sciences department at Brock University in St. Catharines. The other judge was Prof. Jim Willwerth, viticulture scientist in Brock’s CCOVI (Cool Climate Oenology and Viticulture Institute) grape and wine program.

2011 ‘Outstanding Young Farmer’
“Wes participates in several research projects (with Brock and Niagara College), believes in and is an advocate for the grape and wine industry,” Smith-McFadden said.

A grower’s vineyards are judged on qualities such as cultivating difficult-to-grow varieties; disease and insect control; managing weeds and the soil, or “terroir” as it’s known to grape growers; and overall quality. As well, there’s an outreach category that takes into consideration collaboration with ongoing academic research, innovation that is the result of a grower’s own independent research, use of new technology, and attendance and participation in research and industry events.

It’s not the first time a family operation has been honoured with the grape king title. But in the end, it’s the individual grower who is nominated by any one of some 500 fellow growers who belong to the Grape Growers of Ontario. Wes Wiens was nominated by Curtis Fielding, grower and owner of Fielding Estate Winery, and the previous grape king.

It’s not the first time that Wiens, 36, has been recognized for his achievements in agriculture. He and his wife Briar were named Ontario’s 2011 Outstanding Young Farmers, a ministry of agriculture award. At that time, Vine Tech Canada had captured 60 per cent of the market. In 2010, it propagated some 1.4-million new grape vines for the growing Canadian grape and wine industry.

The Wiens family farm operation includes Wes, his younger brother Gary, his father Abe, his uncle Ernie and his cousin James. And since the Wiens family name is widespread through Niagara-on-the-Lake, it’s necessary to identify which family you’re talking about. Wes’s grandfather Franzk Wiens, whose ancestry is German through Russia, came to Canada from Paraguay in South America in the mid 1970s. He bought a 25-acre grape and tender fruit farm that grew in size under the direction of his sons Abe and Ernie.

Everything but a winery
The family business is an excellent example of vertical integration.  Besides growing the nursery stock that’s planted in the family vineyards, the Wiens family does its own as well as custom work planting new vineyards, trellising, harvesting, trucking, right down to managing vineyards for other growers. Wes and his younger brother Gary (they have two sisters not involved in the family farm operation) have concentrated on everything that’s involved in grape growing short of opening a family winery.

“We’re not going there,” Wes said, with a bit of hesitation. “It’s not on the radar yet. We have enough to keep us busy selling vines, wire and posts and doing total custom farming for some growers.”

Does he have a philosophy about grape growing? It’s a simple one that’s the mantra of the family business: “We do everything as best we can and provide the best products and services for our customers.”

Wes believes that knowing grapes from the nursery to the bottle (he’s a member of a grower wine making club) is an important part of providing the best service.

“You can’t go through life without some kind of philosophy. We bring it to everything we do.”

But the best advice on farming came from his father, who said it’s akin to legalized gambling because you never know what you’re going to get.

“Every season is different and you have to adapt and make decisions that, in hindsight, you may have made differently,” Wes said philosophically. That could be the expense of second-guessing the weatherman by hauling out irrigation equipment at the right time rather than waiting for it to rain as predicted. Or buying expensive wind machines, hoping you’ll never have to use them to protect budding vines from a late spring frost or in the depth of winter really cold temperatures lower than -20 C.

The nursery part of the family business was an opportunity that presented itself 10 years ago when, as usual, his father bought new vines from (Martin) Gemmerich Nursery, also in Niagara-on-the-Lake.

“Dad commented on how well the vines looked and Mr. Gemmerich said, ‘Well thanks. Would you like to buy the business?’ ”

He had no children, and it was a case of who he would like to see carry on a third-generation nursery business that he had established here in Canada.

“He liked our family’s innovative approach to agriculture,” Wes said.

A John Deere mechanic
Development of the nursery stock business fell to Wes, who had gone to Fanshawe College in London to be a farm equipment mechanic. He was one of the first graduating class (in 2000) of the John Deere Agricultural Technician program, a 3.5-year apprenticeship course turning out licenced diesel and hydraulic mechanics. Wes had worked at a couple of farm equipment dealerships in Niagara, but came back to the farm workshop, which also repairs, maintains and fabricates equipment for their own use and for other growers.

It was this innovative spirit that led to mechanically harvesting icewine grapes that are frozen on the vine when picked. Traditionally, it’s done by hand, but getting a crew together, often in the wee hours of the night, proved not very efficient. Looking for a better way, they worked over four years to modify a traditional harvester to do the job and were the first in the world to do so.

According to Wes, getting people out of a warm bed at 2:30 a.m. is one thing; motivating them to pick frozen grapes at -10 C or colder is a harder sell.

“We’d call people and they often wouldn’t show up, and if they did we’d have to motivate them to make the job fun,” he said.