With demand for sweet potatoes on the rise in Canada, growers will be able to ramp up production with better varieties propagated here 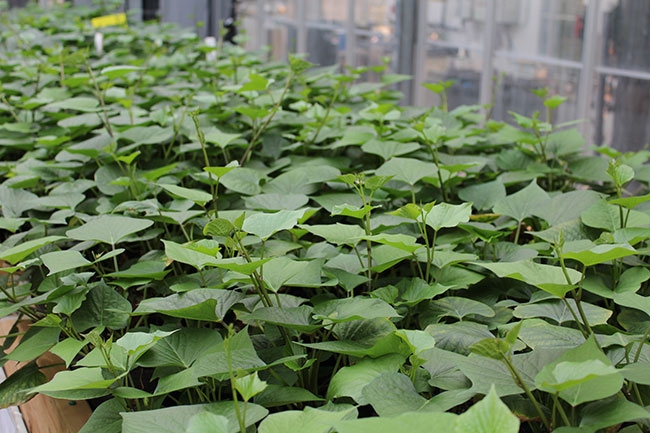 Sweet potato consumption is on the rise across the nation and Canadian horticultural growers will soon have the chance to get more of the action.

According to Statistics Canada, in 2015, more than 55 million kilograms of sweet potato were imported into Canada – in excess of 120 million pounds – valued at more than $59 million. And, although during the last 15 years the sweet potato crop in Ontario has grown from just over one million pounds to 30 million pounds, there are only an estimated 680 hectares of the crop currently being cultivated across Canada, mostly in southern Ontario and Nova Scotia.

To help grow the acreage, the Canadian sweet potato industry sorely needs locally adapted varieties (more on that later) and high quality, comparatively priced propagative material. Commercial growers in Canada currently source almost all of their slips [cuttings from the shoots of mature sweet potato roots that are planted directly into the field or simple hoop houses] from propagators in the southern United States, spending about $2 million on them annually. According to the Vineland Research and Innovation Centre – based in southern Ontario – this is challenging for growers in terms of both the quality of the slips [with logistics and timing issues] and the fact that these varieties are not well suited to Canada’s shorter growing season.

That’s why Vineland’s Vegetable Production Research Scientist Dr. Viliam Zvalo is partnering with industry to make sure interested Canadian propagators have the research results they need to successfully grow locally adapted slips. Dr. Zvalo believes that by partnering with the industry to develop an effective propagation system, growers will be able to purchase superior slips at a reasonable price – and at the right time of year.

“Sweet potatoes are an easy plant to propagate,” he says. “The challenge is to ramp up slip production so that there are large numbers of slips available for a relatively narrow planting window in May or early June.”

With several industry co-operators, Dr. Zvalo is testing various methods of producing slips from the perspective of technical, hands-on practices as well as the economics. Dr. Zvalo is far from a novice with sweet potato production, having almost 14 years of experience developing the sweet potato industry in Nova Scotia from scratch in a position he held with Perennia, that province’s agriculture agency. In terms of the industry partners, Dr. Zvalo says he is working with grower-propagators in Nova Scotia and Manitoba who want to propagate sweet potatoes for their own uses, and with one commercial propagator in Ontario.

“We are examining two propagation methods, one of which is the standard U.S. method of getting slips from bedding the whole sweet potato root,” he explains. “The other, more novel method is to root vegetative cuttings over the winter in a high-density greenhouse. These cuttings are spaced to achieve desired plant density. Through intensive pruning, these plants will create a solid mat of plants from which slips will grow.”

Dr. Zvalo is also experimenting with LEDs to improve the slip production process.

“We need to present the industry with a proven method to produce large numbers of slips of consistent quality, that in the end will still be price competitive,” he explains. “There is value in the short-season varieties themselves that we will have for Canadian growers starting in 2018, but the slips must be available at a reasonable price point and quantity for the growers.”

He will have a summary of the propagation feasibility study available to industry later this year.

“Greenhouse space is at a premium during the February-to-June timeframe with very high-value vegetable and flower crops, and these greenhouses are designed for these specific crops,” Dr. Zvalo notes. “There may be more opportunity for propagating sweet potatoes in greenhouses that are set up to grow shrubs and tree seedlings, and in their production cycles, they might have room to propagate sweet potato.”

Vineland has also been hard at work developing short-season cold-climate sweet potato varieties. In 2015, they conducted yield trials at multiple sites in P.E.I., Nova Scotia, Ontario, Manitoba, and B.C. One variety, likely to receive its name this spring, will be commercialized in 2018. This year, field tests will focus on how to boost yield through factors such as optimized spacing, irrigation after transplanting and optimized fertility management, said Dr. Zvalo.

He notes that most sweet potatoes are consumed in Canada at Thanksgiving and Christmas, making it hard for growers to supply the Thanksgiving market.

“That would require harvest in mid-September, which is too early for the current U.S. varieties. Shorter-season varieties will enable growers to widen the planting window and plant first for early harvest, and then follow with later planting for winter storage.”