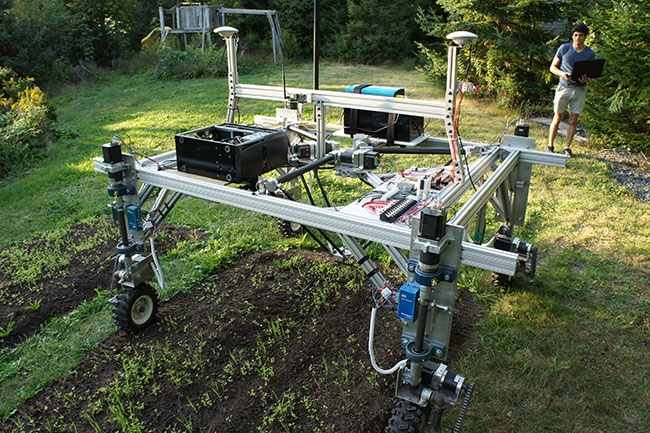 In the spring of 2019, Nexus Robotics will begin testing the robotic weeder infield in Ontario with the help of an experienced team. CREDIT: Nexus Robotics

As producers across Canada continue to struggle with finding and keeping skilled labour, three innovative Canadians have partnered up to explore a highly sought-after solution – Robotics.

While running a vegetable farm in Lunenburg County, N.S., Teric Greenan was unsettled by the number of labour-heavy, monotonous tasks that were necessary to sustain productivity and farm profits.

“I thought that vegetable farming would be a great place to have robotics step in and handle some of the burden and repetitive work,” Greenan says.

“I thought that vegetable farming would be a great place to have robotics step in and handle some of the burden and repetitive work,” Greenan says.

Following his in-field brainstorming, he contacted his friend and computer engineer, Jad Tawil, and the pair proceeded to reach out to Dalhousie University professor of computer science, Dr. Thomas Trappenberg, with the proposal to build an agricultural robot.

“It was really great timing. My background is machine learning and there have been a lot of breakthroughs in recent years surrounding robotics for agriculture,” Trappenberg says.

The three-person start-up entitled themselves Nexus Robotics and began researching. Over the course of their research, it was determined that weeding vegetable crops would be the producer-pain point they would target, specifically looking at onions and carrots.

“It is a cube, five-feet by five-feet and four feet high, so it can go over several roads of the width of a tractor and a robot arm on the interior,” Trappenberg explains.

The machine then operates using a deep neuron network, or what is often referred to as Artificial Intelligence (AI). Once a network is designed, developers feed the machine a number of examples of plant species, both of crop and weed.

“We had to collect a lot of data as you need a lot of examples. Then you show these examples to the learning machine and if you have enough it will train the network,” Trappenberg continues.

Once the program has collected enough data, it processes the necessary features to distinguish between classes. Trappenberg explains that every pixel in the image is labelled with a certain probability that it is a certain kind of plant. Once a species has been labeled a weed, the robotic arm is directed for removal.

Nicknamed R2-Weed2, in a controlled environment the robotic prototype was capable of operating at 99 per cent accuracy when working over a distinguished row.

In the spring of 2019, Nexus Robotics will begin testing the robotic weeder infield in Ontario with the help of an experienced team.

“We have been invited by the University of Guelph and Ontario Ministry of Agriculture, Food and Rural Affairs to do a field trial in Ontario. We will be working with farmers in the Holland Marsh area. I think it will be really valuable for us to have a team of people that are so experienced in the field actually getting involved in the improvement process for this robot,” Greenan says.

With boots on the ground, the group plans to begin testing on onions and hopes to achieve 90 per cent in-field accuracy, while ensuring there is no negative impact to the crop.

“We want to ensure that the way the algorithm works is that, if it is unsure at all whether it is a crop or a weed it won’t cut it. In testing with this high level of caution, it will likely take some time to reach the desired level of accuracy.”

“We want to ensure that the way the algorithm works is that, if it is unsure at all whether it is a crop or a weed it won’t cut it. In testing with this high level of caution, it will likely take some time to reach the desired level of accuracy.”

In terms of feedback from farmers, Greenan says so far, most producer concerns are related to the speed of the robot.

“In the immediate future it will be difficult for us to keep up with a human workforce in terms of speed, but I think as we improve the technology it is just going to get better and better,” Greenan says. “Technology is increasing way faster than it ever has before and I am very optimistic about our ability to improve the design and algorithms to a point that this robot will be very functional and exceed expectation.”

Once Nexus is satisfied with the on-field performance, Greenan says they will look to offer the robotic weeder as a service to Nova Scotia farmers.

“The idea would be that we show up to the farm and charge a per-acre fee. That way, while we are in the development phase, we can ensure that the robot is still working as well as we planned,” he explains. “Offering a service locally will be our entry way into the market, and then once we establish ourselves, we will look at selling the units outright.”

In early 2018, Nexus Robotics set their sights on the 2018 Weed and Feed competition held in Rockville, Ind., in May, which challenged innovators to build autonomous vehicles capable of performing agriculture tasks.

“The competition was a good way to gauge how it was working and what needs to be improved,” Trappenberg says.

After showcasing their robot at the agBOT Challenge, Nexus Robotics earned first place in the international challenge, which included a cash reward of $30,000.

“Throughout this process I have been really surprised at not only how supportive the government has been but also everyone in the agriculture community, just hearing about this and getting excited. I did not expect such unanimous support,” Greenan says.