Equipment Spraying
Robotic weeders coming to a farm near you? 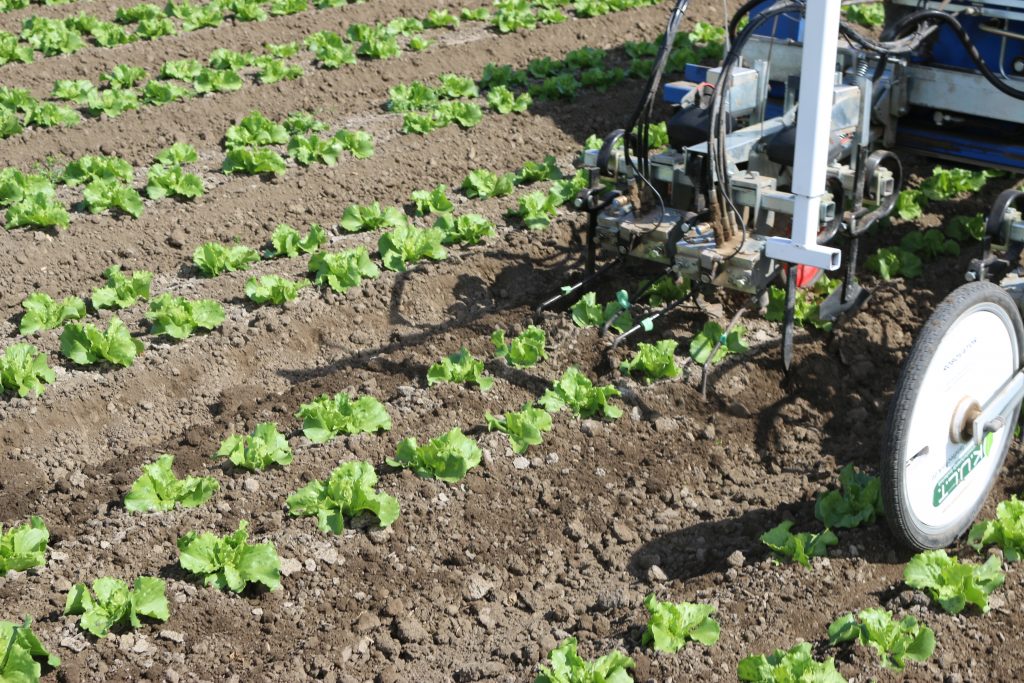 This robotic weeder is operating in a field near Santa Maria, CA in June 2015. The field is full of a specialty crop. Steven Fennimore

January 11, 2018 – The growing popularity of robotic weeders for vegetable crops has grown partly out of necessity, says Steven Fennimore, an extension specialist at the University of California, Davis.

The need for robotic weeders stems from two issues: a lack of herbicides available for use in specialty crops, and the fact that hand-weeding has become more and more expensive. Without pesticides, growers have had to hire people to hand-weed vast fields.

Hand-weeding is slow and increasingly expensive: it can cost between $150 and $300 per acre. That motivates some growers to look to robotic weeders.

“I’ve been working with robotic weeders for about 10 years now, and the technology is really just starting to come into commercial use,” Fennimore says. “It’s really an economic incentive to consider them.”

Fennimore works with university scientists and companies to engineer and test the weeders. The weeders utilize tiny blades that pop in and out to uproot weeds without damaging crops. He says that although the technology isn’t perfect, it’s getting better and better.

That said, Fennimore explains how some companies are training the machines to tell a lettuce plant from a weed. He’s also working with university engineers on a system to tag the crop plant so the weeders will avoid it.

“The problem with the machines right now is that they are version 1.0, and there’s tremendous room for improvement,” he says. “The inability to be able to tell the difference between a weed and a crop requires the grower to be very exact when using them. The rows have to be a little straighter, cleaner, and more consistent because the machines aren’t that sophisticated yet. The robots don’t like surprises.”

The robotic weeders currently on the market cost anywhere between $120,000 and $175,000. For some growers, it is a better long-term option than expensive hand-weeding. Others think it’s a lot of money for a new technology, and are waiting for it to get better and cheaper.

Fennimore believes robotic weeders are the future of weeding in specialty crops. Because of higher labour costs and more incentives to grow organically with fewer pesticides, European growers have been using robotic weeders for some time.

Fennimore is focusing his work on physical control of weeds because it offers the best option. He’s also started working in crops besides lettuce, such as tomatoes and onions. He adds that each crop will require a different system.

“I believe what makes the robotic weeders better than herbicides is that this electronic-based technology is very flexible and can be updated easily,” he says. “We all update our phones and computers constantly, which is a sign of a robust and flexible technology.”