Despite an oversupply in the market, Canadian cranberry production continues to expand. 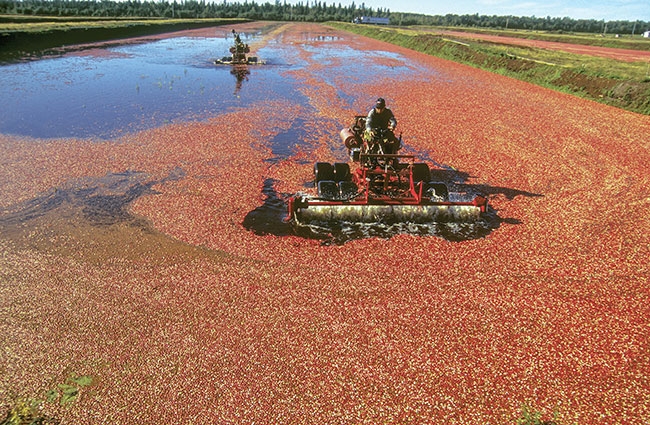 Cranberries were pushed into the spotlight a couple of decades ago after a number of different research initiatives showed off the fruit’s health benefits. Since then, consumer demand has been high and new cranberry products have been developed. Capitalizing on this growth, growers in Canada have been planting new bogs, renovating old ones and otherwise expanding acreage of the tart red berry.

She notes that the Canadian cranberry market is relatively young compared to its U.S. counterpart but with the development of technology and understanding of mechanical harvesting, pond construction, irrigation methods and other techniques, Quebec plantings flourished at the same time fields got up to full production, about five years post-planting. These are the primary contributors to the increased volume of Canadian cranberries in the last few years.

Generally, an increase in yield is something to hail, but if the value in the market drops, it can cause a fruit glut.

At the B.C. Cranberry Marketing Commission AGM in 2018, Grant Keefer of Yellow Point Cranberries and chair of the B.C. Cranberry Growers notes that trends show the world’s cranberry production was increasing while sales, or usage, was flat or maybe even negative at times, leading up to oversupply or surplus of concentrated fruits.

“We, the growers and handlers, should therefore be aware of these trends and understand the consequences when we see them in the future,” Keefer said.

An oversupply is less of an issue for Quebec growers than for their West Coast counterparts. Unlike B.C. growers, who are mostly contracted to Ocean Spray, in Quebec, according to Patrick Bedard, co-owner, general manager and president with Canneberges Quebec, there is greater flexibility.

“It’s changing right now,” he says of the Quebec structure of sales and processing. “Between 10 to 20 per cent of production was sold to Ocean Spray last year. We have Atoka, they must be closer to 40 or 50 per cent of the market here in Quebec. [Atoka was purchased by Ocean Spray in January 2018.] This is why Ocean Spray wasn’t that big. Different companies organized themselves and started buying cranberries.”

According to Bedard, it’s a more independent model in Quebec. Bedard’s dad was one of the early cranberry growers in the province and is a co-owner of Fruit D’Or. Together with his dad, Bedard has 300 acres of cranberries planted in seven different varieties with plans for expansion.

“The growth in acreage [in Quebec] is probably because it is the most economical place to grow cranberries,” he says. “The land is cheap and perfectly suited for cranberry production. Lots of sand, lots of water. We have a way higher yield than what you can get in B.C. We’re exactly the same as what you can get in Wisconsin.”

That cheap land makes the difference between Quebec-based growers thriving and B.C. growers surviving. Bedard notes cranberry land can be purchased in Quebec for $3,000 to $5,000 an acre – a price unheard of on the West Coast.

“The market is very different in Quebec than it is in B.C., because our production costs are very, very low,” he says.

In challenging times, Quebec growers are able to hunker down and hang on, where B.C. growers may be looking at new options. Like B.C. growers, Bedard and others in Quebec have been increasing their efficiencies and reducing production costs as much as possible in order to be competitive, but it won’t reduce land costs.

“For us, it’s not a bad market,” Bedard says. “But for farmers in other markets, it probably is a bad market. We are able to survive at very low prices.”

“In 2018, Quebec dedicated a total of 9,966 acres to growing cranberries, according to the APCQ,” says Cameron Newbigging, media relations officer with Agriculture and Agri-Food Canada. “Of that, some 3,404 acres was dedicated to organic cranberries, while 6,562 acres was dedicated to conventional production. Quebec produces some 25 per cent of the world’s cranberries, making the province the second-most important cranberry producing region in the world and the most important producer of organic cranberries. The U.S. state of Wisconsin produces the most, while Massachusetts produces the third-most cranberries.”

Labour is one of the challenges common to both Quebec and B.C.

“We flood our farm, say, mid-December to produce ice to protect for winter, so we’re almost all alone to do that because everybody’s gone,” Bedard says, noting his off-shore workers generally leave by Dec. 15. “We’re having a hard time just keeping Quebec people here.”

Conventional growers spray for harmful insects at night to avoid spraying bees and other beneficial insects, but frost is an ongoing concern that has to be monitored. Growers will work all night during the approximately 30 frost nights in Quebec.

“It’s either a big crop or a very small crop if you miss even one frost night,” he says. “So that’s one of the challenges. Probably one of the biggest challenges we have.”

Other challenges are few (Bedard says there is almost no disease), but with Quebec using about one-third of its acreage for organic growth, there are fungi diseases that are generally controlled by the harsh winter climate.

“We do have challenges in pest control, but we are working to develop products and production techniques,” says Thomas of the organic crop. “For the conventional production, Quebec is no different than the other sectors of production in Canada
or the U.S.”

Insects are an issue in organic and growers use a harvest technique – flooding fields for 48 hours – to get control. Vinegar is used for weed control, as is hand weeding. Bedard’s farm is 100 per cent mechanically harvested, even the fresh crop.

“When I bought the first farm… we already had mechanical harvesting, I never had anything else,” he says.

Thomas agrees that mechanized harvesting helped develop the crop in that growers can harvest several fields a day (at about 25,000 pounds of cranberries per acre) using the flood and pump method.