Varroa mite management is a crucial task for beekeepers nowadays, and researchers are working on new tools to help in the fight. 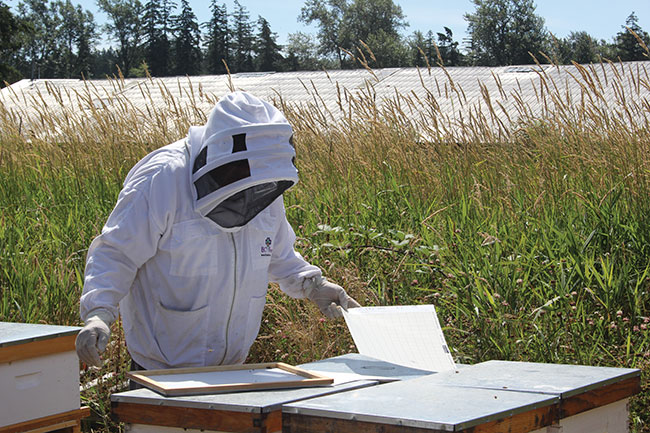 Erika Plettner (pictured right) is co-leading a project funded by Genome BC to develop a new acaricide that would work against varroa mites without also killing the honeybees. Photos courtesy of Erika Plettner.

“Many beekeepers I know, both hobby and professional, say beekeeping nowadays is more varroa management than anything else,” says Erika Plettner, chemistry professor at Simon Fraser University in British Columbia.

“The varroa is high on the list of factors that do eventually cause a colony to be lost.”

Varroa destructor mites have pestered beehives for decades. Existing chemical treatments “worked very well” for a while, Plettner says, as beekeepers applied them in rotation to remove the tiny parasites and prevent their reproduction.

But 30 years after first appearing in North America, the mites have evolved to evade some of the treatments, leaving them free to decimate honeybee populations by sucking blood and protein reserves out of adult bees and pupae.

Paul Kelly, research and apiary manager at the University of Guelph’s Honey Bee Research Centre, said even the most experienced beekeepers are not spared the devastation wrought by varroa mites, which can transmit deadly viral infections and weaken bees’ immune systems.

“The parasites are in every hive in all of North America, except Newfoundland, and in much of the world as well,” he says.

Beekeepers across Canada reported average overwinter colony losses of “very close to 50 per cent” this year, due in large part to the mites, Kelly adds.

“Now with resistance (to treatment) coming in, and also the mites vectoring some secondary diseases to the bees, the colonies just get weakened too much and that’s then what triggers their demise,” he says.

Beekeepers need a new line of defence, which is where Plettner’s research comes in. Collaborating with co-lead Leonard Foster from the University of British Columbia on a project funded by not-for-profit organization Genome BC, Plettner recently announced the discovery of a new acaricide that targets varroa mites without appearing to harm the bees.

“We need to caveat that – without harming the bee at the doses we’re using,” she says, noting researchers are still studying the compound’s “sublethal effect” in bees.

“Because if you give a lot of the compound, the bees are also affected. But not at the doses we’re using.” 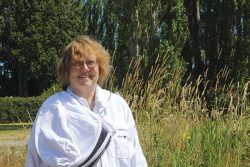 Plettner is keeping details of this new chemical compound – codenamed 3C36 – under wraps for now, as the research is ongoing and a long regulatory process still lies ahead. But she and her team are excited by the early returns.

In the project’s first stage, researchers placed sticky sheets under test colonies and analyzed what materials fell to the bottom of the hives. They found more dead mites under the hives treated with 3C36 than under the untreated control hives.

To further gauge the compound’s effectiveness as an acaricide, researchers are testing it at apiaries in Alberta and British Columbia.

“There is still quite a lot of work ahead of us to find the best dose to put in a colony and the actual mechanism of action,” Plettner says.

Should the compound continue to show promise after extensive lab and field tests, the team would then seek out licensing partners and apply for federal approval for its use.

The current research project will run until September 2023, and Plettner expects to publish initial findings later this year.

“Beekeepers are excited, but at the same time they concur with us that we have to be very careful. We have to do all the research step by step,” she says.

“Even though there is some level of desperation, we don’t want to make any mistakes.”

New approaches
At the Honey Bee Research Centre, Kelly wishes Plettner’s team well, noting every effort is needed to safeguard bee colonies against the varroa mite, which he calls “our number-one problem.”

“It sounds like this group is at a fairly early stage, but it sounds promising and I wish them luck in doing this,” he says.

Scientists at the research centre are trying out essential oils and organic acids to kill varroa mites without harming the bees. Kelly notes essential oils made of material extracted from oregano and thyme plants have performed well so far.

Natural products are effective, he explains, because they have “multiple modes of action on the mites,” meaning instead of a synthetic chemical disrupting one specific nerve ending, for example, natural insecticides attack multiple systems at once.

“Most of the synthetic products have a single mode of action, and the mites reproduce so quickly that if there’s any mutation, some of them will survive, and then they develop resistance,” Kelly explains.

“(Natural insecticides) hit it one way, they hit it another way, so there’s less likelihood of the mites developing resistance.”

Still ahead is the painstaking process of getting new treatments approved for commercial use by Health Canada’s Pest Management Regulatory Agency (PMRA).

“We’re working on it, but it takes a long time and you need deep pockets,” Kelly says.

Bee boxing
Another way to boost a hive’s resistance to varroa is by selectively breeding the bees best able to physically remove the mites by themselves. 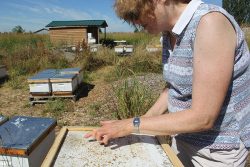 Even the most experienced beekeepers aren’t spared from varroa mite devastation.
Photo courtesy of Erika Plettner.

“If they can groom the mites off their bodies and kill them, then the mites are less of a problem,” Kelly says.

By breeding the bees that can best fight off the mites, future generations become better at it, too.

“But it’s difficult for beekeepers to measure that,” Kelly says. “You have to put a mite on a bee and score the fight – literally watch the reaction of an individual bee and give it a score, like you’re scoring a boxing match. That’s very labour-intensive.”

The simpler method to determine which bees are the most skilled groomers is for researchers to measure mite populations in spring and late summer and breed from the hives with the lowest varroa growth rate.

“That’s what we’re trying to encourage internationally. If everybody’s working away at that, we figure over time we’ll get there,” Kelly says.

“In the meantime, we’ve got to keep our bees alive.”

High stakes
Keeping honeybee colonies from collapsing is easier said than done when faced with varroa mite infestations that show no sign of slowing. The stakes are high for beekeepers and anyone who likes to eat.

“The figure we often use is one-third of the food humans eat benefits from bee pollination,” Kelly says. “I like to point out it’s the most delicious and nutritious component of our diet.”

Honeybees provide most of the pollination for apples, blueberries, almonds, canola and countless other fruit, vegetable, nut and seed crops. Replacing those efforts – which honeybees and fellow pollinators provide free of charge – would cost hundreds of millions of dollars annually in Canada and the United States alone, not to mention the much greater societal cost of food shortages.

“As a whole, (pollinators) are not faring so well, and that’s because of environmental degradation and climate change,” Plettner says.

“There are some really big forces out there, and they’re leading to changes in the plants that flower and all the resources that are available to the insects that depend on flowers.”

Another challenge for honeybees is the healthier their hives, the more mites show up. The winter of 2020-21 was not too cold or too warm, allowing bee colonies to emerge “in really good shape,” Kelly says.

But spring came about a month early, prompting the queen bees to start laying earlier, which provided more bee pupae for the mites to feast on. With control measures difficult to implement at that point of the season, the rapidly reproducing mites tore a swath through the hives.

How growers can help
As beekeepers await new varroa mite treatments, Plettner and Kelly say there are things farmers can do now to give pollinators a fighting chance. 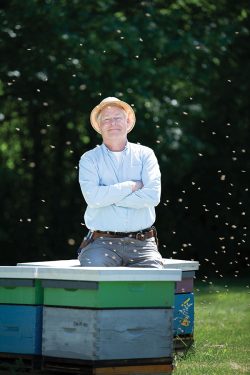 “If at all possible, cut back on herbicide use, especially in the areas that are not being farmed,” Plettner says. “So, around fields and between fields, leave as many floral resources, because a lot of insects that are pollinators feed on flowers.”

Not spraying roadside plants while allowing unused or marginal land to “rewild” gives bees somewhere to forage while flying in between fields, especially of wheat, soybeans and corn, which offer little nourishment to pollinators.

“Plants that we consider weeds might actually be a valuable source for certain bees,” Plettner says.

Kelly suggests reducing the wide use of insecticides such as neonics, which leave bees less able to fight off the mites.

“What I would encourage growers to do is try and choose the least toxic material to bees possible, and then try to time their sprays,” he says.

“They’re not actually allowed to spray insecticides when plants are in bloom, so that needs to be respected. And then consider the timing of sprays so that they’re done in the evening or early morning.”

Bees are less active at those times, Kelly explains, and the pesticides can dry on the plant before the insects reappear.

“If you spray in the middle of the day when bees are in that area, it’s going to have far more effect on them,” he says.

“As beekeepers, we understand that other farmers have their issues too that they need to be dealing with. We just have to do the best we can to consider each other.” •