Features Business Food Safety
Bringing the world to your farm 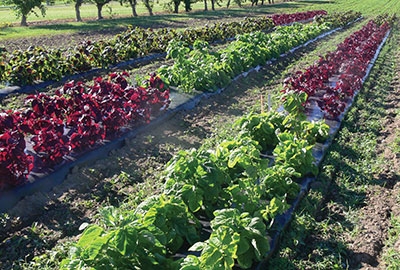 OMAF field specialists are working directly with faculty from various academic institutions and with growers on-farm to develop production and pest management information for a variety of specialty fruit, vegetable and grain crops, including amaranth. Ontario Ministry of Agriculture and Food and the Ministry of Rural Affairs

The road to success with any new and complex venture requires many things, including in-depth research, focussed care and a ton of passion. World vegetable cultivation is no exception.

The market for world crops cannot be denied. A FarmStart report entitled Growing International: Exploring The Demand For Culturally Appropriate Foods – Preferences For Ethno-Cultural Vegetables In The Greater Toronto Area states that in Toronto alone, Asian, Chinese and African/Caribbean consumers spend about $720 million each year on these foods. The report – written by University of Guelph researcher Dr. Glen Filson and his colleagues – pegs monthly Ontario sales of imported world veggies at about $62 million.

CIBC Institutional Equity research has found that Asian grocers in Canada are expanding their market reach enormously, with more than 90 stores presently in the Greater Toronto Area and probably 200 nationally. These stores are attracting more and more non-Asian customers – who are trying out more vegetables they’ve never consumed before – and CIBC says their total national food sales are comparable to those of Wal-Mart. It’s clear that locally-grown world crops are potentially a very big business.

Lots of new research is being done to support farmers who are thinking of taking the plunge. In September 2013, the Ontario government announced a $30 million Local Food Fund to assist in promoting Ontario-grown food, including the development and commercialization of world crops. Some of this funding may go towards studies at Vineland Research and Innovation Centre in Vineland Station, Ontario, where research into world veggies goes back to 2010.

“We are working with several commercial growers this year, with an aim of providing more and better support to farmers who want to embark on this journey,” says Dr. Michael Brownbridge, Vineland’s research director of horticultural production systems. “There is plenty of room for growth. The potential is fabulous for the crops we’re working on and several others.

“I would love things to be able to move faster for the growers,” he adds. “We want to get as much information, especially on the economics, out to growers as soon as possible so that they can decide whether to grow or not to grow, and have confidence in their decisions. In this aspect, we are working with economists at the Ontario Ministry of Agriculture and Food (OMAF). The financial information is obviously important on the ground, and also for financial institutions such as Farm Credit Canada to provide credit, insurance and so on.”

Brownbridge and research scientist John Zandstra (University of Guelph, Ridgetown Campus) will be running trials at both locations this year, with new varieties of eggplant and okra not grown currently in Ontario.

“We are looking to capture the genetics that produce good yields, good quality, disease and pest resistance in this climate, and that meet market requirements in terms of shape, colour, size and so on,” Brownbridge explains. Vineland is also working to connect players along the value chain in an effort to build closer relationships between world veggie growers and the retail sector.

Elford says it’s important to note that research into some ethnic vegetables started decades ago. He adds that growers across the province who are cultivating specialty vegetables “have played an important role in developing production information and creating new markets.”

One of these growers is Jason Persall of Persall Fine Foods Co. (Pristine Gourmet brand) in Waterford, Ont. About six years ago, he decided to grow edamame soybeans to continue expansion of their farm’s product line.

“Edamame is on trend with many of our customers,” Persall says. “As we are not new to food processing or marketing specialty foods, the challenge of adding edamame to our list was not really a hurdle for us. We have a great team and a great chain of partners in distribution. I have always loved producing food and doing something slightly different than the status quo.”

However, the road to growing ethnic veggies can be challenging. It took Dominic DeFilippis at Top Tomato Foods in Markham, Ont., most of a decade of trial and error to raise artichokes successfully in Ontario. At Carron Farms in Bradford Ont., they have had success growing East Indian red carrot (starting about a decade ago with trying different varieties and learning how to manage the crop), but tomatillos have been too labour-intensive and delicate to be profitable. While production of some varieties of Asian eggplant can be a challenge in the cooler agricultural climate of the Bradford Marsh, Brownbridge says they have proven to be a profitable alternative for several farmers in the Simcoe area and others. Not all crops grow well however, and Maca (a Peruvian root vegetable) and chia seeds have not been successful so far.

While cultivation success is obviously a must, the market also has to be there for a particular product.

“I would encourage growers to look at the changing demographics in their area (if they are changing) and also do some visits to markets and stores they wouldn’t normally visit to get a better understanding of what is entering the marketplace,” says Elford. “Growers have to consider who they are marketing to and if growing a specialty crop fits with their operation. Just because we can grow these crops doesn’t mean there is a market for them.”

Some ‘ethnic’ veggies being  grown in Ontario