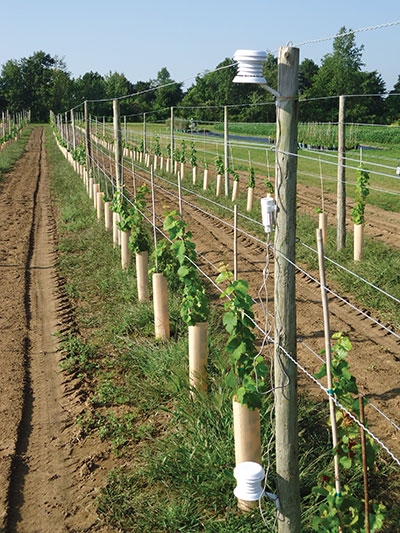 Ontario’s South Coast Wineries and Growers Association (OSCWGA), recently initiated a project to identify grape rootstocks resistant to Phylloxera and tolerant of severe winters, in an effort to improve the industry’s capacity in south central Ontario.

The project was undertaken at the University of Guelph’s Simcoe Research Station.

Phylloxera (Daktulosphaeria vitifoliae Fitch.), an endemic pest in eastern North America, is a small insect, similar to an aphid, that can feed on grapevine leaves and roots. Phylloxera feeding on roots can kill grapevines. A few Vitis riparia have been used as rootstock in Europe and North America. The rootstock is highly resistant to Phylloxera, and it has been used to improve winter survival. Also, it is native to southern Ontario and tolerates local weather and soil conditions. The development of rootstocks resistant to Phylloxera, while mitigating winter hardiness to scions, will help grape growers produce good quality grapes. The primary goal is to expand the industry in the sandy soils and severe winters in the south central region of Ontario.

The project has two goals: intermediate and long term. They include:

About 905 wild grape genotypes were collected from throughout southern Ontario (Norfolk, Brant, Oxford, Middlesex and Elgin, Kent, Haldimand, Prince Edward, Hastings, Frontenac and Grey counties). These were planted in three replicates at the Simcoe Research Station of the University of Guelph on May 17, 2013. We also planted 46 accessions from the Vineland collection and research vineyards (from France, Vermont, New York, New Jersey, Quebec, Minnesota, Manitoba, North Dakota, Montana, Illinois, Kansas, Colorado, Missouri, Wyoming, New Hampshire, Connecticut and Iowa). Most samples are V. riparia, but we also have some accessions from V. labrusca, V. aestivalis and V. rupestris.

The next step will be to evaluate the fruit quality and plant growth and survival rate of the clones and wild germplasm and to select the desired one for further investigation. The selected cultivars can be recommended to growers in this area. A grape cultivar needs to be grafted on the selected germplasm to study the behavior of the grafted plant and its fruit quality. The promising rootstocks will then be introduced to growers in this area.

Dr. Alireza Rahemi is a research associate with the department of plant agriculture at the University of Guelph.