It was all about quality.

It was all about quality.  The
B.C. Fruit Growers’ Association held its annual Horticultural Forum,
themed “Quality,” in Penticton, B.C. during mid-November. 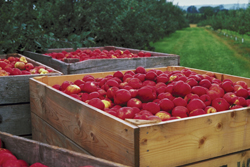 It was all about quality.  The B.C. Fruit Growers’ Association held its annual Horticultural Forum, themed “Quality,” in Penticton, B.C. during mid-November.

Weber explained. They are also facing increased competition from domestic packing houses, as 38 per cent of all fruit sold in the country goes to discount stores, which do not provide high returns for growers.

Weber believes planting new varieties is the key to survival. “During the last 30 years, growers always made more profit if they started a new variety,” he said. “The future challenges will be more in marketing and managing market introduction of new varieties.”

It was a sentiment echoed by BCFGA president Joe Sardinha who urged members to begin marketing their product more aggressively. He said consumers should be encouraged to buy homegrown apples and other domestic products, noting that Europeans eat significantly more apples than Canadians. If every British Columbian ate an apple a day, the province’s apple producers could sell their entire crop at home, he said.

Quality is also a key ingredient. Michael Mockler, a former produce director with Thrifty Foods of Victoria, B.C., told forum attendees that most consumers will pay more for top quality fruit, using the recent growth in sales of pineapples and avocados as an example. Pineapple sales in B.C. have more than tripled in the past three years to more than $9 million, due mainly to the fact producers are no longer shipping green product to market. Instead, fresher fruit are being shipped by air directly to the North American market.

“If you grow great product but don’t get it to the market in great condition, that’s your fault, not the retailers’,” he said.

One area of promise Mockler sees is the market for B.C. cherries, which have climbed to $6.9 million in 2005 from $3.8 million in 2002. “Don’t kill this market by undercutting your quality standards,” he warned.

Mockler added the organic sector remains a lucrative one for growers with sales up 40 per cent from 2004. “Retailers are begging for more organics and they want it year-round. Organics is the cash register star of the future.”

Three grower awards were also presented during the forum. The Golden Apple Award went to Jack and Adelia Marchial of Oliver, B.C., who farm apples, cherries and prunes. The Soft Fruit Award went to Thorp Orchards, also of Oliver, B.C., who produce about 10 hectares of cherries. The Compact Orchard Award was presented to Manjit and Shavinderjit Gill of Cawston, B.C. The couple and their two sons have eight hectares of Gala, Ambrosia and Granny Smith apples, which they converted to organic production in 1999.