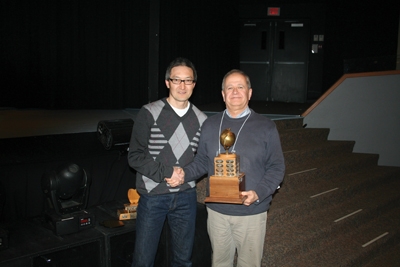 Tom Ouchi of Vernon, receives the 2010 Golden Apple Award during the B.C. Tree Fruit Horticultural Symposium, which was held in mid-March in Kelowna, and presented by the B.C. Fruit Growers’ Association.

The Soft Fruit Award was presented to Jake van Westen Jr. of Naramata, B.C. Jake Jr. is a second-generation grower with large plantings of Lapins, Sweetheart, Skeena and Sweetheart cherries (28 acres in total). He was raised and educated in the Penticton-Naramata area, and also worked as a carpenter for a period of time following school. He joined his father Jake Sr. in the orchard in 2002. Together, they now operate 14 acres of apples, as well as wine grapes.

The Golden Apple Award was presented to Tom Ouchi of Vernon, B.C.

Tom is a third-generation grower in the Bella Vista area of Vernon. His farm started out as a vegetable farm in the 1920s and transitioned to apples in the late 1950s. He currently produces 18 acres of mostly Ambrosia, Galas and Spartans, with some Fuji, Macintosh, Golden and Aurora apples. Tom also grows some peaches and has two acres of vegetables for the pick-your-own part of his business. Tom has a bachelor of commerce degree and was involved in real estate appraising prior to taking over the family farm.

The Compact Orchard Award was presented to Tarsem Dhoot from Lake Country.

“The Compact Orchard Award is basically awarded based on blocks of trees,” explained Campbell. “In this case, Tarsem won hands down with his Ambrosia block. It was excellent quality, excellent grades and sizes.”

Tarsem was born and educated in India. He moved to Canada in 1981 after receiving his bachelor and master degrees in agriculture. He worked in orchards and leased orchards until 1992, when his family purchased their current orchard in Lake Country. The orchard operates 10.5 acres of Ambrosia, Gala, and Macintosh apples.

The BCFGA received more than 15 nominations for the 2010 awards, most coming from field service and industry consultants.

“All of the orchards have to be very well managed and operated,” explained Campbell, adding judging is done during an on-site farm visit in the fall and is based on analysis of fruit quality, fruit size, per-acre yields and pack-outs. “It’s always a tough decision for us.”

He added that it usually takes an operation two to three years of nominations before they actually win an award and suggested producers encourage their field service technicians and crop consultants to continue nominating them.