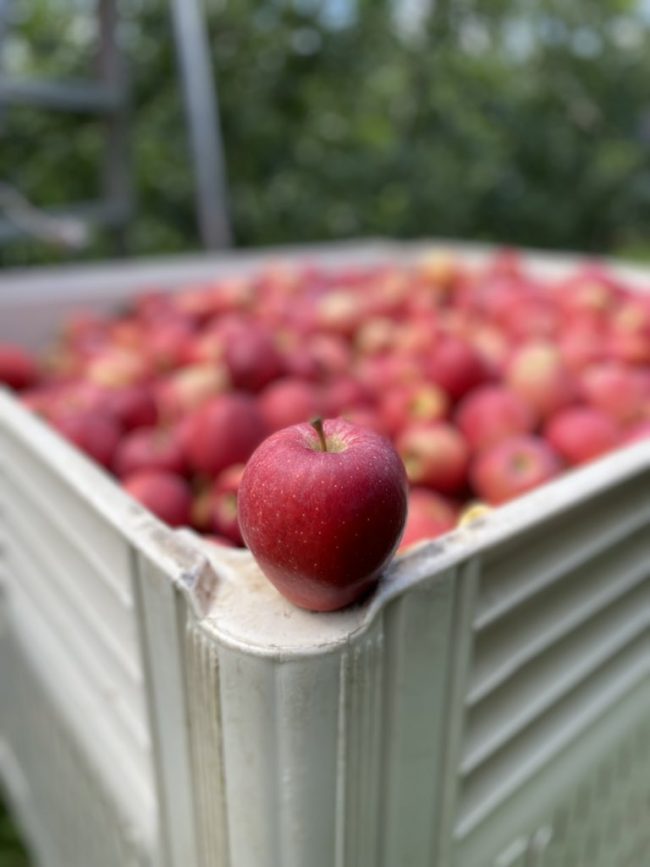 Are all apple microbiomes created equally? That is what a recent international study sought to determine.

Three researchers with Agriculture and Agri-Food Canada (AAFC) – Oualid Ellouz and Karin Schneider, plant pathology research scientist and assistant (respectively) with AAFC-Vineland in Ontario, and Shawkat Ali, plant pathology research scientist with AAFC-Kentville in Nova Scotia – took part in the first worldwide study on the apple fruit microbiome, as regards the assembly and composition of the microbial communities.

A report on the study and its results was published in early 2021 in Environmental Microbiology, a Society for Applied Microbiology (SfAM) journal. The AAFC-based authors have curated a few key points from the study below.

The microbial community colonizing the surface of apple peel, referred to as a “microbiome,” is the first defence against apple pathogens. This microbiome is involved in growth promotion, disease resistance, stress tolerance and fruit quality both before and after harvest. The microbiome factor is now included in breeding strategies for pre- and post-harvest disease control and management. Apples are the world’s largest edible fruit crop (86 million tons grown in 2018) and can remain in cold storage for up to a year. Knowing more about this microscopic world will provide insight into post-harvest diseases that occur during storage and lead to better quality and safer products for the consumer. That is why AAFC scientists joined international colleagues to study if apple microbiomes are the same around the world, despite differences in climate and management practices.

The apple cultivar “Gala” – a cross between “Kidd’s Orange Red” and “Golden Delicious” – represents a significant portion of global production and is grown extensively in all apple growing regions in the world. Gala apples were collected and analyzed from the USA, Canada, Uruguay, Italy, Spain, Switzerland, Turkey and Israel. Tissue samples were taken from the apple calyx-end, the stem-end and peel. DNA was isolated, amplified with PCR (polymerase chain reaction) and sequenced using next-generation sequencing to identify fungi and bacteria present in each tissue.

The teams found that the composition and structure of the fungal and bacterial communities vary and are highly dependent on geographical location. Ninety fungal and 57 bacterial classes were characterized; 75 per cent of the samples consisted of only six fungal and two bacterial genera. Turkey had the highest diversity of fungi and Spain the lowest; the western U.S. and Israel had the highest number of unique bacterial groups compared to other locations. Interestingly, the majority of the fungal core microbiome was made up of yeasts which are known to fight pre- and post-harvest pathogens. Penicillium sp., which causes blue mold in storage, was not found in the core fungal microbiome.

What have we learned from all this and how does this affect Canadian apple growers?

The regional differences have led scientists to propose the microbiomes shared between the domesticated apple and micro-organisms may have co-evolved together and adapted to local environments.

This research provides early information on the apple fruit microbiome, laying the groundwork for studying the complex microbial interactions on the apple fruit surface. Ultimately, this work will help scientists develop new approaches in the management of fruit quality and safety, as well as the reduction of fruit quality and quantity due to post-harvest micro-organisms. Paying greater attention to our local “microbiome” will ultimately lead to better long-term quality of produce and safer products for the consumer.

The full study report is available through Environmental Microbiology.