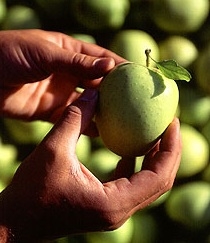 September 24, 2012, London, Ont – It’s a bad year for apples, at least in Ontario, and now, when that fruit should be appearing in grocery stores and when pick-your-own excursions should be in full swing, consumers are starting to realize just how bad it is.

It was well documented in the spring that unseasonably warm temperatures in March prompted premature blossoming of apple trees and then heavy frosts in April killed many of those blossoms.

“Basically most growers have hardly any crop at all,” says Brian Gilroy, chairperson of Ontario Apple Growers. He anticipates overall provincial production will be only about 15 per cent of the 10 million bushels normally expected. And since Ontario grows almost 40 per cent of the nation’s apples, the ramifications will be widespread.

McIntosh, Ontario’s No. 1 variety, “has been affected very severely in most areas,” says Gilroy, who has an apple farm near Meaford, Ont. Empire, second on the list, fared even worse. “The estimates are that we’ve lost 98 per cent of the Empire.”

The Gala variety “has come through better than most … and there’s going to be a few Northern Spies, but certainly not even a quarter of a crop.”

To add insult to injury, the cost of harvesting has skyrocketed because it’s so time-consuming and labour-intensive to search the trees for the few apples that might be marketable.

At the grocery store, prices for fresh Ontario apples don’t have to go up too much if the retailers take smaller margins, Gilroy says. But processed apple products “are going to be significantly more expensive … because the processors still need apples to meet their contracts for juice and pie filling.”

Of the other four apple-producing provinces – Quebec, British Columbia, Nova Scotia and New Brunswick, in diminishing order of production – only Quebec’s crop was affected by the unfavourable weather, but “to a lesser degree,” says Agriculture Canada. But western New York State and Michigan, the second- and third-largest apple-producing American states, are in the same position as Ontario – Michigan “maybe worse,” Gilroy says. Mexico’s crop is also down.